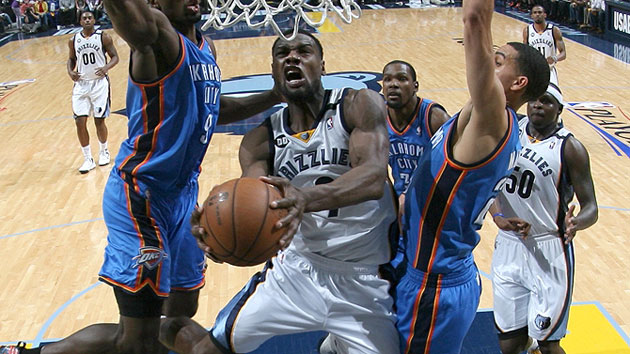 After blessing SLAMonline with the nERD Power Rankings throughout the season, our guys at numberFire are back to help us look at the postseason in an analytics-based way. So what do the algorithmic models say about the Grizzlies’ odds against Golden State, San Antonio and Miami? NumberFire’s Chief Editor is here with the answer.—Ed.

So maybe they’re for real.

Another night, another demolition of the Thunder despite poor shooting (now 4-0 in the Playoffs when shooting .442 eFG% or less). The Grizzlies have this whole winning thing down. In fact, with last night’s victory, Memphis now holds a 78.3 percent chance at taking the series and a 67.2 percent chance of not even letting the series get to Game 7.

Now, I know it’s generally not kosher to look ahead when the current series is still going on, but I’ve never been one to be superstitious. Kind of comes with the territory at a company whose entire goal is killing superstition with a Stats Hammer. So, let’s do just that and look ahead.

After watching them against the Thunder, I got curious: How would the Grizzlies be expected to do in a seven-game series against the Spurs or Warriors in the next round? Or, for that matter, how would they do against the not-quite-eventual-Eastern-Conference-champions-but-clearly-favored Heat in a potential finals matchup?

I had numberFire Chief Analyst Keith Goldner run the numbers. You may know that the Grizzlies hold the third-best odds at the title at 10.5 percent, but all they have to do is reach the Finals to have a legitimate chance. And given their odds against the Warriors and Spurs, that may just happen.

Most Likely Outcome: Memphis Grizzlies in 5

How Memphis Can Win: Letting regression to the mean run its course

So let’s start with the good news; I like to think I’m an optimist at heart. If the Warriors can pull the upset against the Spurs, the state of Tennessee should declare Stephen Curry Day in recognition of his giving the Grizzlies an easier road. Golden State is perhaps the best possible matchup for this team.

You know that whole deal about how the Warriors win mostly due to exceptional shooting performances? That won’t fly against Memphis. Especially considering the Grizzlies have allowed opposing point guards to only shoot a .461 effective field goal percentage (eFG%) and shooting guards to shoot a .449 eFG% against them this season, Golden State’s hot shooting should have a rougher time getting going.

Memphis holds the edge in every other facet of the game. Rebounding? Good luck getting by Zach Randolph and his fifth-best-in-the-NBA 19.3 percent total rebound rate. Turnovers? Memphis’ eighth-best offensive turnover rate and second-best defensive turnover rate would like to have a word with you. Free throws? Have you seen how often Golden State drives to the basket instead of taking the outside shot?

Let’s be realists: even tied 2-2, the Spurs still hold a 68 percent chance of beating the Warriors because of the two teams’ relative efficiency ratings. The most likely outcome for the Western Conference Finals right now is Spurs-Grizzlies, and it’s really not even close.

And if that is indeed the case, the Grizzlies aren’t as poor off as the seeds might have you believe. Given their strong defensive efficiency, the Grizzlies would hold about a 40 percent chance of taking down the Spurs, with their most likely win odds being in six games (15.71 percent).

The Warriors have provided a handy model for taking down the Spurs: just control the pace and don’t let them take easy shots. It seems overly simple, but the Spurs are 2-0 against the Warriors when shooting a .500 eFG% or above and 0-2 when shooting .421 eFG% or below. Given the Spurs’ .531 eFG% during the regular season, second-best in the NBA, it would stand to reason that the former would happen more often than the latter.

But holding down opponents’ shooting is kind of a Memphis specialty. Their .475 eFG% allowed to opponents during the regular season ranked third in the NBA. Through four games of the second round, OKC hasn’t topped .500 eFG% on them once (although a lack of a second option is a big reason). And the Grizzlies are now 17-12 overall on the season when shooting .442 eFG% or below themselves; they like to win ugly.

Unfortunately for Memphis, though, ugly may not be wholly sustainable. In their four games against Memphis during the regular season, San Antonio topped their average .531 eFG% in three of them.

Most Likely Outcome: Miami Heat in 5

How Memphis Can Win: Pray

This is where it starts to get ugly. According to our current odds, the Miami Heat hold a 53.7 percent chance of winning the NBA Title. That means if you were offered the Miami Heat or the entire rest of the NBA, the smart money right now would be on the Heat.

The only way to beat the Heat is to hope for a four-game string of low offensive efficiency performances. So far these Playoffs, they have had one in eight tries: a Game 1 .442 eFG% and 0.987 points-per-possession performance against the Chicago Bulls. Given those numbers’ distance from Miami’s .552 eFG% and 1.123 points-per-possession averages, it’s unreasonable to expect that type of performance for four games, even with Memphis’ defense.

As it stands right now, most teams would need an act of God to beat the Heat. That’s just how it stands. But given their odds against Oklahoma City, San Antonio and Golden State, the Grizzlies might want to get down on their knees quickly, because Miami may just be in their future. You can never start hoping and wishing too early.