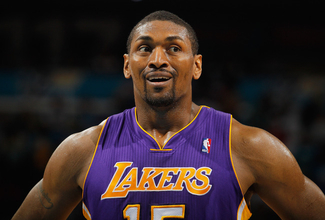 Having been cut loose by the Los Angeles Lakers, and clearing waivers, Metta World Peace has a number of choices available to him for 2013-’14.

MWP could play on either coast of the United States, or take his talents across the planet to China.

The New York Knicks, LA Clippers and Yao Ming’s Shanghai Sharks are all in play for World Peace’s services next season.

Per ESPN, Yahoo! Sports and the LA Times:

Knicks coach Mike Woodson said Sunday he welcomed a potential addition of World Peace. “I know his name has been surfacing out there,” Woodson said in Las Vegas, where New York has a summer league team competing. “I can coach any player. I coached guys from 18-, 19-, 20-year-old young men, and built a team in Atlanta, and that’s tough for a first-time coach. So I experienced that, and I don’t think there’s a player I can’t coach if he’s willing to be coached. … If anybody comes to this team, they’ve got to understand it’s all about team, man. It’s not about individuals here, it’s not about me as a coach. It’s about the New York franchise trying to win an NBA title. If you understand that, then we’ve got a chance. I like his skill sets a lot. I think a lot of teams have liked his skill sets over the years. He does a little bit of everything.” […] “I want to do something unique and fun,” World Peace said. “…China has over a billion people. It’s fun. I want to be adventurous. I’ve been thinking about it.”

“Of course I’m interested in Clippers,” World Peace texted on Sunday. “I have to meet them first.” The Clippers also are interested in speaking with World Peace, said NBA executives who were not authorized to speak publicly on the matter.

Four NBA teams have reportedly inquired about the 33-year-old forward, and the Knicks are believed to be the favorites to land him (even though, a couple of days ago, MWP said he’s moved past his boyhood dream of playing in New York).

Metta World Peace is on the down slope of his remarkable, 14-year NBA career. He averaged 12.4 points, five rebounds and 1.6 steals in 75 games for the Lakers last season. He’s now looking  — all over the world — for an adventure and to have fun with whatever basketball may be left in him.