Metta World Peace Thought About Retiring Prior to This Season 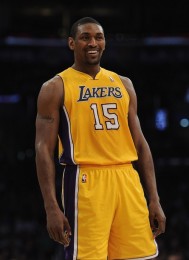 One of the more notable, peculiar and memorable careers in NBA history nearly came to an end last summer. Metta World Peace, formely Ron Artest, says that back pain had him seriously contemplating retirement.

A nerve doctor and a customized rehab program helped Metta stay in the League, and he has been able to bounce back from a humiliatingly bad season last year, which saw him post career-low numbers.

Before he changed his name to Metta World Peace, the Los Angeles Lakers forward was considering an even bigger life decision: retiring from the NBA. After scoring a season-high 26 points on 10-for-15 shooting in Wednesday’s 98-84 win over the San Antonio Spurs, World Peace told reporters that he was playing through a lumbar disorder in his lower back last season. The back pain, specifically affecting his L4 and L5 vertebrae, was also limiting the range of motion in his legs and feet, severely limiting his jumping ability.

“I just thought my body was maybe messed up,” World Peace said. “I was like, ‘Yeah, 15 years is a lot of years. I got two more years on my contract and I could potentially be done.'” World Peace was having trouble getting lift, even on wide-open layup attempts. “It controls your foot, the downward motion,” World Peace said. “So, if L4 and L5 is not working, or is compressed or inflamed, you might try to jump, but your foot, it’s not going to move. It’s not going to react.”

Metta World Peace’s numbers for the season are certainly not eye-popping by any measure — 7.1 points, 3.0 rebounds, 2.0 assists per night, and just connecting on 39.1% of his field goal attempts — but he is shooting better this month than he has all year (14.3 points, 54.2% from the field), and he says that he is “getting in more shape every day.”

With a renewed lease on his basketball life, Metta World Peace now talks of becoming more of a leader for the Los Angeles Lakers, especially now that Derek Fisher is no longer around. Imagine that.