Miami Heat One Victory Away from Winning the NBA Championship 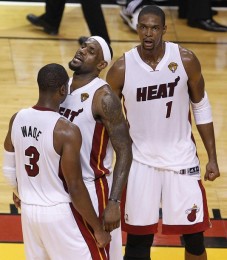 It took a complete team effort last night, with LeBron James hobbling due to a leg cramp and Russell Westbrook detonating. The Miami Heat needed contributions from several players to push themselves to the brink of winning the NBA championship.

He was effectively done with nearly 3 minutes left, after breaking a tie with one final cold-blooded 3-pointer. He had 25 points, 12 assists and nine rebounds at the time. But unlike in Cleveland, once it became clear somebody else had to lead Miami the rest of the way, there was no shortage of high-priced reinforcements. Dwyane Wade stepping up was no surprise; Mario Chalmers doing the same was only a mild one.

It’s strange to think that the defining moment of the Heat’s season so far might be when teammate Juwan Howard and trainer Jay Sabol went out onto the court to prop up James for the walk back to the bench, because he didn’t look strong enough to make it on his own. Or that the most important few points of James’ first title — no team has ever blown a 3-1 advantage in the finals — will have been scored by Chalmers, either on the nifty driving layup he slipped in with 44 seconds, or the two free throws two possessions later that sealed the win. If James resented any of it, he wasn’t letting on. Ditto for any lingering pain. “He was hurting,” Wade confirmed afterward. “But that’s what it’s about this time of the year. It would hurt more if we lose the ballgame, so it feels a little better if you can win it.”

Two years into their fascinating, endlessly-chronicled basketball experiment, the Miami Heat are at last on the verge of accomplishing what they were assembled to do.

And though the superstars will rightfully get most of the credit, last night was an important reminder of just how critical their supporting cast is to the whole enterprise.