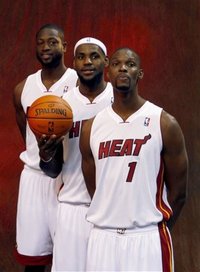 Given all of the craziness happening around the NBA at the moment, there is considerably less drama surrounding the Miami Heat this year (a stark contrast to last season, when they signed LeBron James, Chris Bosh and re-upped with Dwyane Wade.)

Just because less people are thinking, talking and writing about them doesn’t mean there’s any less pressure on the South Beachers. If anythng, the expectations for the Heat are higher than ever before — especially within the team’s own locker room.

“I think we’re the best team in the league and we’re going to work like it,” said forward Chris Bosh, “We’re looking to win it all. There’s nothing else left.” Makes sense considering the Heat lost in six games to Dallas in the NBA Finals last spring. Not even a seven-game Finals loss in the upcoming season would cut it.

“If we don’t win a championship, yes, it’s a bust year,” guard Dwyane Wade said. Unlike the other two card-carrying members of Miami’s Big Three, LeBron James didn’t offer a hurry-up-and-Tweet-it quote on winning a title. But don’t get the idea he doesn’t feel the same way. “That’s our goal, ultimately,” James said of a championship. “It’s a long ways from now. But it’s our goal. We didn’t come together to make the playoffs or come together to win a playoff series. We came together to win the NBA Finals. But we know it’s a long road. We’re going to take every step and not skip a step to try to get there. We’re not going to shortcut anything. … We just hope to have a better result if we hope to get back to that point.”

The Miami Heat are considered the favorites to win the 2012 NBA championship.

I suppose it’s a good thing that the team’s superstars seem to have wholly embraced the enormous challenge, pressure and expectations that come along with being considered the sure bet this season.