Michael Beasley: Lakers [and Timberwolves] the ‘Teams to Beat’ 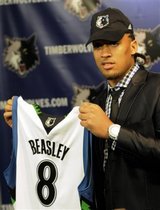 When the Miami Heat shipped Michael Beasley off to the NBA’s version of Siberia this summer, a lot of people saw it as some sort of death knell for the young forward. Beasley, however, looks at it in a positive light.

B-Easy says he likes the new surroundings, and tells the Minnesota Timberwolves’ official website that his team will not lay down for anyone next season. In fact, they and the Lakers are both contenders.

You try and figure these quotes out, because I certainly cannot:

Michael Beasley: “I think that speaks to Pat Riley, you know exactly who he is. Pat Riley is a winner, winner, winner, that’s pretty much all it is. They got three of the best guys in the NBA, they got the best role players in the NBA, you know they are trying to win championships and that’s what Pat Riley is all about. It is unfortunate they had to get rid of me but like I said, Pat Riley wins at any cost and that’s exactly what he did.”

Despite the confidence and ego, Michael Beasley and his new GM, David Kahn, aren’t going to win any NBA titles together in Minnesota. However, they are unbeatable in one very important category: unintentional comedy.