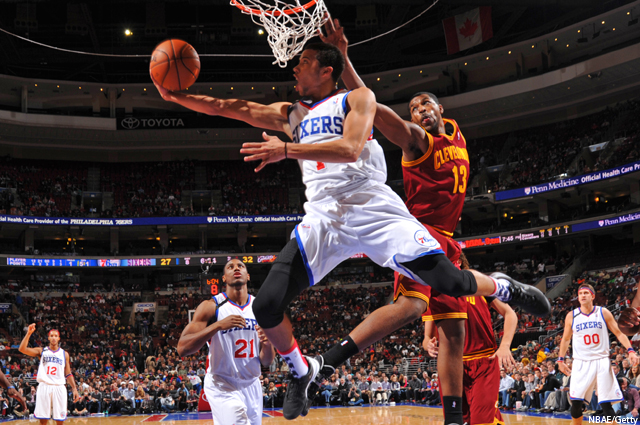 Who is this young punk?

“That was the first thing I thought,” says Philadelphia 76ers forward Thaddeus Young, of his reaction to Draft night 2013, laughing and nodding toward the locker to his right. There, amidst a mess of sneakers, athletic tape and personal belongings, hangs rookie Michael Carter-Williams’ No. 1 jersey.

Funny, since not even a half-season into his NBA career, Carter-Williams, aka MCW, has the rest of the League thinking the same thing.

Only, his explosion to open 2013-14 is no joke. MCW won’t play in tonight’s game, an early December home loss to the L.A. Clippers, as he recovers from a right knee infection. But over his first 15 contests, the Syracuse product’s numbers looked like this: 17.7 points, 7.3 assists, 5.8 boards and a League-leading 3.1 steals per game. His stats have held steady—dude leads NBA rookies in nearly every offensive statistic there is.

In his League debut, Carter-Williams made history against the defending champion Miami Heat. After cashing in his first two points on a steal and a breakaway dunk, the 22-year-old balled out to the tune of 22 points, 12 assists, 7 rebounds and 9 steals—a stat line no pro had produced since 1985—plus a game-sealing steal from a driving LeBron James. The performance was surprising, perhaps even to MCW himself, but only until his next game.

“I thought I was going to play well, but I didn’t know I was going to play that well,” Carter-Williams says, this time after a morning shootaround in Brooklyn, some six weeks after that eye-opening performance. He credits his confidence and his intense summer of workouts for his explosion out of the gate. “I think mentally, I was ready. I wasn’t really in awe of the stars in the NBA anymore. I wanted to go and compete against them.”

Miami hasn’t been the only victim. MCW notched his first triple-double in a double-OT win over the Orlando Magic and led Philly to a big-time victory over the Chicago Bulls with 26 points and 10 assists (a game he recalled as his favorite moment of the early part of his rookie season). Carter-Williams picked up Rookie of the Month honors for November and was so hot, in fact, that the conspiracy theorists came out of the woodwork, suggesting the Sixers might be milking his December knee injury for “tanking” purposes. In games without the 6-6 point guard in the lineup, Philly was just 1-10 at press time, and 7-19 overall. Internet-rumored “basketball reasons” be damned, the Sixers quite obviously missed his presence in the lineup.

Selected No. 11 overall in the 2013 Draft, five slots behind his future running mate and former AAU teammate Nerlens Noel, Carter-Williams is—with respect to Victor Oladipo and Trey Burke—the frontrunner for NBA Rookie of the Year, even if MCW says most of his goals are team goals. “At the end of the day,” he says, “it’s not really about me winning Rookie of the Year. Of course that would be nice. That would be awesome. But that’s only going to come if I focus on the team.”

No matter, his teammates are already on the campaign trail.

“He’s the best rookie right now, hands down. Not even close,” says Sixers guard Tony Wroten, with whom Carter-Williams has developed a strong bond. “He’s athletic, tall. He’s quicker than a lot of people think, he can shoot better than a lot of people think. In practice, we go at it. That’s the only way we’re going to get better. In training camp, we almost fought, because he’s trying to go at me, and I’m trying to go at him. But after practice, we’d go out to dinner with each other, because we’re close. We’re trying to make each other better.”

Coming up, Carter-Williams idolized Jason Kidd and Gary Payton, both bigger point guards. Still, others prefer to compare him to Penny Hardaway. But there might not be a perfect comp for the Hamilton, MA, native, given his unique blend of vision, handle and athleticism in such a smooth, lean frame. “My game’s not really like a lot of NBA guards,” says Carter-Williams. “Not to say it’s better, it’s just different. I’m 6-6, I’m a point guard, so I can use my length to create passing lanes, and I try to use my length on defense.”

Last season, as a sophomore at Syracuse, MCW bought into coach Jim Boeheim’s system, playing pass-first point man (11.9 ppg, 7.3 apg) and leading the Orange all the way to the Final Four. But this season, in first-year head coach Brett Brown’s up-tempo system, the precocious rook has been unleashed as a scorer.

“They’re two different roles,” Carter-Williams explains. “Last year, I had a lot of scorers on the team, and I set a lot of people up for baskets. This year, I’m able to play with a little bit more freedom.”

As with any rookie, there are still holes in his game. MCW openly points to his jumper, his defense and his turnovers as the biggest. But Brown is excited about the kid’s potential. “There’s no denying he’s a talent,” Brown told the Delaware County Daily Times, “and I’m glad he’s mine.” And with Carter-Williams’ locker sandwiched between older starters Young and Evan Turner, he is in a position—quite literally—to learn, whether simply by osmosis or by overt communication. So far, the vets have been pleased with his development.

“I’m not gonna lie, he was a little shaky at first,” Young says. “But as he got more into the motions and the flow of the game, and how it’s played, the physicality of the game, he’s been able to meet every expectation and step up to the level we need him to play at. He’s been amazing so far this season. He’s probably one of the better rookies I’ve seen come in and just do numbers. He’s been doing great things, he’s been spectacular out there on the court for us.”

True to tradition, the rook’s responsibilities extend beyond the hardwood. Which sometimes means menial chores, from retrieving Gatorades to producing an entire team’s worth of Chick-fil-A for long plane rides.

Should Carter-Williams take home Rookie of the Year this season, all those waffle fries will be worth it. Then again, by the time you read this, he may have already made a new addition to his household. “I think I need a dog in my life,” he opines while staring out at an abandoned Barclays Center floor. “I really like the Pitbull Boxer mix. I’m looking.”

Later, in the bowels of Barclays, Wroten busts MCW’s chops for recently picking up the guitar as a hobby (“I don’t know who he thinks he is. He don’t play it around me. I told him, I ain’t trying to hear all that, man.”). But word is, when he isn’t pumping jumpers in the gym or wolfing down Del Frisco’s in Center City, Carter-Williams can strum some 3 Doors Down and play a little Bob Marley already, and he’s getting pretty good. If he can pick up the guitar as fast as he’s adjusted to the NBA, he might soon have a second career in place. More like Young Funk.