A long-suffering sports city reached its apex when Michael Jordan made the Chicago Bulls the most popular team in the world. 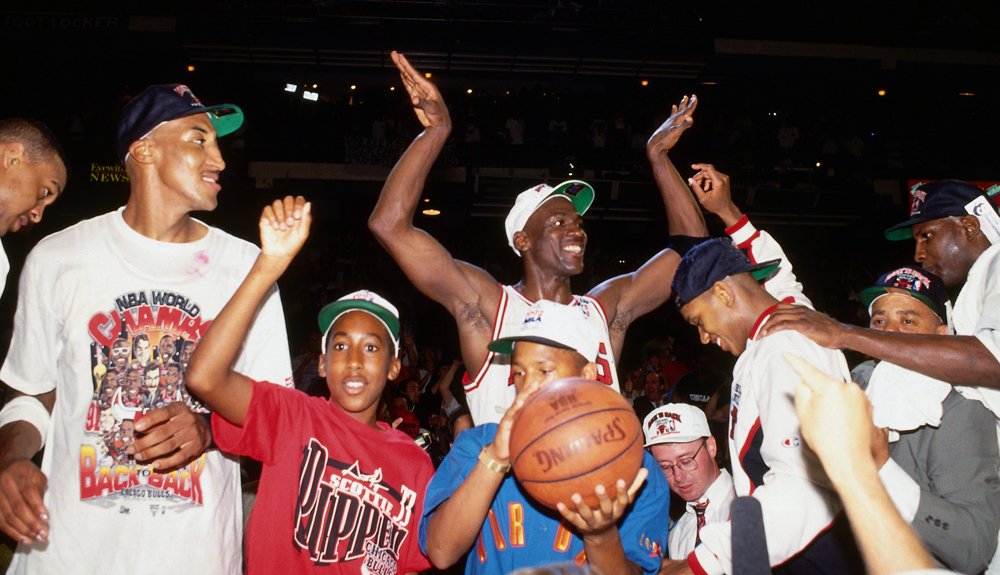 Say what you will about Bill Russell’s Celtics, Magic’s Showtime, Kobe’s Lakers, or even LeBron’s Heat.

But in this moment of preaching to the SLAM choir, there never has been, is not, and never will be anything like Michael Jordan’s Chicago Bulls of the 1990s, six-time Champions who were just a premature retirement and lamented lockout from potentially running the title table on the entire decade.

I was with them for the entire run, from a disbelieving, tearful, long-distance phone call with my father as the seconds ticked away on 1991’s Game 5 to bring home the first ring all the way to The Shot II, Bryon Russell cringing and Salt Lake City gasping in horror, while neighborhoods across Chicago erupted in cheers.

In a mere matter of years, Chicago was transformed internationally, from antiquated Al Capone references or tired Cubs jokes to the instant recognition of MJ, Scottie, The Worm, Horace, Phil, Pax, Kerr, The Dobermans, The Triangle, etc.

But really it was just one man who delivered us.

In 1994, I traveled to Guatemala. On the way, I read a Sports Illustrated cover story (“Bag it, Michael!”) trashing Chicago’s transformer in the aftermath of his father’s murder and the endless loop of yearlong limelight. His crime? Chasing a childhood dream on to the baseball diamond.

It was while climbing the ruins at Tikal that a young boy initially chided me as una gallina for fearfully descending steep steps from 200 feet. When we got to the bottom, he saw my Bulls t-shirt: “Michael Jordan! Michael Jordan! Slam dunk!” I laughed, and he wouldn’t stop.

We played a little shadow ball on the greens between pyramids and bid adios. And I left with my own personal peek into the Michael Jordan phenomenon.

Back in the day, Chicago was a pro basketball ghost town. The NBL, BAA and NBA all formed as a way to fill hockey arenas between games on the ice, for sure, but at least the New York Knickerbockers and Boston Celtics managed to draw fans.

Not so in the Second City. First came the American Gears, an NBL team starring local hero George Mikan that went out with a bang by winning the 1947 NBL title, then fancying itself enough to quit the league and form a new one; the Gears’ Professional Basketball League of America folded in a month.

Then came the Stags, a BAA post-season mainstay on the verge of trading for a little-known Bob Cousy when their lights were extinguished for good. The Packers became the first-ever NBA expansion franchise in 1961, squeezing the draft of future Hall of Famer Walt Bellamy, a name change to Zephyrs and a morph east into the Baltimore Bullets in a blinding two seasons.

Never one to take a hint (or let the burgeoning rival ABA get a piece of the Second City), the NBA expanded into Chicago a second time, five years later. Drawing on the exotic legacy of Gears, Stags, Packers and Zephyrs, new owner Dick Klein tipped his horns to the city’s, uh, meatpacking prowess (Toreadors and Matadors were also on the list) to create the Bulls.

The Bulls stumbled into success immediately, adding Jerry Sloan (The Original Bull) as their first player and managing the impossible task of reaching the Playoffs their first season. In a few years, the nucleus of a title contender was formed, but it was unceremoniously dismissed almost as quickly.

Sloan and Norm Van Lier, the backcourt cornerbacks of the black-and-blue 1970s Bulls, were human floor burns. For his trouble, Sloan earned a retired number and a head coaching shot, only to be pink-slipped after 215 games (freeing him to become a Hall of Famer piloting the Utah Jazz). Stormin’ Norman got a team-sanctioned addiction to painkillers yet, as the Frack to Sloan’s Frick, no jersey in the rafters. Bob Love and Chet Walker were the smoothest-scoring forward pairing of the ’70s, but Love was scrapped to the New Jersey Nets for a second-rounder. Walker made a gallant run through the ’75 Playoffs while harboring a bloody kidney, but the team wouldn’t pay his $470 hospital bill, then answered a 1975-76 holdout by invoking the reserve clause, essentially forcing the future Hall of Famer to retire at 35.

In 1984, this was this sort of legacy that Jordan inherited, a team that practiced at the gym of a downtown orphanage and ranked third-to-last in League attendance, a team that had been to the Playoffs once in the previous seven seasons and finished with a winning record in just two of the previous nine. The Bulls weren’t only riddled with losing and mismanagement, but listlessness, drug use and in-game concession stand snacking.

Four miles east was where the action was, as the NFL Bears appeared to be set for dominance. Their centerpiece, Walter Payton, was the greatest all-around running back most of us will ever see. It took Sweetness 10 years of middling football before getting his ring, as a member of one of the all-time greatest football teams, the 1985 Shufflin’ Crew, and as an encore da Bears threw away several chances at a dynasty, never even returning to the Super Bowl.

Thankfully for the aching sports fans of Chicago, MJ would completely change the city’s image and sporting culture. We didn’t know it then, but Jordan would give to us his own invincibility: Greatness without reservation.

Also in 1985, a sneaker hit the market that would revolutionize the worlds of sports, fashion and advertising, so scaring the NBA that it outright banned the kicks for uniform code violations. Three years later, the commercial for the AJ III appeared, a short clip with Spike Lee reprising Mars Blackmon, who claimed some serious hang time while dangling from a rim. The camera pulled away to reveal a certain 25-year-old incandescent superstar holding the diminutive director up on his shoulders. Jordan smirked and walked away, leaving Lee swaying. Air dunked, with Spike wailing, “Money, Money, why you gotta do that to me, why you gotta leave me hanging?” Shot in cheeky black-and-white chic just like Lee’s/Blackmon’s feature debut She’s Gotta Have It, the Air-Mars pairing would spawn years of ads. Jordan, as always, was übercool.

It’s as if MJ was so cool, he dared us to dislike him.

There was no way we could.

Looking back at a life of Bulls fandom, it’s hard to imagine ever feeling like an underdog or a loser. But there was a time when Jordan was thought to be heading down the George Gervin or Dominique Wilkins path, finishing his career without a Finals appearance, much less a ring. For Jordan (and just one Bulls Playoff game won in his first three seasons) the 1980s were strictly for individual accolades.

Which is not to say it wasn’t a decade filled with wonder, extending back to amateur work like his ’82 title-clincher as a UNC frosh and Gold-medal dominance in the ’84 Olympics. With the Bulls he hit the ground running, leading the team to wins in seven of its first nine and dropping 45 points on the San Antonio Spurs in just his ninth professional game. Jordan’s presence nearly doubled the woeful Chicago Stadium attendance from 6,254 per game to 11,885, as the phenom sailed through his rookie season and forced David Stern to order NBA cable broadcast partner WTBS to wedge more than the one scheduled Bulls game into the 1984-85 season slate. MJ chased an injury-shortened, 18-game regular season with a still-record 63-point ambush of the Boston Celtics in a double-OT Playoff loss in 1986, prompting Larry Bird to dub the young star as “God disguised as Michael Jordan.” In his third campaign he averaged 37.1 points—37.1 points—starting a streak of seven straight 30-plus scoring seasons snapped only by his first retirement in 1993.

In 1989, he shifted to point guard for 11 games and averaged a triple-double (10 triples in 11 games, with 33.6 points, 11.4 assists and 10.8 rebounds), and weeks later hit “The Shot” over Craig Ehlo to clinch his second-ever post-season series. He flew to two Dunk Contest titles in three tries, punctuating his hometown coronation in 1988 with a free-throw line slam for the ages. But for all the wonderment, MJ still was title-free.

Phase two of Jordan’s career saw the Bulls morph from the sideshow of Michael and the Jordanaires to invincible titlists. MJ remained the most lethal scorer outside of Wilt, leading the League in points scored in every full season he would ever play for the Bulls. But the supporting cast improved, most substantially with the additions of Scottie Pippen and Horace Grant in 1987. Coaching changes, with Phil Jackson taking over a top seat bookended by whip-smart assistants Tex Winter and Johnny Bach on either side of the ball, made an even greater impact on Chicago’s success.

And Air took off, pulling the Bulls into the sky with him. There was a stunning sweep of the repeat Champion Detroit Pistons in the 1991 Eastern finals, laying to rest the ghosts of Jordan Rules and Pip’s Migraine. Down 1-0 in the Finals vs L.A., Jordan’s “specTACular” gravity defying layup (the last of 13 consecutive baskets he made to fuel the blowout) spurred Chicago to four straight wins and a first title. There were six three-pointers in the first half of Game 1 vs Portland in the 1992 Finals, punctuated by his shrug toward Magic Johnson, broadcasting from the sideline. He averaged 41 points, 8.5 rebounds and 6.3 assists in beating down the Phoenix Suns in 1993 to complete the first NBA threepeat in 26 years.

After his baseball career, Jordan would win three more titles in the final three full seasons with the Bulls, starting with the 1996 win over Seattle to capitalize on a 72-10 regular season that bested any previous NBA dominance by three full games. The 1997 Finals were marked by heroism from Pippen (badly ratcheted back) and MJ (44 minutes, 38 points on 13-27 shooting, 7 rebounds, 5 assists, 3 steals, a block, and several empty IV bags rallying the Bulls to a Game 5 road win), while the 1998 repeat win over Utah was punctuated by his Game 6 winner over Russell, forever frozen in time.

Just a handful of games into his NBA career, Jordan admitted having some lofty goals: “I hope I can say I did my best, achieved a lot, and won a couple of world championships.”

That fact that those then-overarching goals seem laughably modest today tells you all you need to know about the man who combined winning basketball with individual dominance better than any player in professional basketball history, and across American sports as well.

The biggest beneficiaries of the largesse of this one man’s career? The good people of Chicago.

“Second City”? Not when it comes to hoops.
In Chicago—and everywhere else—the playground is no place for violence.
If you can make it on the streets of Chi-Town, you don’t need to make it anywhere.
Nike’s Chi-League is providing safe summer environments for Windy City youth.
The 50 greatest Chi-Town area basketball players of all-time.
Think Chicago basketball is all prep stars and the Bulls, with nothing in between? Time for a little College Hoops 101: The Windy City Edition.