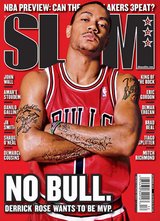 Given his individual dominance as a basketball player, and the Chicago Bulls‘ strong play this season, Derrick Rose‘s MVP candidacy was already carrying a strong case.

To the delight of Rose and Chicago Bulls fans everywhere, the stud point guard now also has the public support of the game’s greatest player.

Michael Jordan thinks Rose is the League MVP this year, but warns (from personal experience) that the award is by no means a guarantee.

The Chicago Tribune has the quotes:

“MVP of the season,” the Bobcats owner said Wednesday night after the Bulls downed his team 101-84. “He deserves it. He’s playing that well, without a doubt.” Then Jordan offered that sly smile. “And if he doesn’t get it, now he will see how I felt a lot of those years,” the Bulls’ Hall of Famer said.

“I wish man,” Rose said. “It’s great that he said that. It’s an honor. I’m speechless. But I’m just trying to keep winning. The award will come if we keep winning. I’m just trying to play hard and aggressive and with an edge.” Rose said he hopes to pick Jordan’s brains about winning in the future. “You always know when he’s in the building,” Rose said. “His presence is probably the craziest of all the NBA players who have played this game.”

Of course, MJ doesn’t have an official say in the matter. But it would be foolish to think that his opinion won’t matter when the media casts their votes at season’s end.

Not bad for a Chi-Town kid to get such a ringing endorsement from the city’s greatest sports hero.