Everyone knows he’s the greatest. Almost no one can get him to sit down and talk about it. We’re happy to be the exception. You asked for Michael Jordan. SLAM got him. 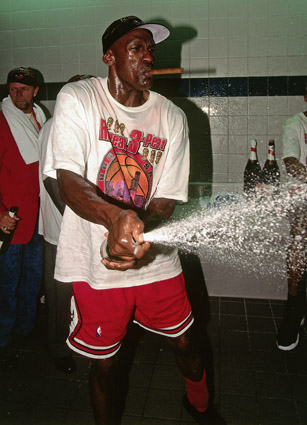 Today’s Michael Jordan’s 49th birthday, which is as good an excuse as any to run some classic SLAM x MJ content. Back in August 2006, SLAM celebrated its 100th issue the only way a basketball magazine born and raised in the 90s could—by placing Money himself on the cover. Additionally, then-EIC Ryan Jones was granted the opportunity to sit down with $ and ask him about, well, all sorts of things, and while the resulting conversation (obviously) graced the pages of the mag, it never ran online. Until now. Read SLAM 100’s cover story in its entirety below, and have a happy born day, Mike! —Ed.

It isn’t accurate to say that SLAM exists because of Michael Jordan. But it is fair to say we probably wouldn’t be here without him. Let me explain.

This magazine debuted in 1994—when, you might remember,  Michael Jordan was a minor league baseball player. He wouldn’t appear on a SLAM cover until our sixth issue, by which time he’d  returned to professional basketball; this was good news for the game in general and our little magazine in particular. Would we have lasted past that second year without Mike to carry the game? Probably. Maybe? Actually, it’s better that we never had to find out.

Personally, I never needed Michael Jordan. As a SoCal kid growing up in the 1980s, I had Magic, Cap, Big Game and the rest of the Showtime Lakers, which was more than enough. I had a dope team to cheer for, incredible players to idolize and an epic rivalry to fire me up. The only kid I knew who wasn’t a Laker fan was a Celtic fan, for which we killed him pretty much daily; beyond that, it sort of seemed like the rest of the NBA existed only to fill out the schedule.

Like most kids, I had a pretty narrow view of the world. Eventually, I figured things out. Seems a lot of people did need Mike, and a lot of other people who might not have actually needed him, billions of them, got down anyway. He had that effect on people. In a lot of ways, he still does.

Long before we counted the thousands of Reader Poll ballots you sent in, we had a feeling. We knew this issue needed to be epic, and that only a handful of cats could even be considered for the front page. But there are times—and this was one of them—when we’re a little too close to the game. We couldn’t call it, so we hit you, and we waited for a call back. Three questions, and three answers, would decide it.

Q: Who’s the best NBA player of the SLAM era?

Q: Who’s your favorite NBA player of the SLAM era?

A: Not even close.

That ended up being the easy part. The seemingly impossible came next. We gotta get Mike. Only Mike doesn’t need to get got. The truth is that, strictly speaking, we’d never really gotten Michael Jordan. Not completely, and not our way—our photographer, our interview, one on one. Worldwide exclusive, just like it says on the cover. But for this, there really was no choice. We needed Mike.

We got him back in December, believe it or not, on a single-digit day in Chicago. We got him after a few months of pitching and selling and asking very nicely and almost but not quite begging, and we got him, I’m certain, because we convinced Michael and the people he trusts that our readers and his truest fans are one and the same. You asked for it—demanded it, actually—and we passed on the message. Michael, to his credit, heard you loud and clear.

The occasion, held at a studio on the fringe of downtown Chicago, was a commercial shoot for the Jordan XXI, the predictably great clip featuring kids recreating classic MJ moments. Jordan’s role, as you’ve seen by now, is limited to those final few seconds: arms crossed, head nodding approval, a subtle smile on his face. The implication is that, like Michael, we’re watching the legacy—his DNA, according to the XXI’s ad campaign—being passed on to and embraced by the next generation. It’s a sales pitch, of course, but given where Michael is both personally and professionally, it’s an easy one to believe.

Michael Jordan is done playing basketball. We know that now, and with the likes of Kobe, LeBron, Dwyane, Carmelo and others doing their thing, that reality has gotten easier to accept. But it’s one thing to inherit DNA; cloning is another matter, and no one yet has managed to clone the total package of athleticism, work ethic, focus and ridiculous competitiveness that made Jordan the greatest to ever play the game. And we’re not expecting it to happen anytime soon—if ever. Even if one of these young cats can match his six rings and 32,292 points and five MVP trophies, it’s hard to imagine anyone equaling Mike. He was, and remains, singular. And that’s why we’re here.

It’s been years since Michael Jordan agreed to pose for the cover of a basketball magazine, or any magazine, really. Dude doesn’t need the press, doesn’t need to take time out for SLAM or anyone else, not to tell stories, not to sell shoes. But we’re glad that, just this once, he made an exception. And while we’d never claim to speak for the man, we think we know why he said yes. Asked if he still plays an active role in the design and production of his signature line, Jordan told us, “I will always be involved with something that has my name on it.”

SLAM: We’re here for a commercial shoot for the XXI, so let’s start with the shoes—two decades in, you’ve still got the hottest kicks in the game. Why do you think the brand has maintained such popularity?

Michael Jordan: Well, I’m not really surprised, because we’ve always been able to connect—connecting to kids and getting feedback, coming up with new concepts, finding new styles. The credit goes to our whole team, that we research it enough to figure out, OK, this is gonna be something kids really like. And I guess with feedback from the kids, we’ve been doing a pretty good job.

SLAM: Do you have a favorite?

SLAM: It’s rare in sports that everyone seems to agree on who’s the best player in a particular sport. How important is that legacy to you? Does it matter to you at all?

MJ: No. The fact that I’ve survived 20, 21 years, and to still have people talk about me—not like I’m dead, but just the impact I’ve had on the game. But when they start comparing who’s the best of all time, I never can accept that role, because there are a lot of guys who influenced my game, and if I didn’t see those guys, there’s no way my game would’ve evolved. So for me to steal things they’ve taught me and then get the credit is not fair. So I always step away from that.

SLAM: Just the same, your impact on the game, specifically on the next generation—marketing, endorsements, even the business model for guys like LeBron and Carmelo—is pretty much unprecedented. Which aspect of that are you proudest of?

MJ: What’s important to me is when they’ve been given these opportunities away from the game, it doesn’t affect what they’ve done on the court. I pride myself in terms of, no matter what endorsement contracts I signed, it never affected what I was doing on the court. The basketball court was always my refuge, in terms of where I could go and really be creative, and everything else fell off of that. And the thing I try to teach Carmelo and some of our athletes is that no matter how much we try to promote and market you as an individual and a person and a basketball player, you’ve still gotta go out and play the game of basketball—for the reasons you played the game from Day One, which is for the love of the game and not for the dollars that you get paid away from the game of basketball.

SLAM: Do you think that this sort of understanding is missing with a lot of the younger players coming up now?

MJ: No, it’s just something for us to teach ’em, to not be so quick to jump into. When we played, they didn’t have to market us as much as our game marketed ourselves. Today, it’s a little bit different. You market the players before their games have evolved. We want to make sure that if we’re gonna market a player, he can stand up to it.

SLAM: The prominent young guys in the game right now—do you think they’re doing a good job with that so far?

MJ: For the expectations they have to deal with, yeah. That’s a difference from when we were young. The expectations weren’t there. Now it’s way out there, and obviously I have to take some of the credit—or blame, either way you want to look at it—that more kids are coming in today looking at the business side of what their skills can provide for them instead of looking at what the game is gonna provide for them. So there’s a lot more of that, but I think that it’s unfair, because it’s tough pressure that they have to deal with, and we never had to deal with that. They’ve done a good job and have still been able to showcase their talents, which is ultimately how they’re gonna be remembered.

SLAM: Looking back on your own career now, is there a single moment that makes you the proudest?

MJ: That’s tough…I mean, you can think of bookends. Hitting my shot at North Carolina started everything for me, and hitting the shot in Utah pretty much ended—I mean, you got Washington after that, but I don’t count that. That’s some teaching, that wasn’t basketball at the highest level. But those are bookends for me. Those are two things that I guess engulf my whole career, from 1982 to 1998.

SLAM: To flip that, is there one disappointment that stands out?