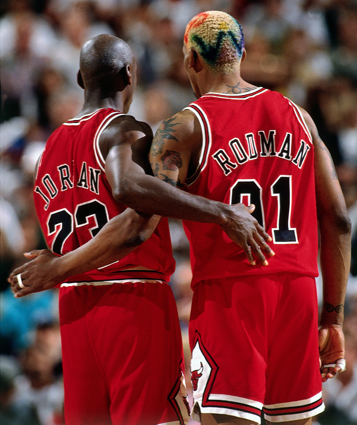 Michael Jordan, the greatest basketball player of all time, turns 50 years old this Sunday. We’ll be running a bunch of content over the next few days to celebrate, leading off with the feature below: an MJ interview conducted by Scoop Jackson that was originally published in SLAM 12 (July, ’96). Classic material.—Ed.

You guys. That’s how Michael Jordan refers to you if you have a mic in hand, if you’re media. It’s a generalization that many of us can do without, but coming from Mike…well, you know.

There’s a bit of ignorance in all of us “guys” that makes us think that Mike ain’t talking to us when he makes the reference. Once Mike acknowledges you, everything changes. You become best friends, roots. The mind games start: “You guys?” Naw, Money ain’t talkin’ to me. Mike’s my man. We tight. He knows me, calls me by name. He might be talkin’ to all these other chickenheads, but we go back like his old hairline. I’m special. He ain’t talkin’ to me.

Yeah, right. Wake up. Understand, Michael Jordan sees over 100,000,000 microphones a season. The hands and arms attached to those mics represent another world. “You guys” is as personal as it gets with Mike. And until you spend some time with him, you don’t understand how lucky you are. “You guys” becomes special, an endearing term. Soon, you begin to realize that, as general as it is, it’s not often that you get to hear those words. Jordan’s rules.

“You guys need me?” Michael Jordan sticks his head out of the back door in the Chicago Bulls locker room. Nobody moves. Scottie and Dennis have everybody on lock down. Mike shrugs, “Cool.” As he turns to exit, a small hand grabs his arm. A front. “Yo Mike, who’s the last person to beat you in a one-on-one?” It’s been one year since he came back to the stage, and 14 years since he introduced himself to the world and Georgetown. He’s gone the distance to prove that. No doubt, he’s the baddest mf that’s ever going to play ball, but there are still places he won’t go. This is one of them. For a man who has built his entire life on relevance, having substance and meaning, trivial pursuits (dumb-ass questions) simply aren’t his steelo. With a classic, no-you-don’t-stop-me-for-that look, he puts my head to bed. No answer. You guys are a trip.

Two weeks later. After serving the Knicks to solidify the league MVP drama, Jordan steps away from the horde of mics and lights and enters another zone. He spots the naps and gives me the nod; I follow. As we exit the shelter, leaving all other media behind to fiend for more locker room quotes, Mike puts his arm around my shoulder and asks, “Did you get that?”

Then he drops the image, “No problem Dog, anytime.” Dog. The universal term of kinship, brothahood…friendship. Me and Mike. No mo’ Mars. As Patrick  Ewing and Charles Oakley push me aside for more pressing conversation, I give Mike a pound; he gives me the wink. What else are friends for? Oh, by the way, this is what Money gave his Dog:

SLAM: Your love for basketball. How deep is it?

MJ: My love for the game is very deep right now. It’s as deep as it’s ever been. That’s why I came back last year. I enjoyed baseball after I retired, but basketball gives me something more. I have never enjoyed a season as much as the one we are having right now. Scottie has matured, and the team has really gelled. The guys on this team really get along; there is no jealousy or animosity. We just play ball, win and have fun.

SLAM: Are you in a groove?

MJ: I don’t know—you tell me. I feel very comfortable. I feel in control of my game. I feel like I’m right back at the same level that I was at before I retired, maybe in some ways better mentally. I worked real hard to get back to where I am.

SLAM: But I mean, right now you’re rollin’. Your game is on-on, you know what I’m sayin’? What does it feels like when you get in one of these grooves? What goes through your mind?

SLAM: Is that hard?

MJ: Yeah it’s hard. Especially if everybody doesn’t take it the same way, or take the seriousness of it every single night. I mean, I joke and I kid around, but once I step in between those lines, I like to maintain the same attitude I had the game before, you know?

SLAM: OK, let’s go back. The game of basketball itself is one of culture. As a brotha who’s considered the essence of the culture, explain to me what you feel the importance of streetball is to the total game and what it represents?

MJ: I think playing basketball on the street is what the game should be about. Especially for the youngsters. I will encourage my kids to go out with their friends to the playgrounds, get a game and play. For as long as they want. You develop friendships, competition and teamwork on the playground. I can’t imagine a better way to spend time.

SLAM: Were you a playground legend?

MJ: [Giving up that look again] Next…

SLAM: So are pick-up games still important to you? I mean, I heard your brother Larry used to…

MJ: Man, my older brother Larry used to kill me! He was older and bigger than me. He would beat me, talk to me and not let me forget about it. What that did for me was make me work that much harder to beat him. He had no idea that I was going to end up taller than him. I look at my games with him as a great experience when I was young, because I developed my love for the game and it made me work harder to get better.

SLAM: So besides Larry, who’s the best ballplayer that you’ve played against that we’ve never heard of?

MJ: I was different. Growing up in North Carolina, I wasn’t exposed to basketball nationally—I just followed North Carolina and wanted to go there. I used to watch David Thompson and Walter Davis. Then when I met and talked to [Coach] Dean Smith, I knew…

SLAM: You knew what?

SLAM: What means the most to you right now?

SLAM: It’s crunch time now—aren’t you getting tired? I mean, this is your first full season back in a couple. Wassup? You’re making it hard for Phil to give you some rest.

MJ: You should know me by now—I haven’t changed. This is the most challenging part of the season, and I thrive on it, on this type of competitiveness. I just try to elevate my game and everyone else’s game surrounding me. To some degree, that’s the type of thing I thrive on; I enjoy it. I want to make it tough for Phil to take me out, because I enjoy playing in these types of circumstances. Hey Dog, I’m getting old, and I may not get these thrills too often anymore [laughs].