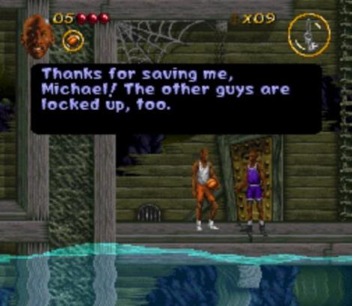 Michael Jordan is back on the basketball court. Well, n

ot exactly in real life. But he’s going to be in the latest game of the popular NBA 2K video game series, NBA 2K11. And he is going to be the cover athlete in this edition. Not only is he on the cover and playable… but he’s going to help develop the game with the makers of the NBA 2K series, Take Two Interactive Software.

We all know Michael Jordan is possibly the biggest icon in NBA history. Even in video games, he was quite difficult to get a hold of. The reasons were mostly for licensing issues. Old NBA series like NBA Shootout by Sony for the PlayStation (anyone remember that?) settled for filling in “ROSTER GUARD” in Jordan’s place. Sony couldn’t use Jordan’s likeness but they definitely gave Jordan’s attributes to the character.

Jordan Vs Bird: The player can pick either Jordan or Larry Bird in a one-on-one contest, 3-point shootout, or slam dunk contest. I wasn’t too impressed with this game when I first played it for the old 8-Bit Nintendo.

Space Jam: This was pretty much a homeless man’s version of the beloved NBA JAM. Well, there are some mini-games in here that can actually increase the attributes of the characters in an attempt to make the game a little more versatile. Other than that, unless you really, really wanted everything Space Jam-related or you were 8 years old, this game wa

s a total waste of time. I should know. My nephew owned it at one time.

Chaos In The Windy City: This wasn’t a basketball game at all. This was more of an action-type game in the lines of Super Mario Bros. The premise was that Jordan’s teammates for a charity All-Star game went missing and he had to rescue them. OK, now that I think about it… the premise makes this game more similar to Michael Jackson’s Moonwalker. To help him in his quest, he uses basketballs to attack the bad guys. He can power those basketballs up, too, along the way (ex. Flaming Basketball, Basketball Bombs, etc.).

Yeah, I have played this game a couple of times and, at the time, I didn’t think it played too bad. It controlled pretty well and it was, for a lack of a better term, interesting. But it was because of the awful premise that Chaos In The Windy City is generally regarded as one of the worst video games of all-time. I’d love to play it again because I like playing “terrible games.” But don’t mind me; I’m just insane.

So that laundry list of games Michael Jordan was in weren’t exactly the most impressive. But this pretty much mirrors Jordan’s attitude: he always wants to get better. And for his next video game endorsement, he can hardly get better than being on the cover of NBA 2K11. The NBA 2K series has been superior for a long time. In addition to having a game that plays pretty close to a real NBA game, their covers have been one of their biggest selling points. In the last few years, the covers had actually been announced during the NBA Finals so that has become an event in itself. Michael Jordan is also quite the departure from all the previous NBA 2K covers. Normally, the 2K Sports crew from Take Two gets active NBA superstars for their covers so this is the first time the NBA 2K series went for a legend as a cover athlete. Jordan joins this list of great players…

Allen Iverson: Iverson was on the cover for five consecutive seasons (NBA 2K through NBA 2K4). He was a rising star when Take Two first got a hold of him and, in 2001 (before the 2K2 cover), he won the Most Valuable Player award. Definitely the right face for the fledgling series at the time.

Ben Wallace: Wallace snagged the cover of NBA 2K5 after the workmanlike Detroit Pistons won the title. Felt it was a good choice as Wallace was the

heart and soul of that team.

Shaquille O’Neal: The Big Whatever-You-Want-To-Call-Him became the cover athlete for NBA 2K6 after he rejuvenated his career in Miami. He actually won a championship with Dwyane Wade after that season so he was brought back a second straight time for NBA 2K7.

Chris Paul: We all thought CP3 was a nice up-and-coming star when he was named as the NBA 2K8 cover athlete. Maybe it’s the power of the 2K cover but he went on to have an MVP-type of season and led the Hornets to 56 wins and the second round of the Playoffs.

Kevin Garnett: KG, who was MVP at one time (2004), got to be the NBA 2K9 cover boy right before he played his first game of the Finals. He would win the championship two weeks later.

Kobe Bryant: We all know Kobe Bryant is still regarded as one of the best players in the game today. He had pretty much the same scenario as Garnett. Kobe would also win an NBA championship about two weeks after he was bestowed the honor of being the NBA 2K10 cover athlete.

So this list isn’t too shabby. And I’m personally very excited that Michael Jordan gets to be on the cover of what I think is the best NBA video game series today, NBA 2K. The NBA 2K games keep getting better and better and I believe Jordan’s name and touch will take this series to another level.

Though I’m sure Kobe Bryant is going to enjoy this, too. For the first time in his life, Michael Jordan is actually following Kobe Bryant on something.

Rey Moralde is the founder and editor of TheNoLookPass.com.