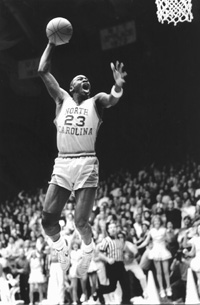 This might sound a little corny, but the picture of MJ crying with his dad after winning his first title is a real emotional photograph for me.

Imagine working on your dream, your passion, for 20 years or more, working day and night to prove that you are the best at what you do. You fail, you succeed, you fail, you succeed, and when you finally get the opportunity to bring it at a time when you have been tested so long, and you win the opportunity to see the fruits of your labor, this is a depiction of that scenario and a true embodiment of what life is about to me. In my eyes, I believe there is fact that shows that Michael is the greatest player to ever play the game of basketball, and quite possibly the greatest athlete in the history of professional sports worl

dwide. His dad, James Jordan, who was his life-long inspiration, died two years after seeing his son’s dream into fruition.

Michael wasn’t my favorite player when I started following basketball at age 10. My boy was Jim Jackson, famously (to me) of the Dallas Mavericks. A high-scoring, multi-tool perimeter player who in some ways was very similar to another one of my favorite players, Scottie Pippen (though Jimmy was not the defender that Scottie was, or as uniquely strange in athleticism as Scottie had been). Jimmy wasn’t what many people thought of when favorite ball players are considered, but he was talented and stood out in a way that seemed a little Jordan-esque, at least coming out of Ohio State and Toledo Macomber High.

For me, being a young fan of the game and then growing to be in my current mid-20s, Mike was and is someone who transcends the game of basketball itself. I didn’t have to think about his being the best, he was the best, and still is the best. Even though our old friend from SLAM, Scoop Jackson, called him “God” (which is something that as a spiritual guy, as a Christ-believer, on the surface I consider it blasphemous, but I understand in the reasoning that really it’s the God that’s in MJ doing those incredible things), I comprehend what Scoop meant. His Airness was the closest to seeing God play on the hardwood. By standards of the NBA, Michael was average. He was around the average in height (measuring at 6-6 ¾—he was really about 6-8 in shoes), going between 195 and 230 in his weight, and with above-average arm measurements, superficially, he wasn’t supposed to be what he became, and that makes him all the greater.

In truth, this isn’t hero worship (at least it’s not meant to be). My calling Jordan the greatest athlete of all-time doesn’t mean I think he’s the greatest human being forever, and for those who expect that athletes should be held in the height of truly great people who actually make social differences and improvements in our world should probably re-evaluate their standards. This is about recognizing a man, who at 47, is still su

ch a cultural icon, a man whose significance is so great in the fabric of the game to the extent that this very magazine and corresponding website would probably cease to exist—he’s the reason the NBA has abounded to its worldwide stature.

It’s amazing to know that MJ is celebrating his 25 years of relevance in the League through his shoes. I used to wear L.A. Gears, adidas, Reeboks, Keds and Nike Air Force basketball shoes, but when I first was able to get a pair of Air Jordan XIIs, I knew then I loved Jordan the player because everything else associated with him seemed all the greater. I bought Rayovac batteries instead Duracell because of him; I started getting the first release of his signature shoes every November as my primary basketball shoes for the year (some of my friends were able to get multiple colors in the same models—I wasn’t as blessed or as spoiled, I had to get down and throw down some ducats for my ****, son!); I already loved Mickey D’s Chicken McNuggets and I got hip to Gatorade at Nike camp in ’97. The point is as much as I appreciated his gifts and talent, I grew to have a significant respect for him as a player and his contributions to the game I now love.

So, here’s a happy birthday well-wish to the greatest, and a personal thank you for letting me witness one of the best executions of perseverance and dedication to talent and pure passion in recorded history.

Sandy Dover is a novelist/writer, artist and fitness enthusiast, as well as an unrepentant Prince fan (for real). You can find Sandy frequently here at SLAMonline, as well as at Facebook, Associated Content and Twitter.