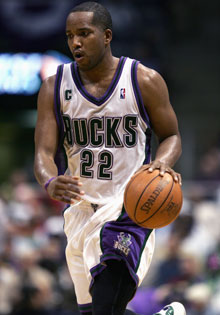 Where is Michael Redd?

“Still working out, training, planning to play with somebody next year,” said the former All-Star, now 33. “I’d love to play on a contender to let the League know that I can still play after having gone through what I’ve gone through.”

Before you say that he’s too old or that his knees can’t take another 82 games, remember that he’s a shooter. Shooters find ways to put the ball in the basket on off-nights, find new angles in the air when a defender closes out. Shooters keep shooting, no matter what.

Redd built a home on the perimeter over 11 seasons with the Bucks with career averages of 38 percent from beyond the arc to go along with 19 points a game. Despite tearing both his ACL and MCL in his left knee twice, missing multiple seasons (including last season), Redd doesn’t feel like he has taken his last shot yet.

It’s been five years since Redd helped USA’s “Redeem Team” win Gold in the 2008 Olympics in Beijing, the pinnacle of his career. But more than time has passed since then—who Redd used to be, who he wanted to be and who he could have been have disappeared as well.

After recovering from the first ACL and MCL tears suffered in January 2009, Redd re-tore both ligaments in the same knee almost a year later in January 2010, playing just 61 games total over his last three seasons with the Bucks (2008-11).

“The first injury was just: I’ll be back soon, just a bump in the road. Nothing career-ending,” he said. “But I came back too soon. After the second injury, I had two emotions: an extreme high in one moment from the Olympics, and then the very next moment, an extreme low. That was a dark time, really dark. It was like, this was not supposed to happen again.”

In professional basketball, your health is your roster spot, and with his knees never quite the same, all Redd had was memories of the star he worked tirelessly to become. Could he come back? Was his career over? Doubts crept in as mentally and physically exhausting rehab consumed him. Forget representing America as one of the 12 top basketball players in the country—Redd just hoped to for a spot on one of the League’s 30 teams.

“If you look at it, I’m the only one from that Olympic team still not in the NBA. That plays with your mind,” he said, pausing a few seconds. “I have faith in God. I’m a Christian, but you begin to ask those questions: Why me out of all the players? There’s a reason, a purpose behind it, and I had to come to grips with that.

That’s when his shooter’s mentality came into play. To revitalize his career, Redd had to embrace the short-term memory that allowed him to drain over 1,000 career threes, putting the past behind him to look for the next opportunity.

“I was determined to not end my career like that,” Redd said. “I want to be able to walk off the court when it’s time [to retire], rather than get carried off.”

After parting ways with Milwaukee, Redd joined the Suns for the ’11-12 season. Yet despite putting up 19 double-digit games off the bench with an 8.2 ppg average in just 15.1 minutes a night, Redd wasn’t picked up in the offseason. While he trained on his own this past year, he was able to simultaneously give his body the rest it needed.

As veteran-heavy squads like the Spurs go deeper in the Playoffs, it’s clear there’s still a place for vets like Redd, players who are efficient, smart, fundamentally skilled and proven. But itching to put on an NBA uniform again is nothing new for Redd, who had to prove himself coming out of Ohio State after being selected in the second round—43rd overall in the 2000 Draft—and over a decade later wound up fourth on the Bucks’ all-time scoring list with 11,554 points.

“No one would ever imagine that I would be what I became as a late pick,” he said. “My whole career has been overcoming. I look at this situation now as the same thing.

“My body feels terrific, the best it’s felt in years, actually. I’m a better player now, even though I’ve gotten older. It made me a better person, too. There’s a fire that’s still within me. I know if I got the opportunity to play I know I will produce.”