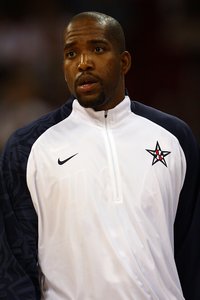 The Milwaukee Bucks have undergone a lot of change of late. They’ve hired a new coach; acquired Richard Jefferson; traded away their high-priced (and high-scoring) point guard; and inked Andrew Bogut to a massive extension.

Through all of the changes however, one thing remains constant: The team’s biggest star, Michael Redd. But Redd didn’t think things would turn out this way; he didn’t expect to be wearing a Bucks uniform come opening night.

“Out of everybody, I’m still here,” said Redd, part of the US Olympic team in Beijing. “We have a whole new roster, a whole new group of guys. I was shocked that I remained.

“I thought with the rebuilding of the team and the changing of coaches and the organization moving in different ways, I thought I might be gone, too. Hey, I’m here.”

Take it easy, Mike. The Bucks were trying to improve (and cut costs where they could); they weren’t attempting to revert back to total irrelevancy.