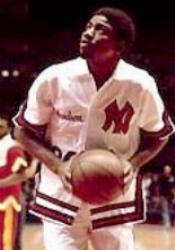 I already wrote a little bit about the Micheal Ray Richardson comments for the D.A.Y., and I was just going to let it die off, but a funny thing happened on my way back from Subway. (I no longer frequent Quizno’s ever since the suicide episode and the expose in the Times.) The Mitzvah tanks are out in full force, which happens every year around Passover time. As I was crossing the street, a young Hasidic boy, who must have been 12 years old at the very most, accosted me and asked if I was Jewish. I froze up and forgot to lie, and he started following me across the street, asking all kinds of personal questions.

He was really annoying me, and would not take no for an answer. He almost got hit by a car crossing the street after me, and finally gave up and found someone else to harass. But, I feel that his presence was a sign for me to write this post. Micheal Ray Richardson has been suspended because he made generalizations based in perceived reality about another race. Why he said it, I do not know. The best take I have seen on this issue is from Joey over at Straight Bangin’, and that’s only partially because he’s been at the forefront of pointing out the Jim Jones movement to make sure people know his lawyers are Jewish just like Jim would want people to know his car is a Mercedes. Yahoo’s Adrian Wojnarowski has a slightly more doomsdayish approach, but I’m with Joey on this one.

Micheal Ray’s words are not nearly as bad as the Reggie White racial philosophy course, Tim Hardaway’s seminar on his personal convictions, or his unfortunate semi-namesake Kramer’s summertime ramblings. Micheal Ray’s words are more of a “What do you possibly have to gain by saying this?” moment. This whole story makes me wish it was the weekend already and the Final 4 was on right now. By the way, the National Championship is on Monday night, which is the first night of Passover. If there is a Jewish power conglomerate that runs the NCAA, they really need to hire some better schedule makers.