Mike Brown Stood Up to LeBron James, Motivated Him 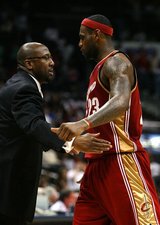 One of the easiest (most often repeated) jokes to make, is that LeBron is not only the Cavs’ best player, he’s also really their coach. That’s how a lot of people view the pecking order in Cleveland — all you have to do is ask those with really good seats near the Cavs’ bench — with Mike Brown being something of a placeholder.

Last night in Detroit, things took a dramatic turn in the relationship, as Brown got up in ‘Bron’s grill, and challenged his superstar to player harder and better.

To the surprise of some (hint: yours truly), Mike was not immediately fired.

With the Cavaliers in trouble down four points to the lowly Detroit Pistons late in the third quarter, Brown stepped into a timeout huddle and verbally, mentally and without holding back challenged his Most Valuable Player.

The results were a James explosion and yet another victory, this one by a 113-101 score. It was the 10th win in 11 games by the Cavs (53-15) and it got them another banner for the rafters. The Cavs clinched at least a tie for the Central Division title, their second in a row and third in the 40-year history of the franchise.

“We responded [to Brown],” James said. “Having a lot of history with this team and knowing those coaches it becomes a personal but friendly rivalry. You’ve got to understand this is [former Cavs assistant coach and current Pistons head coach] John Kuester we were going against and Mike didn’t want to lose.”

All kidding aside, as Brian Windhorst points out, this was a rather crucial stepping stone in the James-Brown relationship. It’s important for the coach to establish control, even when dealing with one of the biggest stars in the universe.

It may still be the illusion of power and control for Mike Brown, mind you, but even that counts for something.