Mike Brown to Sign 5-Year, $20 Million Deal With the Cavaliers 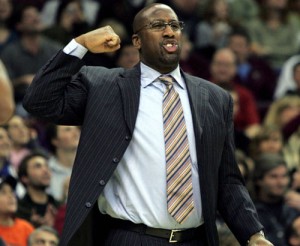 Once the flirtation between Mike Brown and his old employer started up again — shortly after the firing of Byron Scott — things moved very quickly.

And now, Brown is expected to sign a long-term deal ($20 million over 5 years) and return to the Cleveland Cavaliers’ bench.

Per the Akron Beacon Journal and ESPN:

The most successful coach in Cavaliers history is returning just three years after the team fired him. Mike Brown is going home again. Brown and the Cavaliers have reached a handshake agreement on a deal that will return Brown as the Cavs’ coach, a league source said. […] The Los Angeles Times reported Brown’s deal with the Cavs will provide the Lakers some relief (perhaps half) of the roughly $7 million they still owe him. An official announcement of Brown’s hiring in Cleveland was expected Wednesday with an afternoon press conference to follow.

Brown, who coached the Cavs to the playoffs in all five seasons (2005 to 2010), has agreed to a five-year, $20 million deal, sources said. The Cavs have a team option for the fifth year, which is partially guaranteed for Brown.

The Cavaliers fired Mike Brown back in 2010, in a futile attempt to retain LeBron James — they went 272-138 in a five-year span. LBJ says he’s happy for Brown, and that he will be good for Cleveland’s young players.