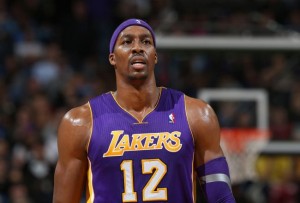 It’s a familiar scene of late: the Los Angeles Lakers are locked in a tight game, and teams smartly begin to foul Dwight Howard, which then derails everything.

Howard missed 8 of 16 attempts from the charity stripe in Houston last night, and the Lakers lost their second in a row (dropping them to 1-5 on the road this season.)

Despite repeated calls from fans and media to take the big fella out when opponents start to Hack-a-Dwight in the fourth quarter, head coach Mike D’Antoni flatly disagrees with the suggestion. Not too surprisingly, so does Howard.

Howard was forced to answer the same questions he had two nights earlier, when the Orlando Magic employed the same tactic in another Lakers loss. Was he expecting to be fouled? How frustrating was it? What’s his take on that strategy? “Everybody’s trying to win,” said a subdued Howard, who made five of 10 free throws in the final minutes and eight of 16 overall.

“If they’re going to intentionally foul Dwight,” Lakers guard Kobe Bryant said, “we have to figure out how to try to use that to our advantage in some way.” Lakers Coach Mike D’Antoni was incredulous when a reporter relayed a question from Lakers fans who wondered why D’Antoni didn’t remove Howard from the game. “Because they have no clue what they’re talking about,” D’Antoni said. “It’s pretty simple. You don’t do that to a guy and he made his foul shots. He’s not the reason that our defense breaks down. He’s not the reason that stuff happens. He’s got to work through this. If you take him out now, then what are you going to do? Are you going to take him out all the time? You’ve got a player who’s going to be your franchise player, you don’t do that to him. And it’s not him that’s causing the problem.”

A bigger concern for the Lakers than Dwight Howard’s clanks from the free-throw line, is their atrocious fourth-quarter defense. They gave up 34 points to the Houston Rockets last night, after letting the Orlando Magic score 40 in the final period on Monday night.

Mike D’Antoni is counting on a healthy Steve Nash to help right this ship. Nash can certainly make his freebies and run the offense, but the team has growing concerns in many other areas.