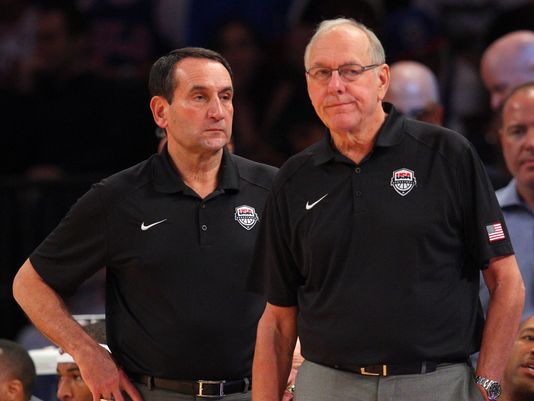 Yahoo! Sports accused Krzyzewski and other college coaches on his staff of using the program as little more than a recruiting tool for the nation’s best high school talent.

Coach K and Jim Boheim (a Team USA assistant) both downplayed the allegations, and claimed that the national hoops program doesn’t help them gain any recruiting advantages. Per Syracuse.com and USA Today:

“The thing that [Adrian] Wojnarowski wrote was completely off-base,” Boeheim said. “The thing I hate about writers is they want to state their case and they use false information. He put in that Mike went to the hospital for publicity. Paul George’s parents took the picture. They put it out there. We had no cameraman. It was his parents. That was unbelievably low.”

“It’s a concern [Kentucky coach John Calipari] has raised before,” Boeheim said of the extra access to top recruits USA Basketball affords coaches. “That particular case he has mentioned. He’s said he thinks it’s an advantage. He got the No. 1 recruit in the country. It’s a little bit disingenuous of him. I like John. We get along fine. He feels Mike is getting an advantage. You could make that argument. But Duke isn’t getting any better players than they ever have.”

“We recruited a lot of really good guys before I coached the United States team,” said Krzyzewski, referencing Grant Hill, Tommy Amaker, Johnny Dawkins and others from Duke’s past. “In fact, a lot of them have their jerseys retired. A lot of them have been national players of the year. I don’t think anybody I’ve recruited since I’ve been the head coach of USA has been national player of the year.” […] “Actually, it’s probably hurt us in recruiting,” he deadpanned. “I’ve got to look into that. Not enough time on the road.”