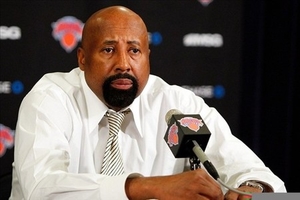 Coming into a season with high, totally unrealistic expectations, Woodson failed to get his team into the postseason, and getting the axe became inevitable.

Jackson was asked about taking over for Woodson during the season by owner James Dolan, but opted for a front-office gig instead, and today the Zen Master made his first major move:

“I have a tremendous amount of respect for Mike Woodson and his entire staff,” Jackson said in a statement. “The coaches and players on this team had an extremely difficult 2013-14 season, and blame should not be put on one individual. But the time has come for change throughout the franchise as we start the journey to assess and build this team for next season and beyond.

“Everyone in this franchise owes a great deal of gratitude to what Mike and his staff have done. We wish him the best.”

Steve Kerr is considered the top candidate for the now vacant coaching position in New York. The Knicks say the search for a new coach will begin immediately.

Mike Woodson guided the Knicks to a 109-79 record in two-plus seasons, including a .580 regular-season winning percentage (the third highest of any coach in franchise history.)

Still, it was no surprise he was let go after finishing with a massively disappointing 37-45 record this year, and missing the Playoffs.