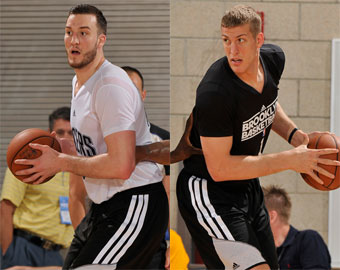 ORLANDO — There is a tremendous history of famous lineage in the NBA. The influence of top college basketball programs is also fairly omnipresent in the League. Then you have Mason and Miles Plumlee, brothers who equally complement and exemplify each phenomenon. The two siblings, from Warsaw, IN, played three seasons together at Duke and were solid contributors to the 2010 Blue Devils team that won the NCAA National Championship. In ’11-12, they were joined by their youngest brother, Marshall, too.

Now, Marshall is preparing for his red-shirt sophomore season in Durham, NC, and Miles and Mason are continuing the school’s legacy of producing high-quality NBA talent. The Indiana Pacers selected Miles with the 26th overall pick in the 2012 NBA Draft. More recently, the Brooklyn Nets made Mason the 22nd overall pick on June 27. This year’s Draft was an experience neither will ever forget.

“It was cool because I didn’t go to New York when I got drafted,” Miles says. “It was cool to be there and see the whole production and see him go up on stage. That kind of the iconic moment, watching him shake David Stern’s hand. Our family had a great time.”

Having his older brother and his entire family with him in the Barclays Center certainly added to the already special night for Mason, too.

“It was a once-in-a-lifetime thing,” Mason says. “I know I wasn’t guaranteed to go in the Lottery, but there was an outside chance. And besides that, it was David Stern’s last Draft, I ended up going to Brooklyn anyway, it just worked out perfectly. I was glad [Miles] was there. I wanted to spend that night with my family so I was glad they all made it.”

With both brothers being selected by teams in the late first round, they were immediately added to winning teams in the League. For Miles, he watched from the sidelines as his Pacers battled the Miami Heat to seven games in the Eastern Conference Finals in June. Mason is now the youngest player on a Nets roster that has a “Championship or bust” mindset.

Miles has already gained a lot from being within a winning culture.

“I’ve learned a lot from just sitting on the bench and watching Roy [Hibbert], David West and really all the guys on our team,” Mile says. “Just the way we play our system, especially defensive-wise.”

The lessons he learned in his rookie year forged his momentum into this crucial offseason.

“I think I have a lot more confidence and that comes from when you’re putting the work in,” he says. “I’ve learned a lot from a lot of great players, I’ve been working really hard and it’s just starting to come together. I’m really excited about this season,”

Mason’s rookie season should be similar to that of his older brother’s. He’s the first-round draft pick of a team that traded for Kevin Garnett and Paul Pierce during the same night his NBA dreams came true. He’s also the last first-round pick Brooklyn will have until 2015.

“I can’t wait, I feel like I’m on the Beatles,” Mason says of his star-studded roster of teammates. “We’ll see what we got. We’ve got all the names that’s for sure.”

But, for two guys who will be undoubtedly be considered key role players during the winter, both Plumlees entered the Orlando Pro Summer League this past week as leaders and focal points of their team’s gameplans.

For Miles, it was basically an audition to fill the role that Tyler Hansbrough has vacated for a gig with the Toronto Raptors. Mason, on the other hand, was warming up to be the backup for a future Hall of Famer.

“I just wanted to really focus on what I’ve been working on, really play within the team, play hard and show people my motor out on the court,” Miles said. “I’ve been working on simple things—my post game, defensively really making more calls and anchoring the defense and protecting the rim.”

Miles didn’t disappoint. He averaged 10.0 points, 9.5 rebounds and 3.0 blocks in 27.0 minutes per game before twisting his ankle that kept him out of the Pacers’ final game against the Utah Jazz. His ankle won’t sideline him much longer and he thinks his performance is just a preview of what he can bring to the court for Indy during ’13-14.

“I just went out there and tried to give it my all,” Miles said. “I’m confident I can step in and fill [Hansbrough’s] role. He’ll be missed; he was a special part of our group. I learned a lot from him and I’m going to try and fill that void as well.”

Mason agrees his brother shined in the Amway Center practice facility and is looking forward to his brother’s hopeful increase in minutes.

“He was blocking everything, man,” Mason said of his brother’s hot start to the week. “He had a good Summer League last year. With his size and athleticism, when he gets on the floor he’s going to make things happen defensively and then go after rebounds. So I expected that out of him.”

Miles is anticipating his little brother’s professional debut, too. He knew Mason would hit the ground running from day one.

“I wasn’t surprised at all. He just played like himself,” the older Plumlee said. “He got to show some things that maybe he didn’t have the chance to in college. That’s the same for a lot of guys that get drafted. At the next level, you have to learn some different skill sets, so I think he did that well and kind of got a taste of what it’s going to be like to play in this League.”

Mason was one of the leaders of a Brooklyn Nets Summer League team that went 0-5 and saw limited positive moments as a team. But their rookie big man was certainly a bright spot in an otherwise cloudy week.

Plumlee averaged 13.2 points, 7.2 rebounds and 2.4 assists in 29.4 minutes per game for the Nets and had one of the highlight plays of the entire week.

“I was expecting to do pretty well,” the rookie said. “I knew guys were going to be looking for me, based on practice. I thought we would do a little bit better as a team, but it was a good week overall.”

But unfortunately, the two were never able to square off based on the new “playoff system” of the league. In fact, the last time they were even on the same basketball court was when they played one-on-one at Duke before last season. It goes without saying that they’re first meeting on an NBA court is something they’re both looking forward to.

“I would have liked to have played him [in Orlando] but it just didn’t work out,” Miles said. “I’m looking forward to when we do meet. It’s gonna be a lot of fun. It’s just basketball, but I’m sure we’ll go at it.” Mason says. “Our first meeting will definitely be physical. That’ll be a game that has a little extra something in that’s for sure.”

The two Plumlees, both standing at least 6-10 and weighing at least 235 pounds, were one of the hottest topics amidst press row in Orlando this week. Considering the Summer League featured more big names than usual, that’s saying some. And as many traditions go in the League, they’ll continue to bring the blue-collar attitude and grit down low to Playoff-contending teams this winter.

Get ready to here the name Plumlee for many years to come.