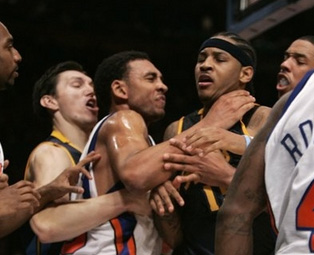 So I had to go to a hoilday party with Wifey tonight, which I’d committed to months ago. This meant not only missing the Falcons/Cowboys game, but also the Knicks/Nuggets and my main man Carmelo Anthony. But I figured that the Nuggets are only in NYC twice a year, so I hopped down to Madison Square Garden for pregame, spoke to Melo for a few minutes (he snuck me into the hallway by the trainer’s room), then I headed out for dinner and the party.

And then about three hours later, my Sidekick started blowing up.

(And before we go any further, I’ll point out that SLAM’s Russ Bengtson, Jake Appleman and our intern Konate Primus all stuck around for the game, so they’ll be filing their first person reports soon enough.)

If like me you missed it (and by all accounts, most of the fans who were at the Garden missed it, too), what happened was the Nuggets had a 20 point lead as the clock was winding down, and JR Smith was on a breakaway layup when Mardy Collins, who looks like he’s about 35 years old, took him out hard with a flagrant foul. JR Smith didn’t like this, and he got in Collins’ face. Then Nate Robinson and JR got involved, and then after they tumbled into the crowd, Carmelo Anthony landed a heckuva hook on Collins. Jared Jeffries then went after Melo and got tackled, landing flat on his face. (And one of the assistant coaches threw a clipboard full of papers all over the place, like confetti.)

There was also a little confrontation between Melo and Isiah Thomas, who later said that he told Melo that he shouldn’t have even been in the game with the Nuggets so far ahead. Point taken, Zeke, but it’s not like Melo was in charge of the substitutions or anything.

“They just wanted to embarrass us,” Knicks guard Nate Robinson told reporters after the game. “It was a slap in the face to us. As a team, as a franchise, we weren’t going to let that happen. A clean, hard foul happened and after that it went down from there.”

Why were the Nuggets playing their starters so late in the game? As former SLAM writer Dan Wetzel notes, maybe it was because Denver coach George Karl, a UNC-4-Life guy, was ticked that Isiah had fired his buddy Larry Brown. Or maybe it’s because the Nuggets only have 5 games over the next 12 days and Karl wanted to get his guys some run. Either way, the starters could have been on the pine.

As we said from day one when the brawl in Detroit went down, if you’re an NBA player, just because you feel disrespected, that doesn’t mean you’re allowed to take matters into your own hands. NBA players are paid exorbitant amounts of money to play basketball and be angels the rest of the time; like it or not, it’s part of the gig. And in this case, a lot of guys failed their exam.

Suspensions will definitely come soon. What should be doled out? Is Isiah right that the Nuggets should have pulled their starters? Should Melo get benched for a while?

What do you think will happen?