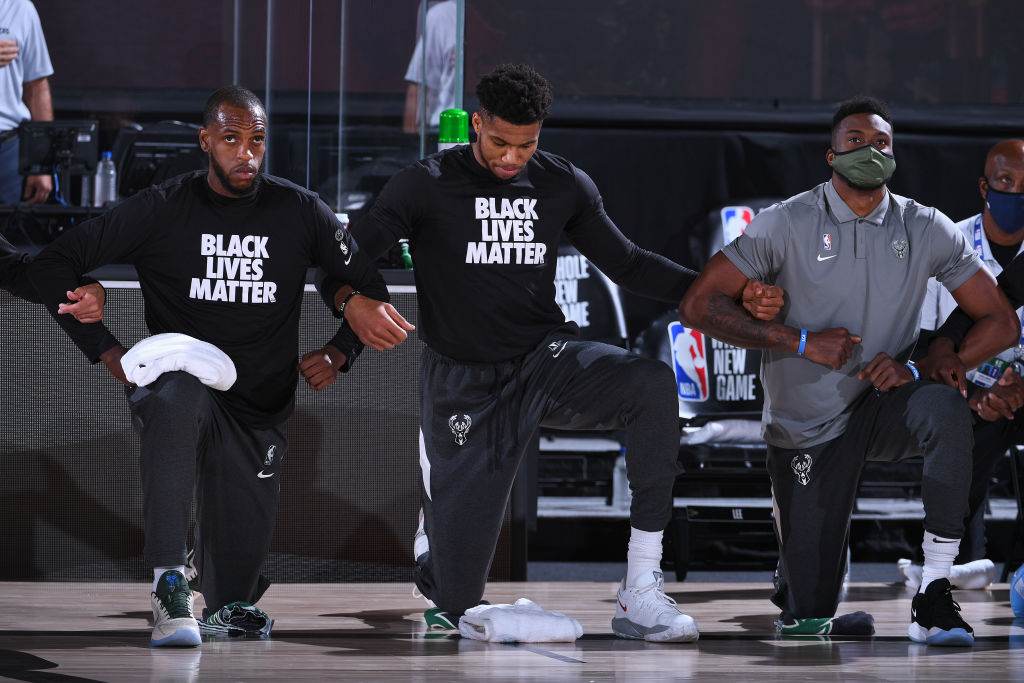 The Milwaukee Bucks sent shockwaves through the professional sports world with their decision to boycott Game 5 of their first-round series against the Orlando Magic. Since the decision, four other teams have elected to follow suit.

The Bucks organization, including franchise superstar Giannis Antetokounmpo, has been vocal in their support of social justice movements worldwide and marched with protesters in June following the death of George Floyd.

“We got to come out here and support,” Antetokounmpo told the crowd, per Blake Schuster of Bleacher Report. “This is not the Bucks … This is the community. We want peace. We want justice. And that’s why we’re out here. That’s what we’re going to do today. That’s why I’m going to march with you guys.“

Antetokounmpo’s own history with racism in his native Greece was well documented in a New York Times feature in 2019.

Milwaukee’s willingness to speak out doesn’t stop and start with their MVP candidate, however. Point guard George Hill spoke of his own struggle to focus on basketball when there are “bigger issues in life to tackle.”

Since that Hill interview in June, the dynamic has changed dramatically in the state of Wisconsin and not for the better. On August 23, 29-year-old Jacob Blake was shot from behind seven times and left paralyzed in nearby Kenosha, Wisconsin, prompting protests in and around the area.

That situation continues to evolve as protesters have collided with police officers and counter-protesters with already fatal consequences.

The underlying issue, of police brutality in America at large, persists and has been the steady theme of most sports-based protests dating back to Colin Kaepernick’s decision to protest police brutality as a then-member of the NFL’s San Francisco 49ers back in 2016.

One Bucks player in particular has had his own publicized incident with police and that January 2018 day has stayed with Sterling Brown ever since. He spoke about it in a must-read Players Tribune article.

“The city of Milwaukee wanted to give me $400,000 to be quiet after cops kneeled on my neck, stood on my ankle, and tased me in a parking lot,” Brown starts, before detailing the altercation that results in a still-pending excessive force lawsuit.

Of course it’s not just members of the Bucks who have sought to use their platform to promote change, the entire NBA has signed on in support of the Black Lives Matter movement, at least so far as allowing pre-approved slogans on player jerseys and specific messaging on courts and team buses.

On this day though, with Milwaukee positioned to close out their first-round series in the 4:00 PM EST tip off slot, all eyes were on the Bucks as they made the ambitious and historically significant decision to boycott. It came, as all major decisions do, steeped in personal history and context.