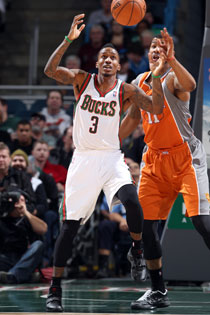 Over the past few years, Coach Scott Skiles has led the Bucks through the highest of highs and the lowest of lows. There were the good times like the epic seven-game series with the Atlanta Hawks during the Feer the Deer era in 2009. There were bad times as well. But as midnight approached on Tuesday, January 8, so did a screeching halt to Skiles’ tenure as the coach of the Milwaukee Bucks.

According to the PR department within the Bucks organization, Skiles and the team mutually agreed to part ways, effective immediately. This is Skiles’ first departure from an NBA team since being fired from the Chicago Bulls on Christmas Eve in 2008.

Allow me to say this: Scott Skiles was not a bad coach. Sure, he has a reputation of rubbing players the wrong way. (See: Jackson, Stephen) He also has built a reputation of having some of the toughest defensive teams in the NBA. After compiling a 162-182 (.471) record with the Bucks, Skiles has notched some big wins, both in the Playoffs and regular-season games. This year’s Bucks, which have had struggles of their own, currently stands as the seventh seed in the Eastern Conference. So what went wrong here?

Milwaukee has been plagued by the inefficiencies of Ersan Ilyasova, the inconsistencies of stars Brandon Jennings and Monta Ellis. That, along with the complete absence of opening-day starter Samuel Dalembert and a host of other roster issues sprinkled in here and there could create a situation difficult for any coach. Skiles was often criticized for his allocation of minutes this season, evoking mumbles from many, including his own player Ilyasova.

In my opinion, Skiles inherited somewhat of a bad situation and it seemed that he may have known that all along. You would just have to take a look at what the Bucks are as a team.

What made this a bad fit was the fact that Skiles, a noted defensive coach, was running a team that wasn’t tailored to his coaching style. Jennings and Ellis would get their points but what was the problem was that it took so many shots for them to get those points. With that said, those points weren’t even as consistent as they should’ve been for two stars with the ability to score at will. Both could give you a great performance offensively, but there were those nights where they both could just play awful offense, defense, or both. Making these two “stars” consistently efficient basketball players is what did Skiles in ultimately.

Ersan Ilyasova received a $32 million contract this past summer has been pedestrian at best this season. Since the beginning of this season, Ersan is averaging 9 points and 5 rebounds and has lost his starting spot while under Skiles. Granted, no one within the Bucks organization could’ve seen this coming but regardless of that, this was one of the nails in the coffin for the Skiles-Bucks partnership.

It was reported by Yahoo’s Adrian Wojnarowski that “Scott hated his team,” according to a “close coaching friend.” That report was later rebuked by Bucks General Manager John Hammond.

“Scott and I did not have a frosty relationship. Scott did not hate this team,” said Hammond.

Body language often told the story in post-game conferences. At the end of the day, Skiles was a coach who really didn’t seem connected with his players. It eventually seemed to spill over in games when certain player would mysteriously not play. For instance, in Milwaukee’s in over the Miami Heat, Sam Dalembert was nowhere to be found. In fact, Dalembert hasn’t played for the Bucks since December 12.

There were other questionable rotation decisions. Reporters don’t know the ins and outs of what goes on in practice or in the locker room, but that didn’t stop anyone from speculating.

John Henson has had some impressive performances early in the season, yet he continued to have his minutes reduced. Tobias Harris, the team’s project player, has been dealing with nagging injuries during the season along with Luc Richard Mbah a Moute, Beno Udrih and Mike Dunleavy Jr. With so many key injuries, it was kind of difficult to see certain players still not get those minutes in their place.

This all comes at a time when Milwaukee seems to be trying to retain its star player in Brandon Jennings. Skiles was the first and only coach who Jennings has played for in the NBA, so that is another side story that will have to play itself out. Under Skiles, Jennings developed into a 17-point, 6-assist per game player.

In the meantime, assistant coach Jim Boylan will lead the Bucks for the rest of the season. At a time with so many great coaching options available, the Bucks find themselves in a position to rebuild with new leadership. The Bucks are currently working out an extension for Hammond.

At the end of the day, this wasn’t the ideal situation for Coach Skiles. Given his reputation as a hot head coach, I don’t know what is. All that we know is that Milwaukee wasn’t the right situation for Skiles, or the Bucks. Nagging injuries, semi-inconsistent stars and what seems to be a lack of confidence are all things that out of a coach’s control, with perhaps an exception to consistency. Scott Skiles was dealt a hand that I doubt even Phil Jackson could’ve succeeded in. It’s kind of ugly in Milwaukee.

Only time will tell how the Bucks’ coaching situation will play out. I wouldn’t expect for Milwaukee to suffer too greatly, this is a Playoff-bound team regardless. Following this season, the Bucks will have an opportunity to start fresh. Hopefully, they will make the most of it.