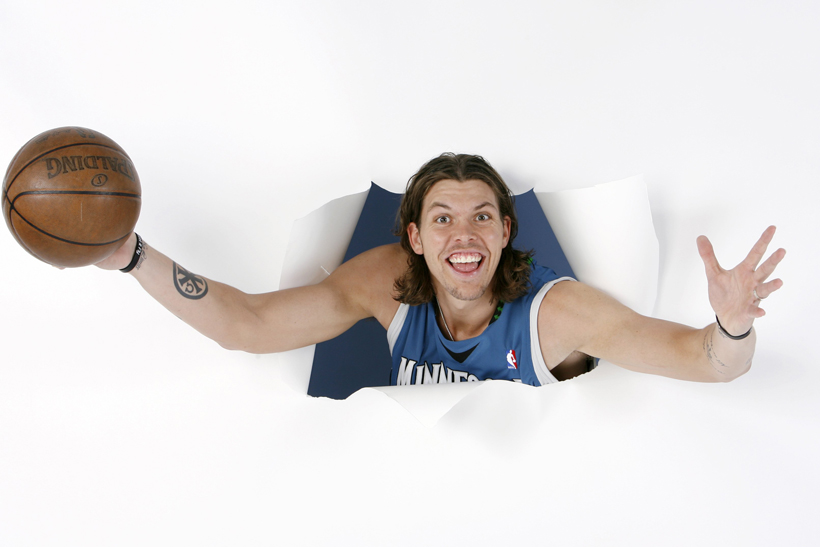 We continue previewing the Northwest Division with the Minnesota Timberwolves. You can read past previews here.

Let’s be honest.  It’s particularly difficult to look excitedly into the immediate future of

a team with relatively high promise without ignoring their realistically low expectations.  The only surprise will be in how far short they fall of the goal.  For this reason chances are many of you won’t be reading much further, but this preview needs to go in the books anyway.

The last chapter of the Twin Cities Tale of Two Kevins ended this June with our working class hero clinching a championship in Boston while his much maligned counterpart sought to repair the broken franchise left behind.  The 2007-08 Minnesota Timberwolves were a hastily assembled hodgepodge of greenhorns, ravaged by injuries and the harsh realities of a loaded Western Conference.  While fans and management alike were willing to suffer through last year’s growing pains and only a scant few envision a playoff push next April, this still must be the year the Wolves turn a page toward better days.

Speaking of better days, for those of you who are still reading and didn’t know, I got a phone call this summer…

“So I’m sitting here one afternoon doing some light reading when I get a call on my cell. Caller ID says ‘Ryan’, so of course I pick up. Im greeted with a familiar voice that says “Hey this is Kevin Love. I heard you don’t want me on the Timberwolves. Heard you thought it was stupid to trade OJ Mayo for me. What’s the matter, you don’t like white basketball players?” Ah, the President of the KLove Media Fan Club giving me more shit. But as always, I was willing to play along and retorted, “It’s not that I don’t like white basketball players, it’s that I dont like white people in general. You and OJ could’ve both been chemists and I’d still think he’s better. Besides, theres too many f*cking white guys on the Wolves already. Madsen, Cardinal, Miller AND you? Are we trying to field a basketball team or cast a f*cking Dockers commercial?” And on and on it went, my denigrating white folks-mostly in jest-and my punching bag willingly absorbing the blows. Thing is, it wasnt Ryan. It actually was Kevin Love. That was kind of embarrassing.”

Thing is, I really did feel that way.  Well, at least about the draft.  With Minneapolis being the unattractive free agent destination it is, I considered OJ Mayo to be the type of exceptional talent that could only be acquired through the lottery.  And as usual I was ready to deplore another draft day gaffe, but Kevin McHale may have actually done something-gulp-right.  By removing the cancerous contracts of Antoine Walker and Marko Jaric the Wolves have a clean bill of health heading into next summer, well under the cap with a healthy core of talent.  Now the task at hand is for that talent to show enough this season to attract that elusive free agent to bring Minnesota toward those better days.

So with that in mind, Kevin Love should operate free of any pressure to be a franchise savior and blend nicely with his new teammates.  His range and vision are welcome additions to a team that boasts three 40% 3PT shooters (Foye, Miller & McCants) and is bereft of interior passing.  (As many ways as Al Jefferson is Love’s superior, that is one area where the rook could teach him a thing or two.)  And as much has been made of Love’s superfluous stature, those extra pounds may help him bang in the paint, where he should be spending most of his time anyway.  But speaking of time and stature, Love is also roughly the same size as most of his frontcourtmates which will almost assure Jefferson more undeserved minutes at center, Craig Smith far less minutes, and Chris Richard another trip to the D-League.

The commitment to smallball was a disastrous-yet necessary-experiment that continually left the Wolves pummeled by opposing postmen last year, but I can’t imagine the Jason Collins experiment lasting that long.  He’s an obstacle-at best-defensively and essentially non-existent on the offensive end.  Love’s skills are too valuable to the offense, no matter his defensive deficiencies, so I expect to see Collins used sparingly and a lot more smallball.  Perhaps this year’s version will be more fluid, with a balance of post and perimeter play, but in order for it to yield any results in the win column they’re going to have to score a lot of points.

In order for that to happen, the point needs to be addressed.  Point guard, that is.  Sebastian Telfair enjoyed a minor resurgence in 07-08, suprising many with his steady hand and leadership, but he still hadn’t rid himself of a shaky jumper which kept him from becoming a true threat at the point.  Conversely, Randy Foye continued to develop his reputation as a slashing sharpshooter, but exhibited an inability to recognize the best scoring opportunity for anyone but himself.  This isn’t to say that he’s a selfish player, but to say that he’s simply not a point guard.  However due to Bassy’s bricklaying, the two will continue to compete for minutes this season, with Foye likely to get the starting nod.  Which is a shame, because in the interest of compensating for both of their shortcomings, it would seem best to play Foye with a dependable passer in Love while surrounding Bassy with shooters like Miller and McCants along with Jefferson.

Nonetheless, this roster is deep enough to experiment and is primarily filled with players willing to make the necessary adjustments.  All too familiar with masonry himself, rookie Corey Brewer struggled mightily with his shot last season, but showed flashes of brilliance in his defensive intensity.  Though reed thin, his long limbs and boundless energy harassed opposing wing players as well as anyone and word is he’s had a productive offseason.  Ryan Gomes pliable skill set and infectious positivity should keep him on the floor to fill holes in the lineup.  Gomes’ knack for making the right play will only be enhanced by the higher basketball IQs surrounding him this year.

Then there’s Rashad McCants, who could be a primary key to team success or a thorn in their collective sides.  I can say with complete confidence that McCants is the best athlete and pure scorer on this team.  He’s capable of getting his shot off from anywhere and is known for finishing strong at the rim.  He can make the defense pay for doubling his teammates in the post or overplaying them on the perimeter.  Unfortunately now that Toine and Marko are gone, I can also say with complete confidence that Rashad is easily the most petulant player on the team.  Frustrated by a perceived lack of respect and denied a consistent spot in the starting lineup, Shaddy is capable of shooting four consecutive times downcourt and pouting at the other end in counterproductive attempts to prove his worth.  He can make things easy on a defense-and hard on his teammates-with his headstrong nature.  If he can put his ego aside and recognize that he can light up any second-team guard in the league, he’ll be heralded for his efforts.  If not, he’s trade bait by January.

I expect the Wolves to make significant strides in the right direction this year.  If I had to put a number on it, I’d say barring any serious injuries, a respectable 37-45 campaign sounds about right.  I know, nothing special at all, but it’s still a 15 game improvement and another lottery pick.  Which hopefully will be enough to maintain team morale, build through the draft and free agency and get me a slightly less confrontational phone call from Kevin Love.