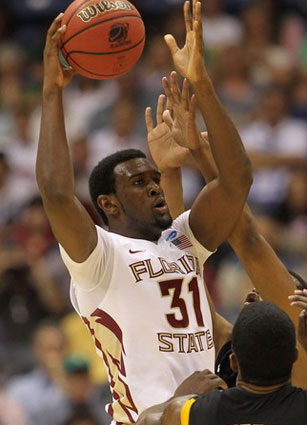 If the Houston Rockets were an NFL team, they would be the New England Patriots. They stockpile draft picks by trading out of their original spot, value versatility down to the last bench player and, for the most part, win by emphasizing the philosophy that team basketball overcomes star power. This is the part where the critics say, “Tell that to the Miami Heat, sucker.” Good point. Unfortunately, not every team can stockpile superstars though, so the Houston Rockets take the players with the biggest hearts. That strategy nearly got us into the Playoffs this year, ultimately leaving us knocking on the door. Next year, my Red Rowdies, we kick the son of a bitch in. (Yes, I paraphrased former Houston Oilers head coach Bum Phillips. I’m originally from H-Town. I’m allowed to.)

As a current Austin, Texas resident, my eyes saw burnt orange when I looked on the SLAMOnline Draft Board and didn’t see either Tristan Thompson or Jordan Hamilton chosen yet. Thompson stepped up big for Texas as a freshman, would be an intriguing prospect for Houston who could soon potentially make Luis Scola expendable, and I was personally crushed when he decided to enter the NBA Draft. Hamilton, meanwhile, was one of the deadliest scorers in college basketball and has the size and talent to play multiple positions. You know Rockets GM Daryl Morey values that. Chuck Hayes has made a living doing it for the Rockets already. That said, neither of these players address the Houston Rockets’ most glaring weakness; team defense. That’s why…

With the 14th pick in the SLAMOnline NBA Mock Draft, the Houston Rockets select…

The new motto for the 2011 Houston Rockets? Putting the lock on the rock.

The Houston Rockets were ranked third in the Association in offense, averaging 105.9 points a game. We need more scoring like Lady Gaga needs another outfit. It’s just flat out unnecessary. If we’re going to make the next step towards being a true title contender, we have to be more like the Dallas Mavericks of 2011 (Ranked in the top eleven in both team offense and defense) and less the like the Dallas Mavericks of…well, every other season they were in existence. Chris Singleton is a player that can get us there.

At 6’9′ and 230 pounds with a 7’1′ wingspan, Chris Singleton has the athleticism and instincts to become one of the best defenders in the NBA. He has the ability to guard the 2 through the 4 and brings the mentality and skills of a defensive stopper at the end of the game come Playoffs time. That’s music to the ears of a team that gave up 103.7 points a game, ranking 22nd in the NBA. The rookie will make an immediate impact. At Florida State, he was the heart and soul of the Seminoles and looked to for offensive contribution. It exhausted him at times on the other end of the court. That won’t be the case in Houston, as the team’s seemingly endless number of scoring options will take pressure off Singleton and allow him to focus more attention on what he does best; stopping the opponent’s best scorer.

There are some challenges offensively for Singleton, who could stand to gain some lower body strength and isn’t exactly prolific at handling the ball. But he will make up for that by crashing the glass and getting the team transition opportunities off of steals and blocks. He will also be an excellent player in a screen and roll situation, which will give players like Kevin Martin more chances to get to the basket. Right now, the Rockets need a counterpart at the 3 to Chase Budinger, who is also a restricted free agent. (Sorry, Terrence Williams. It ain’t happening.) Singleton will be the yin to Budinger’s offensive yang.

For a team that is the best in the Association at helping players find their niche and maximize their potential, Singleton could without a doubt become one of the premier perimeter defenders in all of basketball. Forget Jeff Bridges. It’s Chris Singleton who could bring true grit to the Houston Rockets. Both the Dallas Mavericks and Miami Heat would give the thumbs up to the pick; as the signature trait they share is the ability to tighten up on defense when the game is on the line.

As a mythical member of the organization, I’ve been in Daryl Morey and Kevin McHale’s ears all week telling them that we have spent too much time living on potential and playing for the next day (McHale tried to run away from me once but I stepped on his bad foot. Hell, if it worked for Bill Laimbeer it will work today, and Robert Parrish isn’t around to clock me…I hope.) We want concrete results next season and the best way to do that is to skip out on project players (Sorry, Tristan Thompson) or streaky shooters who lose focus and their defenders on screens (Sayonara, Jordan Hamilton). It’s time to stabilize the boosters on the Rockets. With a single pick of Chris Singleton, the Houston Rockets will be ready for liftoff.