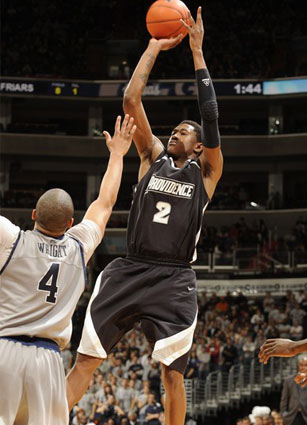 Like I explained when the Bobcats were on the clock with the 9th pick a little more than a week ago, this team’s roster is an eyesore. Usually NBA teams can get a ton done with two of the Draft’s first 20 picks, but it’d take at least four first round picks to fill all of Charlotte’s holes.

The Bobcats took care of their gaping frontcourt void with their pick of Jonas Valanciunas at 9. So if we say that Charlotte’s need for a center has been addressed (for the time being), Michael Jordan’s checklist continues as so: Find a replacement for an aging Stephen Jackson; fill a massive opening at small forward (unless he is of the opinion that Gerald Henderson is a starting SF in this league); select a backup/alternative to the productive but potentially brittle point guard in DJ Augustin; and get some guys who have range beyond 20 feet (only three teams in the League made fewer three-pointers than the ‘Cats last season).

For a very long time (like, up until I started to write this thing yesterday morning), I was thinking point guard with this pick. Contrary to what you might think, though, the reasons for drafting a point guard here would have nothing to do with Augustin’s shortcomings and everything to do with maximizing his strengths.

Augustin is arguably Charlotte’s top returning three-point shooter. As talented as he is as a playmaker, he could be even more valuable (occasionally) as a spot up shooter with a complimentary ball handler creating for him. Right now, that other facilitator doesn’t exist on the Bobcats’ roster. Stephen Jackson is a deft passer, but in his advanced age, no one fears the blow by drive from Captain Jack anymore.

So, of course after all of that, I went in a different direction with this selection …

With the 19th pick of the 2011 SLAMonline Mock Draft, the Charlotte Bobcats select…

Outside Kemba Walker and Jimmer Fredette, Brooks could be the Draft’s best pure scorer. Brooks might be under the radar to many, but a slouch couldn’t score 24.6 ppg and lead the Big East in scoring.

This is one of those, “I hope I kill a few birds with the same stone” picks. In a perfect world, Brooks turns out to be everything the Bobcats need in one convenient package.

Even though the 6-5 Brooks isn’t a point guard, he has solid ball handling skills and quickness for a 2-man, which in college allowed him to routinely beat his defender and reach the paint.

Brooks is also a deceptively long 6-5, at the combine he measured in with a pterodactyl-like 7-1 wingspan. Without saying anything about whether he has the strength or defensive chops to play small forward in the Association and guard the likes of LeBron, Carmelo and Kevin Durant, Brooks absolutely has the reach to potentially be a disruptive, pest defender at the 3-spot.

And finally, Brooks can stretch defenses with a capable three-point shot, something the Bobcats need desperately. Brooks is more of a volume three-point shooter than a Ray Allen-spot up assassin, but at Providence he still managed to shoot a very respectable 34 percent from beyond the college arc. If he maintains that accuracy out to the NBA line, defenses will have to respect that threat, making DJ Augustin much more dangerous.

This pick won’t knock anyone’s socks off, but Brooks seems to offer the best value and combination of skills the Bobcats are dying for. Scoring, ball-handling, shooting, potential small forward … if Brooks can learn to play D half as well as a certain former Cats 3-man hooping in Portland now, MJ might find himself a steal here at 19.