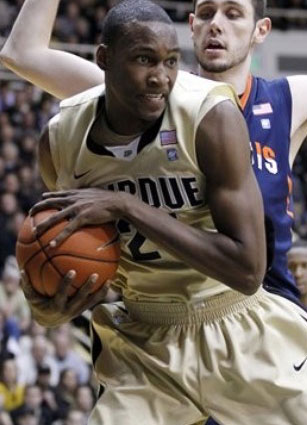 Danny Ainge, the man whose job I am mocking today, offered some insight last week via the team’s official Twitter feed (@celtics) regarding the Draft:

• “We’re as good as the teams playing in the Finals right now. We have a great chance (next season) with our guys right now.”

• “It’s not a strong draft. There are not a lot of players who could change a franchise. We need bigs more than we need smalls.”

Appears that Ainge would consider trading this pick. On the other hand, you wouldn’t think he’d totally trash its value if he were trying to make a deal. Maybe I’m reading too much into these tweets. Let’s keep it simple and assume the C’s stay put (SLAMonline Mock Draft rules don’t allow you to trade, anyway).

Here’s what I’d do to help make the story of the 2012 season—How The Celtics Got Their Ubuntu Back:

The team desperately needs size and athleticism, in that order. Shaq gone. Nenad Krstic gone. Glen Davis… probably gone. That leaves Kevin Garnett and Jermaine O’Neal; an opening night frontcourt with a combined age of 68, combined salary of $27 million, and a combined knee of one-half.

Paul Pierce, Ray Allen, and Rajon Rondo are locked-in and ready to unseat the Mavs. Jeff Green should be back, as should Delonte West.

The number of quality big men in this draft is limited, especially this late in the first round.

Donatas Motiejunas is surprisingly still available in our mock. He’ll still be available after this pick, too. Like the rest of my colleagues, I’m not too interested in a 7-footer who averaged 4.6 rebounds and 0.5 blocks in Europe last season.

Jeremy Tyler fits the bill for size and athleticism, but he’s a project. The Celtics don’t have the luxury of time, which is what Tyler needs. He is not a guy who can contribute to a 2012 contender.

Jordan Williams and Trey Thompkins have solid repertoires in the post, but don’t address the Celtics’ lack of athleticism and aren’t effective enough protecting the paint. In other words, they aren’t intimidating enough to fit the team’s defensive philosophy.

With adequate bigs unable to be acquired here, the Celtics must look at their second most glaring deficiency. Athleticism. They need a mentally strong player who can provide effective perimeter defense, attack the rim in transition, and be prepared to step-up when called on in the postseason.

With the 25th pick of the 2011 SLAMonline Mock Draft, the Boston Celtics select…..

The number one thing I like about Johnson is his size. Standing 6-10 and boasting a 9-foot standing reach, he’s the type of forward who can defend a wide range of positions.

He improved in each of his four seasons at Purdue, as he wisely chose to remain in school after considering each of the past two drafts. The most recent decision to stay certainly paid off, as he ended up a Consensus All-American, Big Ten Player of the Year, and Big Ten Defensive Player of the Year. He also joined the likes of David West, Emeka Okafor, Andrew Bogut, Michael Beasley, Blake Griffin, and Greg Monroe, as winner of the Pete Newell Big Man Award.

The Celtics were by far the worst team in the NBA last season on the offensive glass, averaging only 7.8 per game. Now, that is largely contributed to Doc Rivers preferring his players to get back on defense rather than crash the boards. But when you couple that statistic with their poor ranking in blocks (29th), I think the lack of athleticism becomes more concerning.

In the immediate future, Johnson will give the Celtics an option off the bench who can defend against some of the most challenging players to guard—your LeBrons, Nowitzkis, and Durants. And in the long term, the Celtics might end up with their successor to KG.