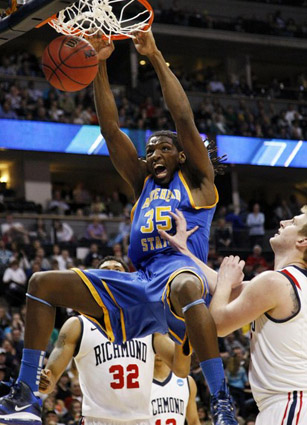 The post-Melo era for the Denver Nuggets saw its ups and down last season. Following Carmelo Anthony’s February 22nd departure to the Knickerbockers, Denver went on to boast a 9-2 record in the first 11 games without their former franchise player. Eventually though, reality hit and things began to look like that of what you would expect from any team that loses its star player. Nonetheless, the Nuggets still managed to finish the season with an 18-7 record following the trade. But once the Playoffs rolled around, the lack of leadership and bono fide star player became clear. Kevin Durant and the Oklahoma City Thunder were able to get rid of the Nuggets in five games.

Despite the disappointing end to the season, there are some positives the Nuggets could take from the 2010-11 campaign. The team, fans, and everyone who follows the NBA saw that this Denver squad ISN’T a rebuilding team. They clearly held their own once Melo went east. And even in the Playoffs, although they were eliminated in five games—with the exception of Game 2—the Nuggets lost the other three games by less than four points.

The roster is definitely Playoff material. The problem is how far into the postseason can this roster get them? How many wins could it produce when it matters the most? Unfortunately, in this League, without a star you won’t get too far.

So what does the roster need?

With the 22th pick of the 2011 SLAMonline Mock Draft, the Denver  Nuggets select…

Basketball fans in the Denver area might know and remember Faried’s game very well. After all, the Pepsi Center was the site where the 6-8 power forward became a fan favorite after his 12-point and 17-rebound performance helped lead Morehead State over Louisville in a stunning upset.

Well, why Faried?… you may ask.

For the many of you that may have never even heard of the Newark, NJ native, allow me to rightly introduce him.

Faried is probably the dark horse of this year’s Draft class. A four-year player out of a relatively small campus in Kentucky, he is best known for the work he puts in on the boards. He’s a flat-out rebounding expert. Faried is also touted for the relentless effort he demonstrates in every second he’s on the floor. That’s huge at the next level. You can work on improving player’s offensive moves and mechanics but you can’t teach heart, effort and desire. You either have it or you don’t.

Back to Faried’s knack for rebounding. As a senior this past collegiate season, he averaged 17.3 points and 14.5 rebounds per game. Those staggering numbers were good enough to make him the country’s leading rebounder in NCAA Division I basketball. In fact, those rebounding figures made Faried the ALL-TIME leading rebounder in NCAA history, surpassing Tim Duncan’s 1,570 rebounds he set at Wake Forest between 1994-97. Faried finished with 1,673 career rebounds.

The two-time Ohio Valley Player of the Year also finished with 86 double-doubles, which is the second-most of all-time behind Duncan’s 87. He reached double figures in the rebounding column of the stat sheet in 31 of 35 games. His 14.5 rebounds per game was the fifth-highest single-season number since 1985. Faried reached the 20 rebounds mark in six games.

The Dennis Rodman comparison has already been thrown out there by many. And if you’ve watched him play, you can see why. In fact, there are reports that Rodman has reached out to Faried over the phone and offered words of wisdom.

The bottom line is that with Denver’s leading rebounder, Nene Hilario, holding the right to opt-out from the final year of his contract this summer, you can’t go wrong by drafting college basketball’s all-time top rebounder. There are all types of rumors out there speculating Nene’s decision and it can be expected for it to fluctuate from now until Draft night. But in drafting Faried, the Nuggets can expect a guy that the League doesn’t see many of nowadays. You know, the type of guy that could care less about scoring, and more about hustling after every loose ball, diving for the ball, and is happy with holding the responsibility of doing the “other things” for the team.

His weakness right now would have to be that offensively his game is limited. But with the help of some NBA trainers and assistants, that can be taken care of and enhanced in a couple of years. Specially when you consider Faried’s work ethic and willingness to get better. And at the end of the day, you just won’t find a rebounder like him in the Draft.

He isn’t a franchise player, but he is the type of player that every franchise wishes they had one of.