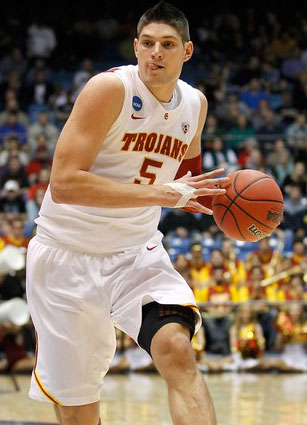 What I like the most about being in the position of making the pick for the Knicks is that so many positions can be filled. Our organization is something like swiss cheese because we have so many holes.

Acquiring Amar’e, Chauncey and Melo allowed us to make huge steps in the direction we wanted to go in. Our intention is to get back to traditional New York basketball. We want to bring back sold out crowds and consistent Playoff appearances. We want to be in the top five in the Eastern Conference and be mentioned as a team with definite championship potential.

The series against Boston this year really exposed what we needed as a team—another post presence. When Amar’e went down, it became very apparent. We don’t want to be known as a “so-so” team, neither do we want to have more of these early Playoff exits.

The millions of basketball fans who attend The Garden

deserve a great team, and that is exactly what we plan on bringing to them. This summer is going to be an interesting one, and I am sure that with this draft pick we are definitely making a great choice.

So with of all of that being said, I present to you, our pick. With the 17th pick in the 2011 SLAMonline Mock Draft, the New York Knicks select Nikola Vucevic from the University of Southern California.

This was not only a smart pick, but an easy one. You ask how? Well, let’s start off with his tremendous upsize.

Vucevic is a legit 7-footer who is very finesse on the offensive end and likes to bang at the same time. His skills are very polished and with his great work ethic, his consistency is beginning to pick up as well.

He put up really solid numbers during his junior campaign at USC. He averaged a little over 17 points per game, shot over 50 percent from the field, as well as 35 percent from three-point land. Add all of that to 7-4 wingspan and you might have a young Dirk Nowitzki in the making.

According to scouting reports, he was one of the most improved players on the west coast this season. Having a solid 4-man who can stretch the defense by knocking down the outside shot is always a check plus for any team.

With a veteran point guard in Billups and Douglas adding speed and scoring to the mix, we believe that Vucevic would be perfect for pick and roll and pick and pop situations. There are many sleepers in this draft but we believe we have the best out of them all. I don’t think I’m saying too much when I say that he probably is the most skilled big man available.