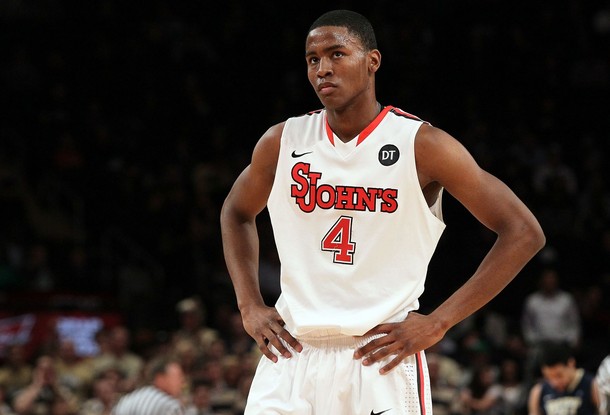 When head coach Steve Lavin publicly refers to you as “The most well-rounded and complete player I’ve coached,” you must be doing something right. Considering that a total of 13 players signed or coached by Lavin—including Baron Davis, Earl Watson and Trevor Ariza, among others—have been drafted to the NBA, that’s a pretty bold statement. Considering the statement was made after only your freshman year, where you contributed to a relatively abysmal 13-19 season, and the remark begins to raise eyebrows, perhaps leaving some a bit dumbfounded.

Maurice Jose “Moe” Harkless is only 19 years old, but after an outstanding freshman campaign at St. John’s University, is about to realize his childhood dream of hearing his name called on Draft night by NBA commissioner David Stern. All this coming a mere two years after the 6-9, 208-pound swingman, despite averaging 27 points, 14 rebounds and 4 assists per game during his senior year at South Kent High School, found himself with only one major scholarship offer in his possession, from St. John’s. The University extended its holy hand and Harkless, without much of a choice, gratefully embraced it.

“Trust me, it was all good,” says Harkless from Sacramento International Airport, the burnout from never ending travel, constant physical activity and superfluous interviews palpable through the telephone. But Harkless is being genuine; it was, in fact, all good. A Queens, NY native getting the opportunity to play in his own backyard for the team he grew up supporting, competing in the toughest conference, and splitting home games between Carnesecca Arena and Madison Square Garden? Things could’ve been worse.

While the Red Storm’s ‘11-‘12 season was filled with adversity—both unforeseen (Lavin’s indefinite leave of absence due to prostate cancer) and self-inflicted (the team was a wretched 6-14 in its final 20 games)—Harkless performed at a high level on a consistent basis, posting 15.5 points, 8.6 rebounds, 1.4 steals and 1.4 blocks per game en route to earning Big East Rookie of the Year honors and leaving his mark on the college landscape.

When the pre-draft period started, several mock drafts had the über-athletic, versatile forward being selected in the late first or early second round, but over the past few weeks his stock has risen considerably. His play during the Chicago NBA Pre-Draft Camp in mid-June was praised by many, prompting several GM’s to extend Harkless an invite for a workout. Orlando, Boston, Cleveland, Philadelphia, Portland, Golden State, Houston, Sacramento… he’s been everywhere. Through the impressive workouts and personal interviews, today, on the eve of the Draft, he could be selected as high as No. 7.

We caught up with Harkless late Monday night, a few hours after his workout with the Kings and a few hours before boarding his red-eye back to New York. We discussed numerous topics, including his preparation and mindset heading into the NBA Draft, the grueling pre-draft process, being a one-and-done prospect, the question marks surrounding his game and much more.

SLAM: What’s up, Moe? What have you been up to since you declared for the Draft?

Moe Harkless: What’s up, man. For the first couple of months, I was in Florida training at the IMG Academy. And recently I’ve just been traveling back and forth to workouts.

SLAM: All the traveling must get tiring… Do you feel yourself getting increasingly fatigued?

MH: Yeah, it’s definitely getting tiring. A lot more tiring than I expected, because there’s no breaks. You’re either working out for a team, or traveling, or working in the gym and trying to get better. But I just had my last workout in Sacramento, so now it’s all about Thursday.

SLAM: What’re you hearing in terms of where you’re going to be selected?

MH: I’m not sure… You’d probably have to talk to my agent about that.

SLAM: Based on all the articles and mock drafts, it seems like you have a wide-open draft range; you could go as high as No. 7 to Golden State, or fall to the mid-20’s. Is it hard to maintain your focus when you don’t have a solid idea of where you’ll go?

MH: Not really. I’ve just been working out wherever I get invited to, and I just hope a team falls in love with me. Whether it’s at No. 7 or No. 29, it doesn’t matter. I know I’m gonna get my name called, I just want a good fit. I don’t really care what number draft pick I am.

SLAM: I usually don’t like asking guys this because everyone is their own, unique self, but if you could, who would you say is your NBA comparison?

MH: Probably a guy like Paul George—an athletic wing who can get to the basket and loves to play defense. People mostly say Paul George, Rudy Gay and Trevor Ariza.

SLAM: Who were some of your favorite players, or guys that you looked up to, when you were growing up?

MH: Growing up, I loved young T-Mac, Shaq, Kobe, Kevin Durant. But my favorite was easily T-Mac; I had the T-Mac 1’s and everything…

SLAM: What is the one aspect of your game that you need to improve the most?

MH: Just getting my body right—gaining weight and getting stronger. I’ve gained 15 pounds of muscle since the season ended, and I’m gonna continue getting bigger.

SLAM: What about your greatest strength?

MH: I would say attacking the basket is my biggest strength. By using my length, I can get around guys and get to the basket. Also, I would say my rebounding is a big strength.

SLAM: That’s what I was about to ask you—Last year, 12 percent of your buckets came off of put-backs. Why do you think you’re so good at getting rebounds, particularly offensively?

MH: I think it’s cause I’m quick off my feet and I can really judge where the ball is going to come off the rim. I’m a lot faster than most big guys and guys my size, so I can easily get around them and go up for a rebound.

SLAM: You weren’t invited to the NBA Draft “green room.” Was that important to you at all?

MH: Nah, not even a little bit.

SLAM: Where are you going to watch the Draft?

MH: I think I might just go, just for the experience.

SLAM: What do you think you need to do in order fulfill your potential?

MH: I need to keep working hard, stay humble, and never get satisfied with myself.

SLAM: Last year at St. John’s, you guys were undermanned, and you were kind of forced to play power forward. What position do you think your most effective at?

MH: I’m a small forward. Last year was tough, but I’m a team-first guy so I didn’t mind playing power forward. But at the next level I’m definitely a small forward. I’ve been working on my defense to guard small forwards, and I’m getting better at it, so I can try to guard guys like LeBron and them.

SLAM: A few of your perceived weaknesses are your “inability” to go left, your poor free throw shooting and your inconsistent jump shot. What’re you doing to improve those aspects of your game?

MH: When I was training, I spent at least two weeks working on just my left hand alone, not even using my right hand for entire workouts. I spent like two weeks doing that. As far as shooting goes, I’ve just been getting as many reps up as possible, and I think my jump shot is a lot better now than it was at the end of the season.

SLAM: Do you think being so young gives you an advantage over some of these other guys, just because you’re coming in with so much room to grow?

MH: Yeah, definitely. Teams see me and they see a lot of potential, so I think that helps.

SLAM: What made you believe you were ready for the NBA after just one year in college? Was your decision to leave school based more off of your stats, or was it a “feel” type of thing?

MH: It was definitely a feel type of thing. My mindset is that I always want to work hard and play against the best players, and I think playing at the next level will help me do that. I think I’m ready for it.

SLAM: As a follow-up to that question, do you think you can stack up with anybody in this Draft?

MH: What do you mean?

SLAM: Like, if they pitted you against Anthony Davis tomorrow, would you be like, ‘OK, I can take him right now.’

SLAM: If there’s one thing that you want to show NBA teams, what is it?

MH: Just that I want to win, and I want to come in and be able to help their program.

SLAM: You had a tough situation last season with coach Lavin not being around much, but you still managed to play very well. How’d you play through all the distractions?

MH: It was tough, but we just had to stay strong as a team, as a group, and fight through it. We were all young, and not having our coach there kind of hurt, but we stayed together and fought through it every game. I wouldn’t have been able to do any of what I did without my teammates, that’s for sure.

SLAM: I want to ask you about three games in particular: Your 16 points and 10 rebounds vs Kentucky, your 30 points and 13 rebounds vs Duke, and your 32 points vs Providence, the all-time record for most points in a Big East debut. Did any, or all, of those three games have any particular significance, or give you some extra confidence going forward?

MH: Yeah, for sure. I think the one I was most excited for was probably my first Big East game against Providence. The Kentucky game was cool, but it was a tough game because we didn’t win. Same with the Duke game. Stats are cool, but it doesn’t matter because we didn’t win. But the Providence game was definitely a great feeling because we were at home, we won, and I found out I broke a record, so that was cool, too.

SLAM: The Charlotte Bobcats recently hired your interim head coach at St. John’s, Mike Dunlap. Talk about him as a coach.

MH: He’s a great coach. He’s probably the most dedicated coach I’ve ever had. He really loves the game; he sleeps and breathes basketball, and I think he’s gonna do great at the next level because he’s real competitive.

SLAM: Do you have any close friends in this Draft?

MH: Uh, not any close-close friends, but I’m cool with most of the guys in the Draft.

SLAM: How was the NBA Draft combine in Chicago?

MH: The Draft Combine was cool. It was a great experience, just getting to talk to every team and being around everyone in the Draft.

SLAM: What would say has been the toughest, or the most intense, workout you participated in? And what about the best one?

MH: The most intense workout was definitely in Cleveland and, um, yeah Cleveland. They made us work. But the best workout I had was probably in Portland. There was a great group of guys there—Kendall Marshall, Tony Wroten, Terrence Ross, Austin Rivers, Mike Scott. It was a great workout, really competitive.

SLAM: Is representing New York important to you?

MH: Absolutely. I always gotta rep where I’m from, man. I try to hold New York on my back wherever I go. There are not that many New York guys in the League, so that just makes me want to represent even more. My hometown and my supporters mean everything to me. Without them, I wouldn’t be here.