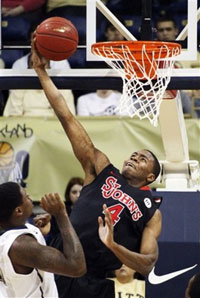 Coming into the offseason, the Boston Celtics need to add three things: youth, energy and athleticism. And with back-to-back picks (21, 22) in Thursday’s NBA Draft, Danny Ainge and Co. will have their first opportunity to do so.

As its roster is currently constructed, Boston’s core has switched from one of overwhelming experience to one of developing young talent. It remains to be seen if Ray Allen and Kevin Garnett will resign with the team, and whether Paul Pierce will still be in Beantown come the trade deadline. Regardless if they stay or go, though, the Big Three are not as imperative to Boston’s future success as they once were.

The only certainty—relatively speaking, of course—is that the team will go forward with Rajon Rondo as its centerpiece. (The Celtics offered Rondo for Russell Westbrook multiple times this past season, and had the same talks with the Hornets, pitching a deal for Chris Paul. And with the Maynor/Harden/Ibaka/ dilemma Sam Presti has on his hands in OKC, those talks could very well be revisited this summer.)

With hopes that third-year guard Avery Bradley can continue to refine his offensive game, developing an outside shot and improving his basketball IQ, knowing when to shoot and when to kick it out to teammates, Boston’s backcourt looks promising.

Rondo and Bradley can’t do everything, though. Collectively, the Celtics aren’t exactly a fountain of youth. Other than Mickael Pietrus—who, well, is merely Mickael Pietrus—Boston is low on wings and will have no athleticism in its second unit, especially if Bradley enters the starting lineup.

If the Celtics can retain Garnett, which is likely given both KG’s dominant play this postseason and the mutual love between himself and the organization, and they can grab at least one ready-to-contribute (in minutes, if nothing else) big man, then Doc Rivers can reduce Garnett’s regular-season usage and conserve his energy for the Playoffs, where he played 36 or more minutes in every series this year. Even if KG does come back, though, Brandon Bass is an unrestricted FA and will likely try to get a deal elsewhere, which means Boston will try to resign restricted FA Greg Stiemsma, who was a shot-blocking machine during his rookie campaign. Couple Stiemsma and Garnett, insert JuJuan Johnson, add another big on Thursday, and Boston’s front-court rotation should be set. But, that’s for pick No. 22.

For now, adding a young, explosive wing player who can run and jump, and has the time to reach his potential while Paul Pierce is still getting buckets on a nightly basis is paramount in Boston’s offseason plans.

With the 21st pick of the 2012 SLAMonline Mock Draft, the Boston Celtics select….

You ever watch Rajon Rondo and kind of feel bad that he doesn’t have anyone who can keep up with him on fast breaks? Someone lengthy with long strides to finish his alley-oops; someone who can get a rebound and run the break himself? Someone—er, anyone—other than Rondo who has the natural ability to finish at the basket?

Yup. That guy is Moe Harkless.

With considerable size (6-9), supreme length and jumping ability, Moe Harkless has all the physical tools that teams covet, and at only 19 years of age is an ocean of untapped potential. Harkless is in the Paul George/Rudy Gay/Kawhi Leonard/Ariza mold—a freakishly athletic wing who can defend the 2 and 3. He is built like a small forward, has a little shooting guard in him, and has traits of a power forward, the position he played on an undermanned St. John’s team this past season.

His strengths are his transition game, rebounding (nearly 9 per game as a freshman, which is crazy considering he was matched against bigger, stronger players on a nightly basis), and a nose for the basketball. Last year, 11.5 percent of Harkless’ buckets came off of put-backs. Harkless is mobile in the open court, which is an attribute that the majority of the Celtics can’t really relate to.

If Boston does in fact choose Harkless, it will most likely marinate him through the system for a season or two, and that’s completely fine. With his talent, physical stature, hard-working attitude and tremendous upside, and with another pick in this year’s Draft to address other needs, Harkless in green and white would be a steal.

That’s if he’s even there, though. Harkless surprised the masses and raised a few eyebrows by declaring for the Draft after his freshman season at St. John’s, but through the workout and interview process, his stock has risen exponentially. Twenty-one is his floor, as he’s in the mix to go as high as No. 7 to Golden State.

Even still, as is the case with most unproven (Moe won Big East ROY, but didn’t do much in the win column; the Red Storm were a wretched 13-19 last year), super-young prospects, there are some question marks. First off, Harkless needs to get stronger. Secondly, he needs to construct an offensive repertoire, improving his jump-shot and developing moves to take his man off the dribble. But the dude is only 19 years old, Boston doesn’t need his contributions right away, and at this point in the Draft, the reward certainly outweighs the risk.

Harkless is a thoroughbred in the open court, reads the passing lanes well on defense, has active hands—forcing deflections and blocking shots—and fills up the box score. If he can refine his offensive skills and match them with his athletic ability (again, it could take a year or two), the Celtics will have hit the lottery on Draft night.