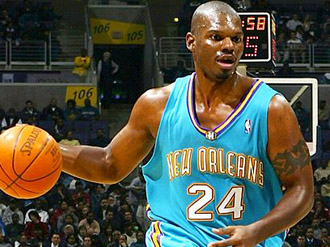 Over a half-decade removed from his playing days, Bronx-bred Jamal Mashburn has kept his NBA fire quenched working as an analyst for ESPN. And it’s a perfect fit for him. Seriously. To have a conversation with the man is to listen to an audio recording of NBA Fastbreak. More recently, he’s has been working hard to promote the flu vaccination as a part of the Faces of Influenza campaign. I spoke with Mash about his philanthropy work, the impending lockout and about which teams might surprise fans this coming season.

SLAM: How’d you get involved with Faces of Influenza?

Jamal Mashburn: Well, my main purpose for being involved in Faces of Influenza is to let people know that they should get vaccinated for the flu every year. I’m a parent of two young kids, a 14-year-old daughter and an 8-year-old son, and it’s important because not a lot of people understand influenza and how deadly it is. It just doesn’t attack elderly people—it attacks young kids-and it’s important to get vaccinated. So that’s why I’m a part of this campaign, not only by name but the substance behind it, because I get vaccinated annually and tell a lot of people around me to do the same. In my playing days, you’d want to be out there on the court as much as possible, so anything that you can prevent from attacking you, be it an illness, which would prevent you from being out there on the basketball court, I was always for it. It’s a campaign not only for kids, but for everybody. When I got here they told me some stories of people who, at 37 years old, 30 years old, very healthy, died from influenza—and I don’t think there’s a lot of people that understand the deadly nature of this illness.

SLAM: Are the stories what made you decide to support the Faces of Influenza campaign? What specifically drove you to support the fight against influenza?

JM: Well, it was the stories, and also, [because] it’s real. It’s something that impacts all of us, and I think there are a lot of myths out there as far as what influenza is. A lot of people kind of [think of it as] a cold, and that’s not what it is. It impacts you on multiple levels. A cold can only be around for a couple of days, and obviously there’s no cure for the cold. But [with] influenza—if you have the flu—you’re gonna be out for four weeks. And it’s a deadly thing.

SLAM: Have you ever seen influenza affect those around you?

JM:Well, we got shots and we got vaccinated accordingly, so we haven’t had the impact of something tragic happening in our family. But when you go to the website, facesofinfluenza.org, you’ll see some of the faces of people who really have been struck by tragedy. I haven’t personally been struck by it, but when you start to see some of these stories, it really touches the heart and pulls on your emotional strings.

SLAM: On a different note, how difficult was the transition from your playing days to broadcasting?

JM: Well for me it was pretty simple. I had played 12 years in the NBA. I was a communication major in college; a lot of people don’t know that. I don’t know why I chose communication, I just happen to think that at some point in life, if you’re gonna get anywhere in life, you’re going to have to have the skill to communicate your ideas and be able to present them—that’s why I chose communication. And I got called by Turner, right before I retired, to come in and do an audition with them and different things like that, and I turned it down. Then I was sitting on a year from the game, and ESPN came calling, and I did a couple of auditions with them, and it went from there. It’s been as easy transition for me; it’s been one that’s been very good—not just for myself, but also my family. I’m very excited about the place that I’m in right now, and joining in a campaign like this (Faces of Influenza), my name’s still out there, but I don’t do things just for name recognition. I do things that have substance and that affect people, and that’s why I’m a part of this campaign.

JM: I have 65 dates a year with ESPN, spread out over the course of eight months, and I don’t win any games and I don’t lose any games (laughs). It makes it a lot easier on the body, and I have the ability to function and be with the family and do different things like that. So it’s interesting; I’m not on a plane that much, but then when I do travel up to ESPN in Bristol, it’s not the most beautiful place in the world—especially in the wintertime, especially living down here in Miami—but it keeps me around the game, keeps me with a voice out there about the game. I always wanted to be on this side of it.

SLAM: Speaking of Miami, Jeff Van Gundy just said the Heat could break the regular season win record. You think they’ll be able to put that good of a season together?

JM:You know what, obviously with LeBron, and Dwyane Wade, and Chris Bosh, and some of the pieces that they put around them such as Mike Miller and Udonis Haslem, they’re going to have a great opportunity to win 70-plus games. I don’t know if it’ll be this coming season—because you do have to give them some time to gel, and some time to be with one another on the court. And I don’t think that’s necessarily for the three great players, it’s more for the role players, because when three great players get together, they have the ability to play off one another and do a lot of different things on the basketball court. You’re talking about three guys who are very versatile.

But I think the one factor that we can’t overlook is health. At the end of the day, if those three guys aren’t healthy, they’re not going to have the chance to a championship or win 70 games, even though anything is possible. So if you run into LeBron James or Dwyane Wade, tell them to get their influenza vaccine, because they need to stay on the basketball court.

SLAM: The other team everyone’s looking at these days is the Celtics. Do you think they’ll be able to hold up?

JM: That’s the interesting question about the Boston Celtics: the age factor. They came within one injury away of winning the NBA championship, and that’s because of Kendrick Perkins’ knee injury. So they have the opportunity, but you never know, over the course of the summer, how age is going to affect a basketball team until they get into training camp. As we both know, you don’t get any younger in the offseason. If Shaq is out there, even though he’s a big guy and has a great legacy and can do a lot of things they were missing as far as rebounding is concerned, how is he gonna be able to hold up? My only concern about having Shaquille on the team is: when you put him out there with Rajon Rondo, who’s a non-shooter from the perimeter, and Shaq in the middle, who can’t really command a double team, how effective are they going to be on the offensive end, as far as moving the basketball? And the other part of it is: Shaq is not a great pick-and-roll defender. That was the basis of the Boston Celtics’ defense.

And I think the other critical factor with the Celtics is [that] they’re losing a great assistant coach in Tom Thibodeau, who went over to the Chicago Bulls. How’s that gonna impact the Boston Celtics? So a lot of question marks, even though they signed Jermaine O’Neal, and good acquisitions with Shaquille O’Neal, but age is still a factor, and health is a factor as well. So I kind of have them below the Orlando Magic. But as far as being one of the toughest teams in the NBA, and being able to grind it out, and who has championship experience, the Celtics are that team.

SLAM: Everybody’s looking at a select few teams right now: the Heat, the Celtics, the Magic are still there, and the Lakers, of course. Who do you see as a team that people aren’t looking at but that you think will surprise some people?

JM:I think it’s time for the Portland Trailblazers to really step up and do something special. I think Brandon Roy was unhealthy last year with his knee, and he’ll be back to play. They have Marcus Camby again. We’ll see what Greg Oden could possibly do. So, to me, with the pieces that they have, I think they have a chance to compete further in the NBA playoffs. But I also like the Chicago Bulls and what they’ve done with adding Carlos Boozer and Kyle Korver. So you’ve got a couple teams, but nobody’s gonna be able to compete against the likes of the Lakers, Miami, Boston, and also the Orlando Magic.

SLAM: Having been in the Player’s Association, and now observing everything from a different view, what are your thoughts on the potential lockout and if the two sides will be able to come to an agreement?

JM:That’s the big unknown right there. I was a player that was involved in the lockout, and that wasn’t pretty at all. It’s a tough situation, when you don’t know if you’re going to play. But you have to prepare yourself to play. The NBA says they’re $400,000,000 dollars in the hole, and different things like that, and who knows what those books look like; I’m not one to judge because I don’t have all of the information in front me. But if I’m a guy representing a player, I would say prepare yourself. It’s just like this program here, with Faces of Influenza. Take the vaccine shot, go to your local health care provider and they’ll give you a lot of information. Just like with NBA players, you gotta prevent certain things. Save your money, and you never know what’s going to happen. But at least you can prepare yourself for a possible lockout. I happen to think there was a lockout looming because of the financial situation, not just in professional sports but the economy in general. They have to get that aligned in real world terms, because customers are not going to play that exorbitant amount for ticket prices, to secure these outstanding salaries for a long period of time. There has to be some wiggle room, and things have to come back to earth a little bit. But we have to keep in mind that it’s still entertainment.