More Injury Woes for the Wizards 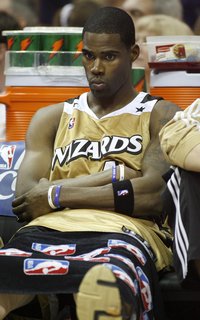 As if having their best and most expensive player in street clothes wasn’t bad enough, now the Wiz must deal with injuries to Antawn Jamison and Brendan Haywood.

Antawn Jamison hurt his right knee (they’re calling it a strain) last night, and he’s set to undergo an MRI today to determine the extent of the damage. According to Antawn, though, there’s nothing to worry about. From the Washington Post:

Jamison on the play: “It gave out on me. I didn’t hear a pop or feel a pop so I didn’t think anything was torn but it just felt like somebody tapped it with a hammer. It was painful but once I calmed down and walked around a little bit, the pain went away.”

For Haywood, the wrist injury appears to be a lot more serious. Depending on what a hand specialist advises today, Washington’s starting center could be out of action for a good chunk of time.

Oh, and did I mention that Nick Young is also nursing a sore left knee and will be out of action for a week and a half?

There’s nothing fun about being a Wizards fan these days.