LeBron James is headed home to Cleveland, but that doesn’t mean the Quicken Loans Arena will be the only venue sporting monster ticket prices on the secondary market this season. As the Cavs are set to flaunt their rebranded team that includes Kevin Love and Mike Miller alongside young star Kyrie Irving, they will elicit impressive prices on the road all season long as well. According to TiqIQ, Cleveland Cavaliers tickets currently have an average road price of $338.39 on the secondary market this season, marking a 252 percent increase from last season’s average of $96.10. Big market cities will see prices jump exponentially when the Cavs come to town this year, including a Christmas Day game against LeBron’s old team in the Heat, which serves as the most expensive road game on the Cavaliers schedule this season. 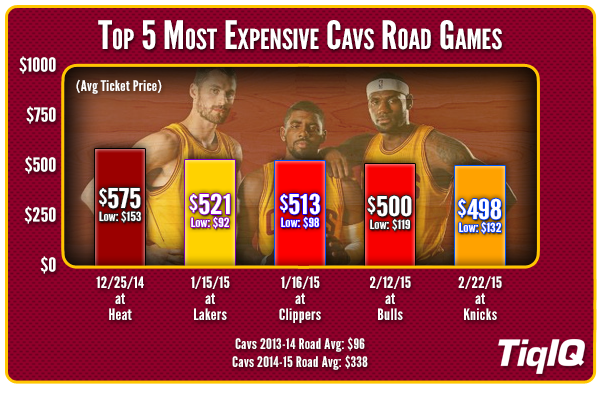 It’s no surprise that a huge premium exists in Miami for LeBron’s return in December. The American Airlines Arena will see its most expensive game of the season on December 25 when the Cavs come to town, and average secondary price for Cavaliers vs Heat tickets to the game is currently $574.59 with a get-in price of $153. Excluding the major loss of LeBron, the Heat have kept their core players in tact over the offseason, with Dwyane Wade, Chris Bosh, Mario Chalmers and Chris Andersen all set to return. They have also picked up Luol Deng from the Cavs, who will need to fill enormous shoes that James has left in South Beach.

Though the Lakers had a forgettable season in 2014, they’ll hope the health of Kobe Bryant will lead them out of the basement of obscurity and back into the main stage. If chemistry hasn’t formed through January, at least the Lakers will see huge ticket prices for their game against the Cavs at the Staples Center on January 15. The average price for Lakers tickets against the Cavs in mid-January is $521.27 on the secondary market with a get-in price of $92. The Lakers went just 27-55 last season, missing the playoffs for the first time since 2005.

The budding Clippers finally realized their potential last season, making a push into the Conference Semifinals and donning a 57-25 record over the regular season. They’ll welcome the Cavs to the Staples Center just one day after the Lakers on January 16. The average secondary price for Clippers tickets to see the team play the Cavs is $512.98 with a get-in price of $98. The Cavs’ stay on the West Coast will certainly elicit big numbers on the secondary ticket market, prompting pricey back-to-back nights in the Staples Center in the middle of January.

Following their bout with the Clippers in January, the Cavs will play their next most expensive road game against the Bulls on February 12. The average price for Cavaliers vs Bulls tickets is $499.77 on the secondary market and a get-in price of $119. Much like Kobe Bryant of the Lakers, Derrick Rose has returned to full health over the offseason and will certainly be eager to play after missing the majority of the last two seasons with multiple leg injuries. He’ll need his health when he takes on LeBron and company at the United Center, whose visit to Chicago will serve as the most expensive home game on the Bulls schedule this season.

Under a new coach in Derek Fisher and a new offensive pattern in the triangle, the Knicks will undoubtedly have to work a few kinks out in the preliminary stages of the season before they hope to excel. They will welcome the Cavs to Madison Square Garden on February 22, where ticket prices will be the most expensive of the season at The World’s Most Famous Arena. The average secondary price for Knicks tickets to their battle against Cleveland is $497.09. Carmelo Anthony has committed to the Knicks long-term, but it will take time for his team to succeed under the guise of new coaching, new players and a foreign offensive technique.

REPORT: Collin Sexton Fails to Reach Extension with Cavs, Will Become RFA in 2022