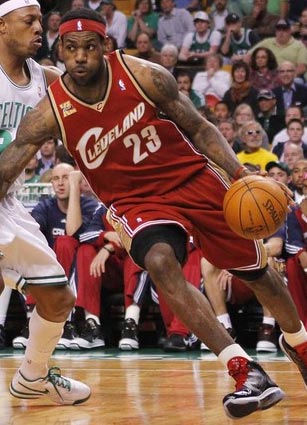 “There was a time when sports were mostly legend; today, they’re mostly marketing opportunities.”

I stole that from Chuck Klosterman. It appears as part of a jacket blurb on the back of a new book by my friend Michael Weinreb. The book is called Bigger Than The Game, and it’s about how a confluence of factors in the mid 1980s changed the very nature of American sports. The book (which is great, and comes out next month; I have an early copy because Mike was in my wedding, but you can and should pre-order it now) is mostly about characters like Bo Jackson, Jim McMahon and Brian Bosworth, but in laying out the premise in the first couple of chapters, Mike also singles out two companies as particularly influential in, and symbolic of, this sea change.

Those companies are Nike and ESPN.

Tonight, the former’s biggest endorsee will go on the latter’s signature network to announce where he will play basketball next season. This is an unprecedented thing, which, for me, seems fitting; I used the word “unprecedented” roughly 173 times in a book I wrote about LeBron seven years ago. The book’s subtitle, as I’ve referenced more than once recently, is “Believe the Hype.”

As I was on my way out of the University of Akron gym on Wednesday, I saw the PR guy LeBron’s team hired a few years ago. I’ve dealt with him professionally a couple of times but don’t otherwise know him. Still, I had to ask. It’s not his job to create or hone LeBron’s image as much as it is to facilitate exposure, but that detail didn’t much matter. I had to ask somebody, and there he was.

He said he did not. He said I was wrong. He did his job, I guess, playing semantics and parsing the phrasing of my question. He emphasized that LeBron isn’t making this decision for anyone but himself and his family (which is totally valid, but misses the point that people are annoyed by the process, not the decision). He pointed to the quarter of a million people who clicked “follow” on LeBron’s Twitter feed in its first 24 hours of existence as proof that his popularity didn’t seem to be an issue. He did most of this as he was walking away from me. It went pretty much how I expected.

For what it’s worth, my sources — yes, I have sources, too — tell me this guy doesn’t even believe what he said to me, which would be to his credit.

I’ll make no attempt to defend the carnival. I have a history of defending LeBron generally, and I’ll continue to do so until he gives me a real reason not to. But in this particular case, I’ll argue only for perspective. The process has been ridiculous and obnoxious and embarrassing, but I can’t and won’t be enraged by it, not when there are real things in the world to be enraged by. I’m more embarrassed for anyone who chooses this guy’s self-serving free agency parade as a subject worthy of actual anger. There’s real, actual bad shit out there to be mad about. There are more worthy targets for your loathing.

Here’s what I think LeBron and his people — the very, very select group doing the shot-calling right now, a group that may number no more than two, or even one — understand:

I think they understand the reality of mass culture. That understanding may be a bit warped, but it’s not unrealistic. Mass culture is by definition stupid, but it moves units. A certain sort of greatness is measured in Twitter followers. Whether you or I think that sort of greatness “matters” is irrelevant.

I think they understand the reality of modern media. That understanding may be flawed, but it’s functional. They’ve got all the juice, and juice is pretty much all that matters. You don’t have to like it or think it’s justified, but you cannot disagree: ESPN is the biggest thing in the world, but they got the announcement only by agreeing to LeBron’s terms.

I think they understand that winning solves everything. They know Kobe. They remember how he was viewed just a few years ago, and they see how he’s viewed now.

I think they understand their direct predecessors. I think they grew up on Jordan, as so many did, and learned from some of his mistakes while elaborating on others.

I think they don’t understand everything. I’m not saying they’re doing this well. I have had moments — and I had a few of them in Akron this week, sitting across the gym from these guys, guys I know, and who know me, physically prevented from even going over to say hello by a phalanx of security and PR — where I wanted to shake these dudes and say, You are fucking this up. They might not see it, because they don’t live in the same world the rest of us do. Or they might agree and not care, because they’re committed to doing this their way, all the way, trusting that history will eventually prove them wise.

Listen, I hate the marketing. I hate Nike and ESPN. I hate Slam for putting him on two covers before he finished high school, and I hate myself for writing a biography that came out before he ever played an NBA game. I’d love it if he took less money to stay in Cleveland and bring in better teammates and declare himself a Cavalier for life and win seven titles in the next 10 years. But none of that is reality. Nike and ESPN are businesses, and so is LeBron, and I bought a lot of diapers and fed my kids a lot of food off that book. People do what they think they need to do. It’s all relative, even if it’s not always right.

I hope they get it right eventually; I hope he gets it right. I’ll try also to remember that, distasteful as it all seems right now, he still hasn’t really gotten it wrong.