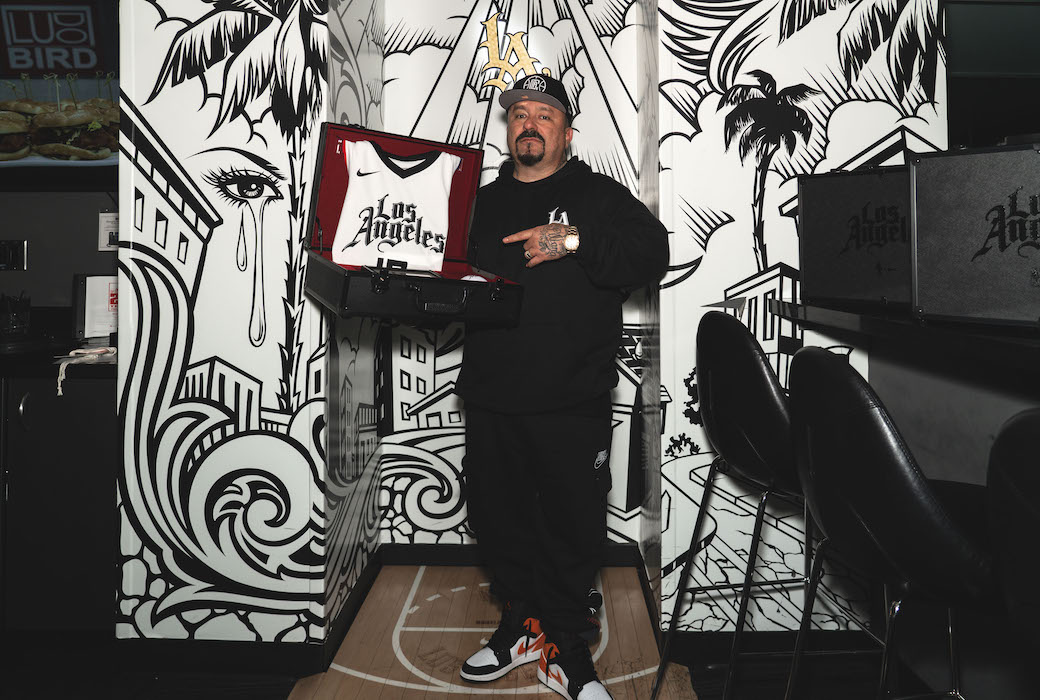 Mr. Cartoon is meticulous when it comes to collaborations. Born Mark Machado, the Los Angeles-based artist has an aesthetic that’s the epitome of LA culture—from graffiti to illustrations to tattoos. Celebrities such as Kobe Bryant, Beyonce and Snoop Dogg and streetwear brands like Nike, Supreme, The Hundred and Vans have commissioned Cartoon for artwork.

The latest Mr. Cartoon-branded collaboration is with the Clippers, who unveiled their City Edition jerseys last Friday against the Rockets at Staples Center. The jerseys, which have a black and white color combo with hints of red and blue, pay homage to Cartoon’s famous designs and the authentic spirit of the city’s street culture, featuring “Los Angeles” in Old English font on the front.

The Clippers will wear their City Edition jerseys 16 more times throughout the season, including the highly-anticipated Christmas Day matchup against the Lakers. There will also be a City Edition Court to accompany the jerseys, displaying Los Angeles geography woven into the court’s design.

During the Clippers’ 122-119 win, we caught up with Cartoon to talk the inspiration behind the design, collabs, LA culture and more.

SLAM: How did this whole concept come to life?

Mr. Cartoon: The concept of bringing street art—an artist that was born and raised here—to a pro team and connecting those two. For me, it’s showing all these youngsters here that they can do that shit. If they see me do it, then they’ll be like, ‘Oh, Cartoon did this then I could do it.’ It starts off with a conversation and then you have another meeting, a meeting about a meeting and then next you know four months go by, and it takes about a year to make it to today. So it’s a year in the process, so it’s us talking to each other and having a conversation on how to make this pop.

SLAM: What’s your process when it comes to working with brands?

MC: I definitely have to be selective and think about a) Do I already support that movement? And if it’s something I can’t [get] behind and talk from my heart then I can’t do it. It’s difficult sometimes because I’m turning away some of those checks, but if they don’t match then they don’t match. For us, we want to do a big collaboration and then we want to do some crazy-ending street shit. … I’ll speak to a group of 24 at-risk students and talk to them about art. All this is pre-thought-out and pre-meditated of how we’re going to approach it. The outcome is always spontaneous and how people feel about it, but it’s been positive all the way through.


SLAM: What does LA culture mean to you?

MC: West Coast culture is different from anywhere in the world. We have summertime all year long. Home of the white tee; the black tee. Some people don’t even own a jacket, you know what I’m saying? With that, we have a head start when it comes to tattooing, car culture, of course West Coast rap, so this was about embodying the street level. The Clippers have done a good job by saying, ‘Hey, we’re not in a private jet, we’re in a ’64 rag on the street with you.’ I dug that whole concept so that was important.

SLAM: The Old English font holds weight and is prestigious. Why do you think that is?

MC: I think some smart guys figured out in the ‘50s and ‘60s that everything that was important was written in this font—the LA Times, your death or wedding certificate—so the homies figured out if I write my neighborhood in that font and put it on the back of a hoodie, it’s got power; if I write it on a wall mural, it’s got power. It’s elevating me and my homies on this level, so I think that people, no matter where they live, it’s neighborhood pride. You can write your neighborhood in that lettering and it looks official.

SLAM: The Clippers have adopted this gritty, blue-collar identity. Overall, how do you identify with that mantra?

MC: I just love the idea that with hard work and persistence and a clear vision on where you want to go, you can achieve what seems to be impossible. Their way is they don’t even own [Staples Center] and they’re the underdogs in here. And I definitely identify with being an underdog even though the youngsters coming up may think I’m on the opposite. We’re still barely chipping away at this state as far as street artists making it mainstream.

SLAM: Are there any other projects you have in the works?

MC: I have a collaboration with Neighborhood from Tokyo coming, which is crazy. Man, I got so much cool stuff I can’t even say it because I don’t want to jinx it before it comes out. I have two pairs of Vans coming out in 2020, too.

SLAM: You’ve done collabs with Nike, Supreme, Vans, the LA Kings and now the Clippers. What’s something else—brand or product—you’d like to be a part of?

MC: I’m definitely pushing towards animation and making my characters. A picture of that teardrop falling to the ground. Picture it moving and have pictures behind it is where I’m pushing myself. Always push yourself into uncharted territory. It seems like you always start from the bottom and always [are] that underdog, but if you’re not the underdog then it’s probably time to check out and get in the wood box. Other than that, you’re always learning, working at perfecting yourself and surrounding yourself with talent. There’s going to be ups and downs and you’re going to fall on your face, but if you love what you do then you’re going to get up because you got to—especially if your family’s relying on you.