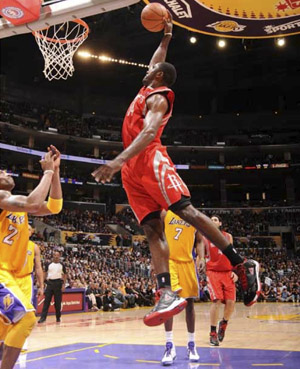 by Patrick Patterson (as told to Chris O’Leary)

My rookie season had its ups and downs. After Summer League I went back to Houston and got my house situated, had a little vacation and started working hard practicing every day, working out. Just adapting to change.

Learning to live by myself has been hard. In high school, I had my parents. In college, I had my teammates as roommates, and now I’m living alone, cleaning, doing something I’ve never done before. I didn’t hire a cleaning lady. I mean, I thought about it, but then they say it’s $100 every time they come and clean, and thinking about it, like, what’s she do? Wash dishes, mop the floors, clean the counters, make up my bed, organize stuff. If I just keep myself neat, I can do it myself and save money.

I was in the D-League for four and a half weeks. I just worked on my game. I was in the gym, constantly working out, every single day. I really couldn’t do much else. I had a car, but I didn’t really know where everything was, so the only thing I did outside of basketball was go to the movies, which was five minutes away and go eat at Subway and shop at Wal-Mart.

When I got back, the first game that I saw minutes was in Oklahoma City (December 15). When they first called my name, I thought Coach said someone else’s name and then my teammate started screaming my name, saying, “Patrick, check in!” You know, it’s crazy when you grow up watching certain NBA players, people you admire and look up to and then you step out on the court against them.

We were in Atlanta on January 15 and I started coughing real bad, had trouble breathing a little bit, and then when I started going up and down on the court, my chest started hurting a little bit and I had a shortness of breath. The trainers recognized it and took me back in the locker room and we went to the hospital. The doctor said I probably caught some kind of bug right before the game and made it worse by being at the arena. It definitely was scary. I didn’t know what was going on. The tests kept coming back that nothing was wrong with me, but I still kept feeling pain in my chest. I was worried for a little bit, because I hadn’t had anything like that happen to me. I was nervous for the most part, and when I started feeling better then I started to go from there.

With the trade deadline, we lost a couple of good players, some great leaders on this team, but after that it provided more opportunities for certain players. I guess Coach’s confidence in me went up, and he’s allowed me to play more minutes. He bumped me up in the rotation and he’s been putting me out there more. I worked my way up and he has confidence in me, faith in me, so I try to do whatever I can to get the win for the team.

And I did end up getting a cleaning lady, because I still have trouble cleaning and washing clothes. I’m not used to all of that. I’ll call her whenever my house gets messy to the point where it needs to be cleaned.