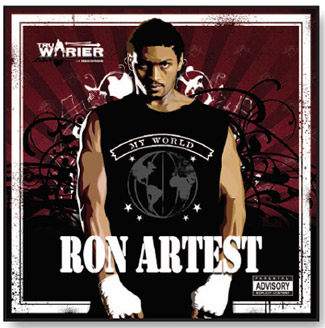 Ron Artest’s new album was delivered to the office a few days ago. Yes, it was Christmas in September. The stance that Ron takes on his musical career is that he wants you to judge him as an artist, not a basketball player that happens to rap. Of course, that is impossible. This is Ron Artest, rapping!

All these rappers want to talk tough, making up stories about crime or even telling the truth about their past every once in a while. Whatever it takes to get people to buy their music. Am I wrong?

Ron is real, perhaps the realest rapper out. His motivation for making this album is, well, you can never be sure of why he does anything. I’d prefer to let his lyrics do the talking.

The first song on the album after the opening skit is called “Haters.” Here are some quotables from that song:

“I admit I used to smoke before games.”

“Hit the liquor store at halftime.”

“David Stern! Damn, David Stern. I gotta teach you bout the ghetto there’s some things you should learn.”

Three minutes into the album. This is f’ng amazing already. Nowadays I’m kind of leery of beef for the sake of beef, but Ron had some stuff to get off his chest, and he does. There’s plenty more on that song. You’ll have to buy the album to experience it yourself. Moving on.

The next song is called “Bad Karma.” Pimp game explained. Groupie stories, check. The much publicized Kirilenko free pass is nothing compared to what Ron’s got going on. This album is already more controversial than Allen “Jewelz” Iverson’s “40 bars.” The next song is called “Working the Pole.” Self-explanatory. And how did this album not make EW’s top 25 most anticipated of the year? Will the Maloof brothers play “Working the Pole” at Kings games? That should be on everybody’s questions about the upcoming NBA season that need to be answered list.

After the initial blast, “My World” turns into a feel-good party album. Then, out of nowhere there’s a skit of Ron hosting a conference at the UN, followed by a concious song called “No Good.” I don’t want to ruin it for you with a bunch of quotes. You need to listen for yourself. My initial reaction when listening to it was “I can’t believe this is happening.”

There’s a song called “Coroner”, the tribute to friends that have passed away or been murdered, and Ron expresses regret that he couldn’t do more for those friends of his to make their lives safer. “Rap Game” covers the shady industry (rap not basektball) with some Phantom of the Opera type organs, there’s some more party songs that approach being R&B, then there’s the mix tape hit from last year “Get Low” with Mike Jones and Nature.

When you get to something called “I Like My Song”, watch out. Yikes. Uh… it’s a fun song.

Now for the quotables towards the end of the album. He gets political saying “I ain’t goin’ nowhere, like blacks running for president.” That’s deep. But the gem of the album is called “Doing My Thang.” It’s inspirational. INSPIRATIONAL!!! “If you work at Mickey D’s for now, you’re doing your thing. / If you ever got suspended from the league a whole year came back puttin up numbers, you’re doin your thing, that’s me, you know I’m talkin about myself.” Oh you think that’s not an exact quote? Listen to the song.

And I guess this is the line we’ve all been waiting for from Ron. “I don’t feel insane, the world is crazy” on the song “Not Easy.”

You need to buy this album. It comes out Halloween. David Stern will try to have it pulled from the shelves before Thanksgiving (Hater). I know Ron wants to be judged as a rapper, not a rapping basketball player, but it needs to be said that this is the greatest album in the history of rapping basketball players. The beats are nothing special, but not painfully bad. I don’t want to use the gangsta scale, cause that’s Omar’s thing. If I were to grade it, I’d give it 4 out of 5. Right now my life is more enriched than yours because I have heard this album and you have not. Catch up.