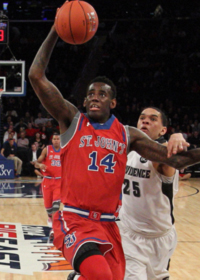 It’s that time of the year and with the NBA Draft “return deadline” having came and passed, there’s no better time to start out NBA Draft coverage. Making the journey back to my hometown of Cleveland, I caught a fellow Clevelander in the gym getting his game right for the next level. Jakarr Sampson recently left St. John’s following his sophomore campaign and appears destined to prove his doubters wrong before June 26 rolls around.

Training with Demetrius Johnson and Karl Jacobson, he was certainly putting in the work to do so. Jacobson, who runs T.A.P.E. Training Systems, started the 21-year-old out with some plyometrics and ball-handling drills. After getting loose with some ladder work, he was put through a myriad of drills focusing on improving hand-eye coordination. From there, he went old school JWill by throwing on the work gloves and going to work on his handle while taking countless blows from Jacobson via MMA pads. He finished things off by doing some explosive band work to showcase his athleticism and improved strength (he has added six pounds of muscle and two inches on his vertical in just two weeks), something that his a point of emphasis throughout the process.

“Definitely my ball handling and my strength,” Sampson said when asked what he is looking to focus on most. “I feel like I’m getting a lot stronger and I’m putting on some good weight.”

Heading over to do skill work with Johnson, it was clear from the jump that the emphasis was going to be placed on shooting on this snowy mid-April day in C-Town. Jakarr, who has had a hitch in his shot throughout his entire career, has always been able to hit jumpers. But his role in St. John’s offense did not necessarily allow him to showcase that. Working with Johnson to clean up the form on his J, we saw even better results and far deeper range shooting the rock.

Going through everything from standstill NBA threes to one-dribble pull-ups to straight line attacks to the rack, we had the opportunity to see much of what Sampson had to offer as a face-up power forward. He’s got a great first step (especially going right) and was automatic raising up off of the bounce from mid-range. Once things extended to the NBA three-point arc, he showed the room for growth that he has down the road. Struggling with his first 25 three-pointers, Jakarr went on to hit 18 of his next 25, including 9-10 from the corners, which most NBA teams feel is the most important spot. While no one is saying that Sampson will be Doug McDermott, he is most definitely going to surprise teams in workouts with his range.

“I just need a lot of reps. I’m just getting in the habit of releasing the ball at the top of my jumpshot,” Sampson admitted. “A lot of reps and a lot of proper repetition will make things come naturally to me.”

While skill work was the main focus of things in Beachwood, that’s not what going to get the Cleveland native drafted. At 6-8, he has the length and freakish athleticism to defend multiple positions at the NBA level. Additionally, he’s got an outstanding motor and can be a straight beast on the glass. It’s the passion that Sampson has for playing D that really has teams excited, though.

“It’s something that I always knew that I could do, but now I’m really loving doing it. I love shutting down a team’s best player and I love guarding guards,” he said with a smile when speaking of his defense. “I know it sounds kind of crazy because nobody likes running around like everybody, but I actually like guarding guards.”

Johnson feels that it’s those same intangibles that will land him on an NBA roster, too.

“His NBA skill is the fact that he is going to outwork a lot of people on both ends of the floor. Grabbing rebounds, doing the little things that will get you on the floor,” exclaimed Demetrius, who knows a thing or two about versatility after leading the nation in triple-doubles as a senior at IPFW. “I didn’t know how athletic he was. It’s different watching it in person as opposed to seeing it on TV.”

Projected by most to be a second-round pick in June, Sampson will have to continue to work at this rate in order to solidify his Draft stock. Drenched in sweat, he made us believe that wouldn’t be a problem.

“I’m a hard worker. I’m going to stay in the gym,” he said. “I”m never going to start getting better. I”m always going to get better.”