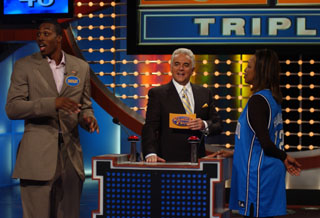 Family Feud, the classic game show that has been a staple of our lives transcending generations, immortalized by RZA “And the survey says You’re Dead!”, will finally embrace the power of the NBA all next week for the first time in its 30-year history. It’s a special sweeps week presentation of NBA Players vs. their mothers. Check your local listings, but it should air once a day every day next week, beginning on November 12th.

The team of NBA players are Grant Hill, Chris Bosh, Dwight Howard, Cuttino Mobley, Richard Jefferson, and David Lee. The feud is with their mothers, respectively Janet Hill, Frieda Bosh, Sheryl Howard, Jackie Mobley, Meekness LeCato and Susan Lee. All Proceeds went to charity, with the mothers choosing Boys & Girls Club of America and the players winnings going to Kaboom! which you may remember from posts like this.

I was fortunate enough to see bits and pieces of the show. I watched very closely. SPOILER ALERT!

Here are some of my favorite moments from the show you can look forward to:

Having not seen Family Feud in a while, I forgot that John O’Hurley is the host. Do these NBA players know they are in the presence of greatness? The legendary Mr. Peterman? Onto the highlights…

Cuttino receives a phone call on his cell during the show, and pulls a Marbury by answering it.

Question: Something a woman wants nearby when she has a long hot bath?

David Lee is as cocky and arrogant on Family Feud as he is selfless and modest on the basketball court. His swag when asked to name something really hairy was off the charts.

Dwight Howard was asked the same question. And he answered “Can you spell hairy? Can you use it in a sentence? Uh.. CUTTINO’S BACK!”

I kid you not, the survey did not say AAAAAAAANNNNNNNGGGGGTTTTTT!!!!

In a basketball-related portion of the show, they question is posed, who is the best B-Ball player of all-time besides the guys in the room. Answers are in no particular order: Jordan, Wilt (on and off the court according to RJ), Magic (by David Lee), Kareem (Cuttino), Bird (Grant Hill)…

Dwight answers in a deep voice “Bill Russell”… and it’s a NO! A buzz! Shock on Dwight’s face. Bosh tries to pick up his teammate by saying James Worthy. Hey, I know they film this show in L.A., but no. RJ gets DR. J, and after a short speech David Lee goes with Jerry West… NO! BUZZ!!! Three strikes.

The moms say “Gervin” not really sure who he is, but Mr. Peterman knows and says The Iceman. BUZZ. The unnamed greatest ever is Shaq! It turns out a random 100 person cross section of America has more respect for him than his peers. When he finds out about this, expect The Diesel to brood in anger, followed by an attempted return to domination.

Remember, all 5 days next week, Family Feud. Whenever it’s on where you live.