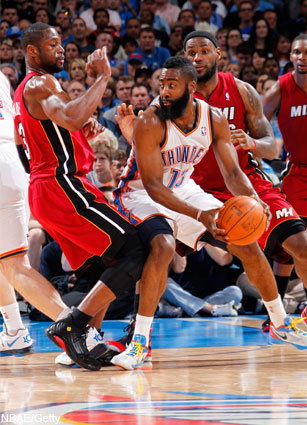 Yo! I’m here at Chesapeake Energy Arena for Game 1 of the NBA Finals, and this place is rocking. Screams on yells on claps on drums, all piled up on top of one another to create this beautiful, only barely controlled chaos. Yeah, it’s pretty loud in here.

Which is no coincidence, because this city is crazy hyped. I walked around downtown Oklahoma City a little this afternoon, and if there was a single human being not wearing a Thunder tee, well, I didn’t see him/her. The area surrounding the arena is a straight madhouse, and as I sit here 30 minutes before tip-off typing this from my seat way up top, the walls are already vibrating from the 3/4 packed house (which will fill up all the way over the next half hour). I can barely hear myself think, which is OK, because all I’m thinking is afsjhsjklfhzfsgfsgdfxkhxjkdfhkjshdfse anyway.

What else is there to say? This should be incredible. I’ll be back in a few for tip-off.

12:00 — Still loud! There’s a Jock Jams-ish tune cranking (or maybe it’s just the actual Jock Jams?), and the entire crowd has an in-sync clap-clap-clap-clap thing going on. Very impressive. There’s also a dude standing on the handrail of a staircase dancing his ass off while disobeying every rule of safety you’ve ever been taught. Alright, tip-off time.

11:16 — First bucket comes on a Shane Battier three, from the exact spot he was practicing pre-game. Kevin Durant follows with a jumper, which means everyone is finally allowed to sit down. Some do, some don’t.

7:50 — There’s a power outlet struggle going down on press row that I promise is much less entertaining than the game. Meanwhile, KD drains a 3 and this place turns upside-down. I have a feeling that might happen so often we’ll never have any idea whether the arena is upside-down or right-side up. 10-8 Miami.

6:22 — 14-8 Miami, timeout. Everyone seems to be getting their footing early, except Shane Battier, who has 2 threes and seems to already have his footing all set.

4:58 — James Harden checks in and draws a roar from the crowd. A slew of fans in here are rocking fake Harden beards, including these two gents.

2:58 — A bucket from Chris Bosh, who checked in a couple minutes ago, makes it 24-14. Bosh’s performance (or, possibly, lack thereof) will be hugely important. You watched that Game 7, right?

2:44 — Heat up 24-15 going into another timeout. Their role players seem more focused, whereas OKC is basically all KD at the moment.

1:28 — They’re playing that Petey Pablo song “Freak-a-Leek” in here! Definitely didn’t have my money on that one.

0:00 — James Harden just went straight Drew League on Mario Chalmers to put in a bucket at the buzzer. Shook him both ways and fired up a jumper that touched all net. 29-22 Miami after one.

11:40 — Second quarter kicks off with a missed Dwyane Wade runner. DWade’s been quiet—seems safe to assume Miami is gonna look to get him going ASAP.

9:48 — Two LeBron freebies make it 35-24. Chesapeake gets quiet for 0.8 seconds before pumping back up to very loud once again.

8:59 — A Serge Ibaka bucket makes it 37-26 Heat. Chalmers gets called for a foul on the and-1, though from the replay it certainly looked like LeBron made the contact. Nice break for MIA, if I saw that correctly.

5:43 — A couple of Derek Fisher baskets and some Russell Westbrook magic and the Thunder are slowly gaining momentum. Miami 41, OKC, 32.

4:55 — Udonis Haslem easily tips in a put-back that infuriates this crowd. Can’t blame ’em, I guess—the Thunder are supposed to be damn good at protecting that hoop. James Harden responds with a trey that infuses excitement right back into the audience.

3:08 — “Guess My Signature” being played during this timeout. 100 bucks if you can correctly figure out which player’s signature is on the big screen. It’s Nick Collison, obviously. The girl got it right, too, so now she gets the cash. Many congrats to her. 47-37 Miami with a few to go before half.

2:45 — “Freak-a-Leek” again! Chris Bosh drains a three, which has kind of been his thing as of late. Serge Ibaka answers with a mid-range J, and Wade answers that with a runner. 52-41.

31.4 — After a nice finish in transition, Russell Westbrook is called for a technical—but so is Shane Battier. Double Ts. Not sure why. 54-47 Heat after the bucket. OKC is teetering on sliding all the way back into this game, but Miami’s been good at keeping them just far enough away and curbing all sorts of momentum.

11:00 — A KD trey and then one Thabo Sefolosha free throw pull the Thunder within 3. People are yelling! LeBron answers with a cold-blooded three. 57-51 Heat.

9:47 — Shane Battier misses a free throw, and now the crowd is ecstatic, presumably because this means the Shane Battier era is officially over.

7:48 — Some back-and-forth sloppy play before Thabo misses a dunk but is sent to the line, where he drains two free throws. This crowd is ready to pop the moment OKC pulls ahead, which seems like it’s going to happen any minute now, and I’m a little nervous because if they get any louder the roof might crack and I’m pretty much right under the roof, so presumably I’m first to go. Woah, speaking of the roof, t-shirts are parachuting from it down onto the crowd. A secret: There’s actually a dude up there (well, here) who’s just throwing them down. Sorry kids, t-shirt magic isn’t real. Miami up 58-57.

7:07 — Just realized everybody in this arena is standing. It’s the middle of the third quarter. Can’t be overstated.

6:26 — 60-60 TIE GAME IT’S SO LOUD oh Wade hits a runner and now the Heat are back up and it’s quieter again. Then LeBron hits another and it’s a little quieter. But now it’s loud again. Literally that was the time it took to get loud again. 64-60 Miami.

3:17 – Another Shane Battier three gives the Heat a 5-point lead, which falls back to 2 after a Kendrick Perkins bucket. That’s followed by a beastly LeBron slam, which he threw down over Perk, who also fouled him. Just mean. Also worth noting: That dunk came after LBJ just hopped right around KD, who simply cannot guard the League’s MVP one-on-one. A timeout gives the Thunder Drummers a chance to shine.

1:34 — “Thunderstruck” playing for the first time tonight, late in the third quarter. Pretty sure the “over” definitely won there.

0:45 — You’re not gonna believe this, but Derek Fisher couldn’t finish in transition while surrounded by younger, wildly athletic superstars. An ensuing Heat turnover leads to a Westbrook and-1, and now OKC has a chance to take the leader. Here we go. Pray for me.

0:00 — He sunk it and the Thunder go into the fourth up 74-73. Right when it fell in, the in-arena announcer said “Let’s see how loud you can get!” which was just cruel for those of us with eardrums to protect. Kidding. Free throw contest during the break.

11:00 — A few fouls slow things down, and then KD taps in an easy one to give OKC a 3-point lead. “Thunderstruck” again!

8:54 — A KD jumper is followed by a Wade and-1, another foul coming from Collison. Tough one—he had good position and a charge might’ve been the right call. Loud boos, as you’d expect. The freebie makes it 80-77 OKC.

7:11 — Miami keeps stuttering while the Thunder are slowly adding points. 84-79.

4:57 — Instead of taking Thabo one-on-one, Bron dishes to Battier who misses a three. Rebound goes over the hoop and out of bounds, OKC ball. Still 89-83. I’d say the crowd smells victory, because it does, but it did even when the Thunder were down 12 points in the first quarter, so you know. But yeah, they’re excited as hell.

4:57 — Timeout. A quick thought: Can we just go best of 11 in these Finals? Would any single person complain about that?

2:44 — Timeout, same score. Miami needs a quick run and a couple of immediate stops to get back into this one. The former is doable, but the latter feels highly unlikely. Durant and Westbrook are just too much right now. On the court, cheerleaders are dancing to Usher, and god are they having a good time doing so. These timeouts are a little long, if you ask me. Kinda momentum sapping.

2:29 — KD draws contact and heads to the line. Cash, cash. See why it’s tough to gain ground against this squad? MVP chants rain down from all angles.

1:54 — A Wade floater is followed by a Westbrook floater. LeBron then drives, is fouled, and finishes. Gorgeous. He connects on the freebie and it’s 97-92 OKC.

0:44 — Timeout, Miami. Needless to say, the Chesapeake Energy Arena is filled with the happiest Thunder fans in the history of happy Thunder fans. People are yelling whatever the Jumbotron tells them to yell, which at the moment is O-K-C.

That’s it. 105-94 is your final score, with the Thunder striking first and going up 1-0 in the Finals. Durant finishes with a strong 36 points, while Westbrook added 27 with 11 assists. LeBron dropped 30, though you can expect the sharks to be after him tomorrow and Thursday and for just about every minute leading up to Game 2’s tip-off.

Thanks for joining me, y’all. Expect a ton of Finals coverage on the site over the next week, and I’ll check in tomorrow afternoon with news and notes from the practices/media sessions. Peace.