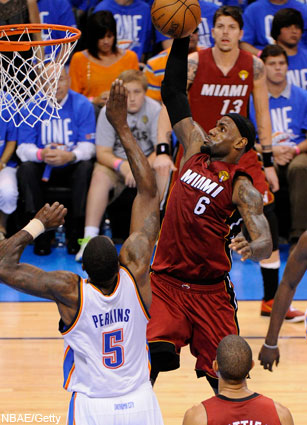 It’s a half hour or so before Game 2’s tip-off, and I’m here on press row in Oklahoma City’s Chesapeake Energy Arena, ready as anything for this tilt to get going. It was sticky-hot today in OKC, which I know a little too well because I just spent a few minutes walking around and taking photos of fans scattered about the area surrounding the arena—we’ll have a gallery up at some point during the next few days—and now I feel like I just played a few minutes of hoops myself.

Speaking of working up a sweat, the most noteworthy pre-game nugget I’ve got is that Dwyane Wade put in a serious workout two hours ago, practicing everything from mid-range jumpers to one-legged runners to free throws way before fans were allowed through the entrance gates. By the time he was through, Wade looked like he needed a breather in the middle of a tough-fought fourth quarter, and the whole situation felt pretty telling—here’s guessing Miami’s shooting guard plans to be much more aggressive tonight as he attempts to give LeBron James a much-needed hand with the scoring load.

Anyway, we’ll officially kick this thing off in a few, once the opening tip is tossed and this rowdy crowd settles down a bit. Uh, kidding—no need to harp on this oft-discussed point any longer, but yeah, they’re loud as hell in here, and in a huge upset, absolutely loving this Wiz Khalifa song. Back soon!

12:00 — I don’t think there’s a group of human beings on the planet capable of clapping in unison to a beat as well as this crowd is. And to hip-hop music! In Oklahoma City! Hands down the biggest upset of the Playoffs. Alright, tip-off time.

11:57 — Maybe the ugliest tip I’ve ever seen. Both guys swatted at the rock like it was a fly circling their heads until one of them batted it out of bounds. Thunder ball.

11:08 — First points of the game come from a Shane Battier 3-pointer. This feels familiar.

9:10 — Kevin Durant gives the Thunder their first points with an elbow jumper. 5-2, Miami.

8:40 — It does look like DWade is trying to get more involved offensively. He’s already drive to the hoop a few times (resulting in either pass-outs or misses), but just got there and finished with a strong dunk.

8:00 — A couple possessions later and Wade is blocked by Ibaka, riling up this crowd even further, as if that was a possibility.

6:58 — Chris Bosh completes a fast break—but bricks the and-1 freebie—to make it 11-2, Miami. Heat coming out strong on offense and OKC is slow to get their offense going, once again. Lot of Game 1 similarities here tonight.

6:36 — Timeout with Heat up 13-2. Vikings running back Adrian Peterson, who gets a nice reaction from the crowd, is in the house and cheering for the Thunder.

5:30 — Another Shane Battier 3. That guy sure is making his mark these days. 16-2, Heat. Crowd a little restless but still making noise, seemingly unaware that this is a pretty terrible start.

2:15 — Nice ball movement leads to a Russell Westbrook lay-up. 25-10 Miami into a timeout. Great start for Miami but leads like that tend to evaporate as quickly as their created in the Playoffs. No reason for Heat fans to celebrate just yet.

1:17 — A James Harden jumper followed by a Miami offensive foul has the crowd riled up once again. 25-12.

0:35 — A Thunder are down 13 and the entire crowd is standing up and clapping. Really bizarre. Then Mike Miller free throws make it 27-12. Still standing.

27-15 after one. Unbelievable play from the Heat, who are doing exactly what they’d like to do on offense and are slowing OKC down on defense as much as they could possibly hope to. And yet, it’s tough not to imagine this lead disappearing after one quick Thunder run—as you know, we’ve kinda seen that happen before—but for the time being Miami’s making things happen in pretty impressive fashion.

Little game of “Who Am I?” during the break, in which a fan has to guess which player is being described given a few clues. It’s Reggie Jackson, and the fan gets it correct, which, well, nice work, lady. Good stuff.

11:14 — There was a song playing during the downtime between quarters that included the lyrics, “Oklahomaaaaaa, Okay!” It was weird. Anyway, Serge Ibaka grabs a strong offensive rebound and gets fouled putting it back up. Two shots: Wet, wet. 29-17 Heat.

10:30 — A Thunder turnover turns into a Norris Cole lay-up, and it does so a lot more easily than you’d imagine. Derek Fisher follows that up with a jumper. 33-19.

9:33 — Kevin Durant returns to the floor after sitting a bit, while James Harden drains a pair of freebies. 33-21 Miami. Everything feels very Tuesday night-ish.

8:19 — Serge Ibaka post move alert! Nice up-and-under for the bucket. Then a Miami turnover is followed by a James Harden lay-in, making it 35-25. Timeout, MIA, who’s up 35-25. Some kind of 70s funk (!) that I should probably be able to place is cranking during this TO.

8:19 — Garland from section 308 is shooting free throws during the timeout so that he can potentially win…something. Not sure what.

6:30 — A DWade bucket followed by a KD jumper. That’s Durant’s third and fourth point, which is crazy. He’s gotta get going.

5:30 — Shane Battier, insanely relevant. He hits another 3 before a timeout, making it 42-29. The crowd boos at a missed goaltending call a couple of possessions back. “Kiss Cam” time.

3:00 — Technical difficulties! A pair of IT guys needed to mess with a router beneath the table on press row right where I’m sitting, so I was relegated to stand awkwardly behind them for a few minutes while they went to work. Anyway, 48-34 Heat with the Thunder unsuccessfully attempting to pick up some light momentum.

2:08 — A Mario Chalmers 3 makes it 51-34 Miami, so OKC calls a 20-second timeout. There’s a Heat radio dude calling this game a few seats from me, and he’s going completely nuts.

And that’s it. Comfortable lead for Miami but we all know how that can be. James Harden leads all scorers with 17, while LeBron has 14. Only 6 for KD.

Tonight’s halftime entertainment: Quick Change! I’m up here with SLAM contributor Tracy Weissenberg and she wants to know how they do this. I have no answer. Help her out…?

11:25 — Kevin Durant comes off a screen and drains a mid-range jumper. Good sign for him. A “crowd meter” thing has the audience here going wild. Bron counters with a drive/lay-up. 57-45 Miami.

10:17 — KD shakes LeBron but runs right into Battier for an offensive foul. On other end, LeBron makes a strong move to the hoop and finishes with another lay-up. 59-46.

5:40 — A Battier 3-pointer leads into an offensive foul by OKC. Timeout with Miami up 70-55. Durant is clearly looking to get going, but isn’t getting many opportunities—the Heat are watching him closely and the Thunder aren’t exactly feeding him. Anyway, t-shirts are raining down from the roof. No big deal.

4:57 — A pair of Kendrick Perkins makes it 70-57. This is right when OKC started to take over momentum and make their run last night, so it’ll be interesting to see if that happens again. So far, no go.

4:19 – Hi SLAM family! Tracy here next to Adam taking over for a quick second!

4:19 – Kevin Durant scored 17 points in the fourth quarter of game 1. If OKC doesn’t get closer by end of third, he may have to have a repeat performance.

3:49 – Heat turnover leads to acrobatic lay in for Durant. Arena is electric.

1:23 – Westbrook scores in the paint after missing a jumper on previous possession.

Westbrook misses a 3 to end the third. Handing the blog back to Adam! If you haven’t checked out a game in OKC yet, I would definitely recommend it. The atmosphere is unlike anywhere else. Send in your Game 2 thoughts!

OK, Adam here again. Heat up 78-67 at the break…had a feeling OKC would make a similar run during the third quarter as they did during Game 1, but Heat stood their ground well. Had an answer for just abut every Thunder bucket, and Oklahoma City’s stars haven’t picked up steam—Westbrook is shooting 6-18 while KD is an efficient but relatively quiet 7-13.

10:20 — After missing a shot, some extra energy leads to Kevin Durant picking up his fifth foul. With 10+ minutes remaining in the game. Eeeeeek.

9:40 — Durant remains on the floor with five fouls.

9:31 — James Harden called for an offensive foul, and the barrage of Thunder fouls has this crowd legitimately pissed.

8:30 — KD finishes a fastbreak with a dunk and this crowd immediately converts negative energy into positive energy. Another one of those unbelievably in-unison clap-chants going on, as Heat maintain an 82-74 lead. And now people are using trampolines to deliver high-flying jams. Always cooler when the mascot is doing it.

8:00 — LeBron misses a runner and Thunder gain possession, then James Harden sneaks right to the hole for a bucket. 82-76 Heat. Here they come.

6:00 — Two Kevin Durant freebies, then a Heat turnover, then a Westbrook and-1. Russ drew contact, flew underneath the hoop, reached back and somehow put in a lay-up despite a ton of contact from LeBron. Wow. Sinks the free throw, too. 85-81 Heat. This crowd smells blood.

5:30 — A clutch DWade floater is followed by another successful Harden dribble-drive. 87-83 Heat.

5:00 — Who is this Shane Battier guy? Another 3. Kevin Durant answers with a 3, and the crowd answers KD’s 3 with LOUD NOISES.

4:30 — LeBron draws contact headed to rack, and the foul leads to a timeout. 90-86, Miami. A cannon is shooting t-shirts into the crowd and it doesn’t really seem to be hyping up anybody more than they were already hyped up, which is fascinating to me. That cannon does serious work in most arenas, but here everybody’s going so wild that it’s impossible to tell if the got more hype, because they were that hype to begin with.

3:24 — Both teams are trading misses. Thunder ball after a LeBron pass is stolen. Same score.

2:05 — The guy calling radio up here is going BONKERS. Both teams trade turnovers, followed by a Russell Westbrook finish on a fastbreak. 94-91. Timeout Miami.

1:47 — I want you know, I said I want you to know babyyyyyy. As if this crowd needs an excuse to shout.

1:47 — A newspaper writer up here just turned to me and said, “This is murder to write.” Must be. Heat ball.

1:11 — Timeout, Miami up 96-91, Thunder ball. Huge possession coming up. Will say this: Heat should’ve tried a little harder to foul out Kevin Durant at some point in the past 10 minutes of action.

0:55 — DWade circles a few defenders, heads to the rim, draws a double-team, then finds Chris Bosh under the hoop for a dunk. 98-91 Heat, and relatively speaking, this crowd is kinda quiet. Some even headed for the doors, which, come on, really? But only a couple of people, definitely not some big trend. It’ll be OKC ball after this timeout.

0:48 — Kevin Durant drives and picks up a quick bucket. Miami gets the ball in but gets caught in its own corner amidst a thick Thunder press, so calls a timeout.

0:07 — KD gets a decent look on the baseline but bricks it, Miami recovers, and LeBron gets fouled. Lot of contact on Durant’s attempt, but refs let ’em play and there was no call made. Now Bron’s headed to the line.

So yeah, that’s all I’ve got. Hell of a game. And to think, just like that, Miami now has control of the series, gaining homecourt advantage and loads of momentum and everything else that they could possibly ask for at this point in time with one huge victory. Game 3 is Sunday night and should be a great one—our man Tzvi Twersky will be liveblogging the madness straight from Miami.

Many thanks for following along, and feel free to hit the comment section with your thoughts on what just took place and some predictions on what we should expect during the remainder of the series.