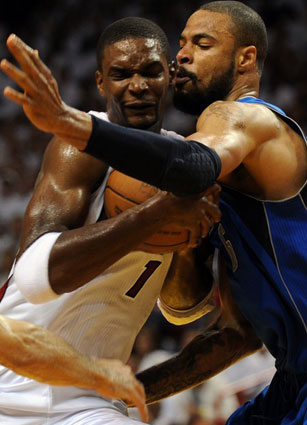 Yo! We’re live at the American Airlines Center in Dallas, getting ready for Game 3. I’m here with Maurice Bobb, who’ll be tweeting this whole shebang at @SLAMonline, and feel free to comment away below.

6:20—Both coaches were pretty relaxed pregame. Rick Carlisle announced that Brendan Haywood is out, and admitted he’ll be forced to use a smaller lineup as a result. Roddy Beaubois has been activated and may get a few minutes. Erik Spoelstra said that stats don’t tell the whole story, and that ultimately the entire game is played on the hardwood. Right. More in a little.

6:36—Miami and Dallas take the court. Some kind of Lil Jon not-so-crunk ripoff playing in the background, with a loud dude demanding that fans put their hands up. Worth noting: Very few hands went up. Erick Dampier immediately bricked a mid-range jumper, then Mike Bibby drilled an open three.

6:49—The JumboTron zoomed in on Dirk Nowitzki, which resulted in a massive cheer, perhaps the night’s biggest so far. In other news, it looks like the Mavericks remade just about every popular song of the past year and turned them into Mavs anthems. Everything from Kanye to Black Eyed Peas to Usher and so forth.

6:57—The starting lineup of the Heat is announced to boos. This Mavs’ intro is crazy! Streamers falling from the sky, er, ceiling, some kind of smoke/firework excitement flying up from the court, and a crowd that is going absolutely bonkers. Did I mention I’m at the NBA Finals, and that the winner of this game takes the series lead and all of the momentum that comes with it? OK. Mentioned.

7:04—Jason Terry is waiving towels and demanding that the arena makes some noise. The game hasn’t even started yet, but he is HYPE. “Run This Town” is blaring, with some boom-boom-stomp assistance from the crowd. Safe to say the American Airlines Center is rocking right now.

7:09—Back and forth early. 7-5 Mavs after two JKidd jumpers. He’s pretty good at those these days. Who’d have predicted that?

7:12—Tyson Chandler absolutely smothers Chris Bosh on a drive, then Deshawn Stephenson hits a three on the opposite end. 14-9 Mavs, timeout. And Bosh is down, rolling on the floor in pain. OK now he’s up.

7:15—Looks like Bosh was only hit in the eye. He should be OK. There’s a set of drummers killing the time during this timeout and they’re absolutely killing it.

7:20—LeBron did that thing where he runs by everyone and dunks it down hard. Crowd quieted for about five seconds, which is a long time given the rowdiness of this bunch.

7:22—Jason Terry checks in. Dude is the definition of a crowd favorite around here.

7:25—Peja bricks a three. The Mavs kinda need him to do the opposite of that. Timeout with Miami up 22-19. They aren’t running all over Dallas, but they’re forcing it inside and scrapping up buckets.

7:32—LeBron with the night’s best dunk so far. Cocked it back and threw it down right over Mahinmi. Yeah, you’re not blocking that one.

7:35—Quarter ends on  Mario Chalmers 40-foot runner…wet. 29-22 Heat after one. Mavs need to be a little more careful with the ball. Also need to protect the paint a little better, but that seems like it’ll be a losing battle as long as LeBron and DWade are set on attacking, which they are.

7:40—For what it’s worth, the Mavs are doing a decent job holding their own downlow, considering the Heat are attacking like it’s their job. Which it is, or at least should be. Hard to protect both inside and out, though, and the result was a Mario Chalmers open three just now. 32-22 Miami.

7:43–Rough call there. Looked from here like Udonis Haslem just lost balanced and fell, but the call went against Ian Mahinmi.

7:45—Lenny Wilkins given Chuck Daly lifetime achievement award. Not sure why they did during this break and not halftime, but the crowd showed Lenny some love.

7:51—Dirk catches Bosh on the fastbreak and swats the ball right back into a Mavs break. A foul, and then a timeout. 38-29 Mavs. A quick Name That Tune game is going down during the break. Maurice is damn good at this.

7:59—Dwyane Wade just stuff JET, took the ball and led a fastbreak by himself. The dunk that capped it off was loud, and the crowd’s reaction was not. 43-31 Miami, timeout. You can feel this crowd ready to pop, but their home team isn’t giving them much reason to do so.

8:01—Yet another Dallas brick leads to a fastbreak. Bron is fouled, gets two freebies. Nets both. 45-31.

8:03—DWade’s got 17 points and LeBron has 10. More importantly, they’re 11-17 from the field. Pretty tough to beat the Heat when those two are converting at that rate. I’d venture to say it’s damn near impossible.

8:06—Terry hits one of two ft’s, then after a Miami turnover, Dirk drains an absurdly wide-open three. Dallas just got the ball back after another Heat turnover. They ain’t dead yet.

8:11—Can’t tell if Miami went cold or the Mavs smartened up. Maybe both. Speaking of smarts, Kidd just got DWade in the air and jumped into him to earn three free throws. Terry is running around screaming “Our house!”

8:13—Kidd’s foot was one the line, so he only gets two shots. One brick, one wet. Halftime buzzer hits at 47-42. Could be much worse for the Mavs, if you ask me. Um, a huge inflatable pepper is floating in my direction. Who controls those things?

8:38—OK, back. Terrell Owens sighting at halftime. Mavs came out slow in the second half, giving up a couple buckets and falling behind 53-42. Barea just checked in, and this definitely feels like the ideal Barea time. Let’s see if he can spark them a little.

8:43—Loose-ball foul on DWade. That’s three on Wade, Bosh and Bibby (just picked up his third). Mavs making some needed stops but not converting on offensive end. Also, this crowd feels kinda restless, like it’s ready to explode if it gets a single reason to. Miami does not want the Mavs to get back into this.

8:45—Andddd there it is. JKidd sinks a three, cuts the lead to seven, Miami calls a TO, and the crowd goes bonkers. Bonkers.

8:47—Stadium announcer demands that all Mavs fans get on their feet and make some noise. And all the Mavs fans are on their feet, and all of them are making some noise. Big chance for Dallas to keep chopping up the Miami lead here.

8:52—This is true home-court advantage. LeBron, visibly frustrated, picks up his second foul, but more importantly, picks up his team’s fifth. Dirk gets two free throws. Drills both.

8:54—A gorgeous JKidd through-pass leads to a Marion dunk. Remember what I said Miami doesn’t want to happen? That happened. I can’t even hear the voices in my head yelling “Ohhhh!” after every amazing play.

9:02—Juwan Howard fouled utilizing one of those old-dude-at-the-rec-center moves. Hits one of two. 65-62 Miami.

9:05—67-64 after three. As Maurice just pointed out to me, it really doesn’t feel like such a close game. With the exception of those few Dallas runs, the Heat have pretty much run shit. In other news, this dude in a basketball costume is about to dunk using a trampoline. Eh? I could do that.

9:10—LeBron turns a steal into a dunk to start the third. That’s followed by a prolonged stoppage, something to do with a wet spot, or multiple wet spots, on the corner of the court. Also: Scottie Pippen’s here. He thinks I’m the greatest sports writer of all time.

9:14—A Dirk trey ties it at 70. Crowd going nuts. Just a reminder, Maurice is still tweeting away at @SLAMonline. Follow along there too.

9:17—74-72, Heat. Mavs ball. Timeout. Getting to the point where every possession has the crowd on the edge of its seat.

9:27—Monster putback from Tyson Chandler. The two squads traded buckets after that, with Miami up 81-76 and the ball now. Double-dribble on Bron Bron. Turnover.

9:32—Dirk Nowitzki named Player of the Game. Not sure by who, but that’s what it says on the screen. He’s got 26 points and 8 boards. Looks like Dallas will play Dirk-Terry-Kidd-Chandler-Marion, while Miami is putting Chalmers-Bosh-Wade-James-Joel Anthony on the floor.

9:39—Mavs counter with a Nowitzki jumper. “Dirk is serious right now”—Maurice Bobb. True story. 24-second violation on the other end. Dallas ball. 86 all.

9:41—Dallas can’t convert with the ball, and eventually lose it out of bounds. Miami ball, tied at 86. A fan’s sign displayed on the screen says “NOT In Our House.” The screen also has a gorilla in a Mavs jersey pounding his chest. Cheers of “de-fense” coming down.

9:44–Dirk tries to pass out of a double-team, but the ball goes out. Miami gets a chance to put game out of reach, but LeBron’s three doesn’t fall, and Dirk snatches up the board. Mavs ball, 4.4 seconds to go. 88-86 Miami. What’s the move here?

9:47—Dirk gets the look, but it’s all back rim. Game. The energy was just sucked out of this place like a popped balloon. Final score: Miami 88, Dallas 86. Will update with some post-game commentary later.

—Dirk walked into the media room looking a little annoyed, as is usually the case after a heartbreaking loss. Immediately upon entering, he muttered, “It stinks in here” under his breath. I laughed. It really did.

—A reporter accused LeBron of shrinking during the recent games’ fourth quarters. He responded: “I think you’re concentrating on one side of the floor. All you’re looking at is the stat sheet. Honestly, I’m a two-way player. Since DWade had it going offensively, so we allow him to handle the ball, bring it on offensively. You should watch the film again and see what I did defensively. You’ll ask me a better question tomorrow.” Sonned.

—Both JKidd and Coach Carlisle were quiet, upset and relatively confident that things will change for the better moving forward. The biggest point the two of them made—without actually making it—is that Dirk is gonna need more help down the stretch. That’ll start with Kidd, but should trickle down to everyone who’s on the floor in the final five minutes of any future contests.

—Chris Bosh was reeling from the poked eye he suffered during the game. He looked annoyed, and, simply put, did not want to be in that room answering questions at that time. His eye was both red and swollen, and it’ll be interesting to see how it’s doing 12 hours from now. Either way, as he noted, he won’t be missing any time because of it.

And that’s all. Both Maurice and I will be at the practices tomorrow, and he’ll be providing a short write-up on those happenings at some point in the afternoon. Anyway, I’m tired. Peace out.