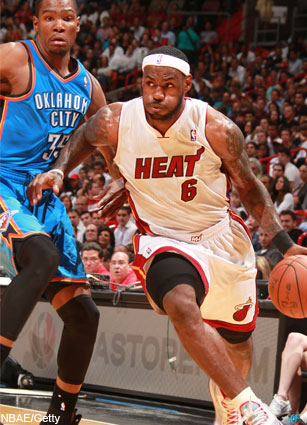 Welcome to Miami, home of humidity, the Heat, and Game 3 of the 2012 NBA Finals.

It’s not hard to believe we’re back here for the 2012 Finals, though. Yeah, there were moments of doubt over the course of the postseason—especially in the Eastern Conference Finals, when Boston had two chances to knock the Heat out. Overall, though, overall the dynamic play of LeBron James, erratic brilliance of Dwyane Wade, and mended abdominals of Chris Bosh made Miami the favorites to come out of the East all along.

The Oklahoma City Thunder is somewhat of a less obvious Finals participant than the Heat. They had a tougher path to get here—having to go through the Mavericks, L.A. Lakers and San Antonio Spurs—and lacked the hype—though not the talent—of some of the other teams out West.

They’re here in the Finals, though, and just because they weren’t the obvious team to emerge from the West doesn’t mean they aren’t dangerous. In the first two games—which took place in Oklahoma City thanks to their home-court advantage—despite only achieving a 1-1 split, OKC gave Miami everything they could handle. First quarters aside (which Miami won, 29-22 and 27-15), OKC was not outscored in any other quarter in either game. More than that, they were +17 on the Heat in the two fourth quarters combined. Between Kevin Durant, Russ Westbrook and James Harden (not to mention the Serge Ibaka and the bench), the Thunder has shown they have more than enough firepower.

All of that—the first quarters, the fourth quarters, LeBron’s play, KD’s play—is in the past, though. It’s last week’s news, washed away by a plane ride and an extended weekend of practice. As Coach Spoelstra said yesterday, “Today starts the bunker mentality… We know how this works in the Playoffs. They’ve had two days probably to get beat up, and people have come up with whatever storyline and motivation for them.”

It’s not easy to predict how the shift in scenery will impact the series. It is easy to predict, though, that tonight’s game in Miami should be every bit as exciting as the first two in OKC.

Welcome to Miami, home of heat, the next three Finals games, and, potentially, the 2012 NBA Champions.

7:59 PM: Player intros: Both teams come out to Kanye West. And now, immediately after intros, “Moment for Life,” an older Nicki Minaj song is blaring. Way too many fans know the lyrics and are singing along.

8:04 PM: SLAM’s media seat is located right near an in-arena bar/grill/restaurant, so I’m pretty much typing in the dark here. Apologize in advance for any typos.

8:05 PM: As I noted when I arrived at the arena four hours ago, here are the t-shirts they left for fans sitting in the lower bowl.

8:06 PM: Funny pre-game locker room note. Some young reporter asked Russ Westbrook if he would answer questions. Russ told him to look at the clock. It said 76 minutes until game time. Russ said I speak at 75 minutes. The guy said, “So that’s another minute?” Russ said yes, and then laughed. He answered first question at exactly 75 minute mark.

8:07 PM: We have basketball! Chris Bosh misses the game’s first shot; Thabo Sefolsha misses the second. And then Bosh makes the first on an easy dunk. (And then Thabo scores OKC’s first.) All tied at 2.

8:10 PM: Three dunks already so far in this game (Bosh, Perkins, Wade). Crowd is actually pretty loud. Louder than I ever recall them being in the deciding Game 6 of last year’s Finals.

8:13 PM: Wow, another slow start for OKC, as they trail 10-4 and are forced to call timeout. This is not what they were hoping for, especially after struggling to start Games 1 and 2.

8:15 PM: The Viper, Pete Vecsey, is sitting two seats over from me. Can’t wait to hear his running commentary on this game.

8:17 PM: Kendrick Perkins, a personal favorite of mine, already has four points. That matches his totals from both Game 1 and 2.

8:23 PM: Welp, internet here just got wonky, and I ended up losing my last three notes. Bottom line: Thunder have played well since their early timeout. Still trail by two, 16-14.

8:24 PM: Worth noting that Kevin Durant was off on pull-up threes when he was warming up a few hours back. At one point he missed five in a row from the shoulder. Yelled at himself after each miss.

8:26 PM: LeBron is punishing OKC in the post. Really putting in work down there. Something he started doing more of this season. And something he’s really started doing ever since Chris Bosh’s ECSF injury.

8:28 PM: If the noise in OKC was deafening, here it’s just annoying. I mean, the fan noise is GREAT…but there’s a drum that’s being banged incessantly about 20 feet from press row.

8:32 PM: James Harden is one of my favorite players in the NBA. I just wish he didn’t feel the need to exaggerate every time a defender makes contact with him. I know you’re stronger than that, James!

8:39 PM: LeBron James takes a seat for the first time tonight. He has 12 points and 5 rebounds.

8:44 PM: Dunno if edict comes from coach or not, but Thunder pgs are putting pressure on the ball as soon as Miami inbounds it.

8:53 PM: After that turnover, which led to a Dwyane Wade fastbreak layup, Kevin Durant punched himself in the thigh.

8:54 PM: Diddy’s “Coming Home,” off of 2010’s Last Train To Paris, getting some air time, complete with an accompanying video montage.

9:04 PM: Dance-off between the AARP dance team and the actual dancers at the timeout. Dunno who comes up with this stuff.

9:06 PM: Battier, the media-proclaimed smart one, has reverted to the mean tonight. Zero points so far.

9:42 PM: Pit Bull on the loudspeaker. Not surprised, especially after seeing him at All-Star.

9:48 PM: Anytime I even think something semi-negative about Derek Fisher, he makes something happen. Uncanny.

9:49 PM: Still plenty of time to turn it around, but Serge Ibaka’s had somewhat of a disappointing Finals up to this point.

9:51 PM: For the record, Joey Crawford has been behind a lot of these calls.

9:55 PM: Eight points and 11 rebounds for Perkins. He leads the Thunder in minutes played thus far.

9:59 PM: The game’s missing something with KD on the bench. Doesn’t have the same buzz. And the fact that OKC still leads by five (67-62) with Durant on the bench should scare Miami.

10:03 PM: Props to the fans for getting loud tonight. Pretty great atmosphere here.

10:09 PM: Fun fact from my friend, Dan: That was the first quarter this series, other than all three first quarters, that Miami outscored OKC.

10:10 PM: James Jones for three. It’s been a minute since he’s made a trademark trey.

10:14 PM: Heat lead, 74-73, after a lengthy pine-ride by the foul-plague Kevin Durant. With a little less than nine minutes left, everything’s on the line.

10:15 PM: Yeah, I’m pretty sure Cole Aldrich was bopping his head to the music during that TO.

10:22 PM: Getting a little chippy out there as the clock ticks towards zero. With six minutes to go, Miami leads by one. (For the record, and for comparison, the Heat are 24/27 from the line. That’s 89 percent.)

10:35 PM: LeBron James making tonight count. He’s gonna have no regrets, as he said he wouldn’t before Game 1.

10:36 PM: Two big FTs from Kendrick Perkins. They’ve been looking for a third contributor tonight, and, by default, he’s been it. He has 10.

10:42 PM: Harden’s rep as flopper hurts in situations like that. Not gonna get benefit of doubt.

10:44 PM: Miami has hit 14 more fts than OKC. That’s obviously a major factor in this four-point lead with 16 ticks left to play.