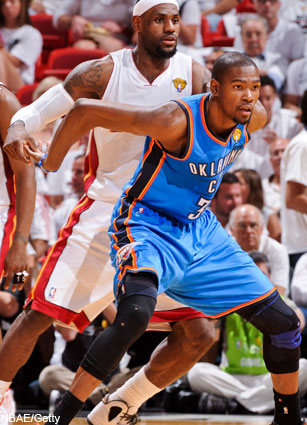 As I type this, there’s still five hours until Game 4 is set to get underway, and I’m sitting here at American Airlines Arena (AAA) getting ready for all of tonight’s action.

The players aren’t in the building right now—only suckers like me, and some hardworking folks, are—but since Game 3 the stars of the show have spent more than their fair share of time on this corner of Biscayne.

First, early yesterday afternoon, both teams, at separate times, were present at AAA for practice and media availability. That lasted a few hours, during which time at least one or two or three noteworthy things were said.

This morning, roughly 36 hours after Game 3 came to a conclusion, the players filed back onto the court for a lil shootaround. At this point in the season the players certainly don’t need the extra practice, and at this point in the series members of the media certainly don’t need the extra access—but routine is routine, and no one wants to alter their habits during these crucial days.

So shots were up put up (Kevin Durant hits just about every jumper he takes, as you could imagine), stairs were run (Eric Maynor, who’s recovering from a torn ACL, and a slew of others worked their way around the entirety of the arena), and, of course, a few more semi-noteworthy things were said.

It’s five hours until tip now, though, and players are probably in their hotel rooms and houses right now, in the final stages of their pre-game meals, naps and accessorizing before they make their way back to AAA.

Their past two trips to this arena have been pressure-free and, maybe, even cathartic. Tonight, though, with the fans back in the orange-and-red seats and 48 minutes on the clock, it’s back to Finals reality for the Miami Heat and Oklahoma City Thunder.

8:51 PM: About fifteen minutes ago Rick Carlisle the NBA Coaches Association presented Pat Riley with the Chuck Daly lifetime achievement award. After Carlisle’s intro, Riley took to the dais and made his own remarks. In case anyone had forgotten, during a 10 or so minute session, Riley reminded them of his oratory skills. He absolutely killed the Q+A session. He didn’t say too much that’s worth sharing right now, except that he doesn’t miss coaching at all (and he said that he and Coach Spo don’t meet, they collaborate).

8:59 PM: Could just be my section but I actually think that Shane Battier (and Dwyane Wade) got the loudest applause when introduced.

9:02 PM: Final pre-game note. Not much was said at either coach’s presser before the game. But when Coach Spo was asked about how the player’s deal with all the off-court distractions they’ve been dealing with, he answered: “Well, the reality is that this is our family away from our families…So things on on the outside, they always know that this is a place that they can come to that’s safe, that’s a safe haven for all of our players. We’ve built up a nice community here.”

9:08 PM: Somewhat of a sloppy start to the game. Nerves, jitters, whatever cause may be.

9:08 PM: It’s interesting to watch Battier/Perkins match-up. Yesterday Perk said that he finds it “disturbing” that Battier is on. He’d like to see the ball in the post more when that happens.

9:18 PM: Since calling a timeout after falling behind 13-3, Miami has had a lot more energy, attacking the rim. Scores stands at 15-10 now, and Serge Ibaka is on the bench with two fouls.

9:20 PM: LeBron went after that pass like he did some flag football ones back when KD’s team played Bron’s during the lockout.

9:21 PM: Frantic sequence there had the fans on their ooh and ahhh toes. Meanwhile, the Heat might not have a top-2o point guard on their roster, but they have at least three guys on the team (Wade, LeBron and Rio Chalmers) who can zipline a pass through traffic on a pick and roll.

9:23 PM: Russ Westbrook off to a pretty fast start, with 8 points and 2 dimes. While he was warming up before game, a group of fans were heckling him. He laughed it off then, and he’s laughing at them right now.

9:29 PM: How Norris Cole got his groove back? By going back to his college flat-top box cut. When I asked him before the game if he was trying to get his triple-double mojo back from Cleveland State, Cole laughed heartily.

9:36 PM: Despite the large deficit, the Miami fans are on their feet. Such a different atmosphere than last year’s Finals.

9:41 PM: Houston (or should I say OKC), we have a ball game. Lead down to seven for OKC after a quick spurt my Miami.

9:42 PM: Nick Collison leads the Thunder with six points off the bench. James Harden, however, is still sort of AWOL. He has two on 1-3 shooting.

9:45 PM: LeBron has been playing BIG again tonight. Been battling in the post and has five boards. Whereas when his jumper was off last Finals and he struggled, he’s adapted this time around and is scoring and contributing around the cup.

9:47 PM: With that Dwyane Wade three, we have ourselves a tie game.

9:49 PM: A Harden three pushes the lead back to five, 40-35, and Miami burns a quick timeout to reassess the situation. LeBron looks dog tired right now on the bench.

9:51 PM: If Dwyane Wade wasn’t officially hurt coming into this series, he is now. Trainers appear to be looking at his back. (He stays in the game, though.)

9:54 PM: I know he spent a lot of time on the bench with two fouls, but that was Serge Ibaka’s first shot. He needs to be more active. Needs to make Mia’s bigs work on that end of the court.

9:57 PM: I’m not sure any member of the Heat plays to the crowd better than Bosh.

9:58 PM: It took Durant nearly 20 minutes of PT tonight to get called for his first foul. He might not be happy with the charge call, but not as bad as it’s been for him previous two games.

10:03 PM: James is two points, two assists and four rebounds from a triple-double. For them to win tonight, they’re gonna need one from him.

10:04 PM: Battier just had a great defensive possession. First he denied KD the ball, and then he fell on the loose ball. And to top it off, then he got tangled with Westbrook, who looks mighty upset at him.

10:20 PM: Miami won that second quarter, 27-16. That is their best non-first quarter since the Finals began (at least in terms of point differential).

10:28 PM: After Miami took their first lead since the opening seconds, Killa Durant answered with a nice, calm three.

10:29 PM: No one has worked harder or studied more film that Kendrick Perkins this series. Unfortunately, things aren’g going his way, proper matchups aren’t necessarily there. It’s not for a lack of effort, though.

10:31 PM: Take a second and appreciate this ball, folks. It doesn’t get any better than this. Game’s being played at the highest level by the best players on the biggest stage. Hasn’t been the case all series (or game).

10:33 PM: OKC needs more on defense from Thabo Sefolosha, and more on both ends from Ibaka. KD and Russ can’t do more than they already are. Heat have their largest lead of the game, 64-60.

10:38 PM: LeBron getting physical with Kevin Durant. It’s like one writer who I respect said at shootaround this morning, It’s Game 4 of the Finals, people need to start knocking people to the floor.

10:40 PM: The refs seem to be waiting to see if the ball goes in or not before making their call. It’s sort of weird, sort of like you’d see at the Y.

10:42 PM: Of course, Battier answers with a three, and crowd gets loud as it has in a while.

10:43 PM: Dunno why it took me so long for me to notice, but there are  a pair of fans sitting behind OKC’s bench, wearing Payton and Kemp Sonics jersey, waving a yellow Seattle towel/fleece.

10:46 PM: Miami leads 71-68, with three-plus minutes to go in the third. Of late, refs have taken control of game, effecting the flow severely.

10:47 PM: Miami is in the bonus, and there are still three-plus to go here in the third.

10:49 PM: OKC’s bench and depth are supposed to be their strengths. Well, thus far tonight bench has tallied 14 points. Meanwhile, Miami’s has 11 of their own.

10:53 PM: This game has followed a script that’s totally strayed from previous three games. Instead of Miami salting away a lead, OKC’s done just that. They now trail by five, 77-72.

11:04 PM: Rio Chalmers handles are underrated, at least by me. He has that ball on a string in traffic tonight.

11:11 PM: Russ is putting the Thunder on his shoulders right now. He has 37, and they’re within 2. He’s getting to the cup, same as past few games, tonight he’s just finishing better.

11:16 PM: OKC has hit three threes so far this game. Miami’s connected on nine of them.

11:17 PM: After falling to the floor, Bron didn’t make it back on defense. His reward? a cherry-picked bucket. Not a fan of getting rewarded for not playing D, but oh well. Worked out in this instance.

11:18 PM: Umm, LeBron was just carried off the court. Stays on the bench, though, no locker room visit.

11:20 PM: James seems to be stretching his leg on the sidelines. Maybe serious, maybe nothing. Will let you know soon as we’re told something.

11:23 PM: Real talk: Battier can’t guard Durant without fouling him. It’s up to the refs, however, to decide whether they want to call it or not.

11:24 PM: As LeBron heads to scorer’s table to check back in, crowd picks up on it, goes wild.

11: 25 PM: My man with the PA mic needs to chill. He’s drowning out the fan noise with his overly loud voice.

11:32 PM: Is LeBron hurting so bad right now that it’s a Rookie of the Year situation? He can’t actually do anything, perhaps, but you still have to respect him just in case. I’m not saying that definitively, just asking.

11:34 PM: Rio Chalmers just blew by Russ. For all the crap he takes from his teammates at times, Chalmers is a big-time player. See 2008, NCAA title game, if you have any questions. Miami leads by five, 101-96.

11:36 PM: Westbrook with another driving bucket. I can’t wait to see how somebody tries putting tonight’s loss on Russ.

11:38 PM: WoW. Miami takes Game 4. They now have a chance to close out the series at home on Thursday night. I’ll be back then, and so should you.