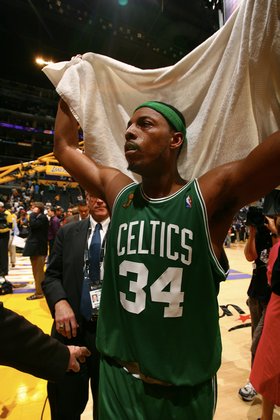 The noise, or lack thereof, is really quite awful.

When the air is completely taken out of a building; when you can actually feel the life being sucked from the bodies of nearly 20,000 people. That’s what it was like last night inside the Staples Center, as we helplessly looked on and saw our beloved Lakers give up a commanding 24-point lead, and their championship hopes in the process.

The slow, long, and shameful walk out of the building was equally torturous, as the elevators and stairways were packed with long faces, people shaking their heads in utter disbelief at what they had just witnessed.

It was one of the worst Playoffs losses in franchise history, and it hurt like hell.

From the start of the evening’s festivities, there was no indication that this would be anything but a joyous Laker victory.

The crowd was ear-splittingly loud (randomly starting up inspired “Boston Sucks!” chants and a derisive “Wheelchair” one for Paul Pierce), and after a stirring National Anthem, the Lakers immediately jumped on the Celtics – led by a rejuvenated Lamar Odom – and looked as though they would completely blow them out of the water.

(The part of the arena where my brother and I were sitting was full of interesting and colorful characters. There was a guy to our right who took off his shirt as soon as he got to his seat, revealing a torso full of tattoos.

When he stood up and turned around, it became quite clear that he had once taken a bullet to the left side of his lower back. Needless to say, very little eye contact was made with this man.)

It began slowly of course, the collapse, as Boston methodically chipped away at L.A.’s lead right before the halftime break. When things began to look a little dicey, Jordan Farmar raced down the middle of the court and hit a running banker to beat the buzzer at the end of the second quarter.

It was the last feel-good moment of the game for the Lakers and their fans.

In the second half, things completely unraveled, L.A.’s players couldn’t hit a shot to save their lives, became allergic to the paint, and the Celtics began connecting from all over the floor.

And what to make of Kobe Bryant? On the biggest night of the season, he was, quite simply, ordinary. His shooting percentage was ghastly, and he played with the energy of someone who was about to undergo a root canal.

The big lead – and the resulting lack of urgency – put Bryant’s guard down, and when he realized that he would have to put on his Superman cape, it was too late. The damage had been done, and now, he must face another long and frustrating summer.

You’ve gotta give Boston all of the credit in the world. They did what they set out to do from the start of the year, faced enormous pressure along the way (from the press, the wildly passionate fans, and their own lofty expectations), and overcame plenty of obstacles – including their own head coach.

(Speaking of Rivers: His boneheaded refusal to yank Sam Cassell in favor of Eddie House became so absurd, that Laker fans actually gave him a standing ovation when they realized that House would be glued to the bench for long stretches of the game. It was one of the funniest things that I’ve ever witnessed.

Unfortunately for us, Doc eventually came to his senses and stuck with House for much of the second half, and the rest is history.)

The Celtics are clearly the better team – especially on the defensive end – and as much as it pains me to admit it, they absolutely deserve the championship they’re about to win.

I’m going to Vegas this weekend. Heavy gambling and strippers. Yeah, that sounds like the perfect remedy for a loss of this magnitude. And if that doesn’t work, I hear the holes in the desert are quite cozy.