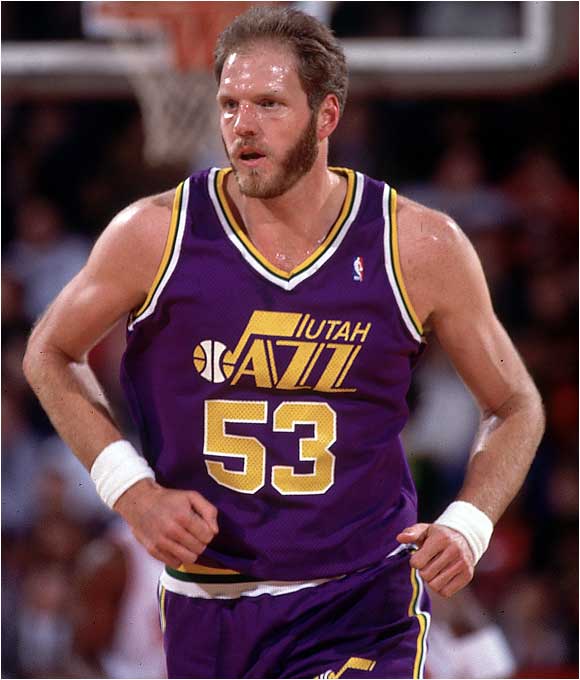 Not sure if most of you are aware of this or not, but former Jazz center Mark Eaton is having a movie made about his life. Mark Eaton? Yeah, the bearded 7’4 dude that MJ dunked on after Mailman taunted him for having dunked on the smaller Stockton on the previous play (consult your copy of Come Fly With Me for further details.)

Now, I have no doubt that Eaton’s story is compelling as hell, and I’m also certain that the entire state of Utah will turn out for it, but I just don’t think that too many other people are looking forward to seeing it. Can you say Straight-To-DVD?

This of course doesn’t mean that all films based on NBA players would be total flops, in fact I can think of a number of League personalities who could make for tremendous subjects on the silver screen:

1) Shaq: In a wildly competitive and oft-violent tournament (think Bloodsport), O’neal plays the foil to Kobayashi, the diminutive Japanese eating champ. Put your money on The Diesel, kids.

3) Ron Artest: QB’s Finest plays a disgruntled Circuit City employee whose only goal in life is to get that highly coveted 50% discount. Oh, and he’s also a member of the UFC.

5) Billy King: One man’s dramatic rise from relative anonymity to becoming the best executive in pro sports. Not based on a true story.

6) Stan Van Gundy: Everything you need to know about this film can be found in its title (The Hunt For Stan Van Gundy’s Carcass.)

7) Sam Cassell: After winning the World’s Best Looking Man award, Sam I Am spends the rest of his time wooing the planet’s foxiest ladies and modeling the latest underwear from Calvin Klein.

8) Lebron and D-Wade: Wise Lebron and Senile Dwyane in a space-age remake of Grumpy Old Men.

9) Andrei Kirilenko: AK47 and his pop star wife play worldclass assassins sent on an extremely dangerous mission by the Russian government. They have a fallout after Andrei gets a little too familiar with one of the ‘jobs’.

10) Gilbert Arenas: So many possibilities here, but if I had to choose the perfect role for Sir Gil, it would be that of a superhero blogger. His powers? Who cares! It’s Gil, blogging and in a movie. The possibilities are endless.