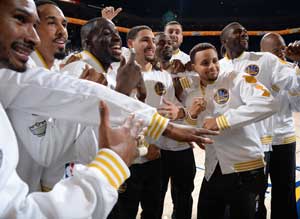 A compilation of the best images from the past seven days. The 2015-16 NBA season finally tipped off this week! From the Champion Warriors receiving their rings to Knicks rookie Kristaps Porzingis finishing a high rise and slam, scroll through all the images up top to recap the opening games.